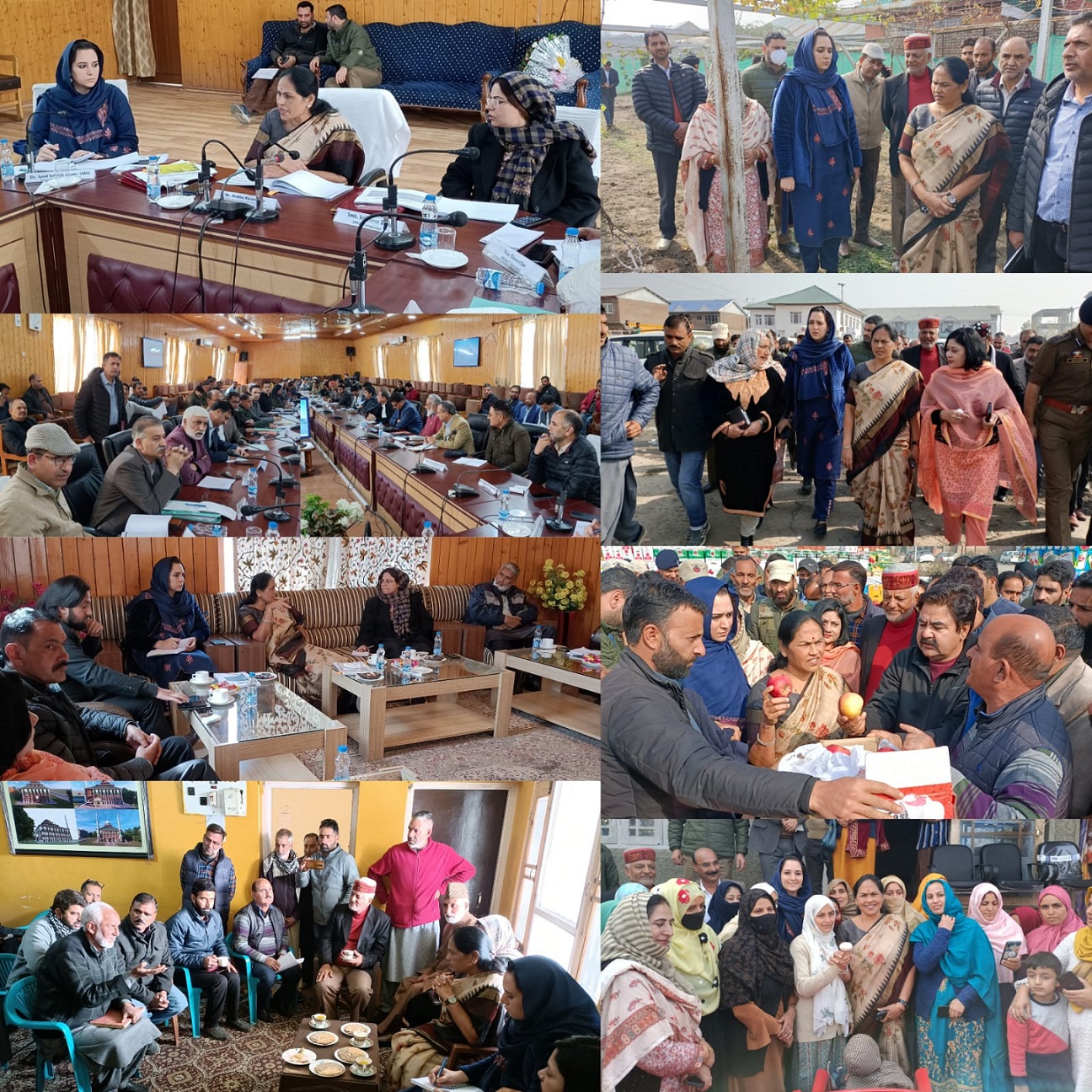 Reiterates that farmers welfare is among the top priority of the present dispensation. Says food processing units will be established in PPP mode to boost the growth of agriculture market in the UT

BARAMULLA, NOVEMBER 03: As part of Union Governments Public Outreach Programme, Union Minister of State (MoS) for Agriculture and Farmers Welfare, Shoba Karandlaje who is on two days visit to Baramulla, today took part in a series of events and activities during the extensive programme.

The Minister also visited developmental projects and took stock of development scenario of the district.

At the outset, the Minister paid visit to Fruit Mandi Sopore where she interacted with the Fruit Growers Association, progressive orchardists and farmers.

During an interaction, the representatives of Fruit Growers Association Sopore and district administration put forth some issues and demands which included establishment of food processing unit and cold storage units and highway upgradation for smooth transportation of fruits. They also appraised the Minister that sufficient funds should be made available for agricultural infrastructure development in Baramulla.

While reiterating that farmers welfare is among the top priority of the present dispensation under the dynamic leadership of Prime Minister Narendra Modi, the Minister affirmed that all the requests, issues and grievances projected have been noted and the same would be taken up at Union level as well as with Lieutenant Governor for redressal.

The Minister on the occasion reminded the fruit growers that the Central Government has taken the initiative of public outreach under which 70 ministers are visiting J&K with the view to assess the execution of developmental projects and implementation of various welfare schemes in the UT of J&K besides getting feedback and suggestion from the locals including farmers and other sections.

Later, the Minister also chaired an interactive meeting with several public delegations and PRI representatives at Dak Banglow here and heard various issues related to the developmental scenario of the district.

The Chairperson, District Development Council Baramulla, Safeena Beigh appraised the Minister about welfare measures of the farmers. Safina Beigh also highlighted the sale of spurious fertilizers in open markets which needs to be checked for growth of agriculture sector.

DDC Chairperson projected that farmers and growers need to be linked to science and technology for availing benefits under various farmer’s welfare schemes.

Assuring the representatives of timely resolution of their issues, the Minister said that the Union Government is actively working for the development of Jammu and Kashmir Union Territory.

Discussing other measures for farmers, the Minister also said that food processing units will be established in PPP mode to boost the growth of agriculture market in the UT.

The Minister also congratulated the PRI’s for successful establishment of a decentralized system and said that the present government is working to strengthen the PRI mechanism with more financial autonomy. She instructed them to identify their role and co-operate in the field of development.

Later, the Union Minister chaired a separate meeting with all the concerned officers in order to take a holistic review of pace of progress on some of the major development projects undertaken by different executing agencies in the district.

Deputy Commissioner Baramulla presented a district profile and briefed the chair of every sector including agriculture, horticulture and health.

On the occasion, the Minister stressed for incorporation of latest and modern farming practices like organic and sustainable farming which have the potential to create more and more opportunities for farmers. She also directed for educating the farmers with latest know-how in the field of agriculture besides disseminating awareness about welfare schemes on ground.

She laid emphasis on adoption of crop diversification, terming it as a viable option towards enhancing farming dividends.

Directors of Agriculture, Animal Husbandry and Sericulture departments, heads of concerned departments, engineers of line departments and district officers among other functionaries were present on the occasion.