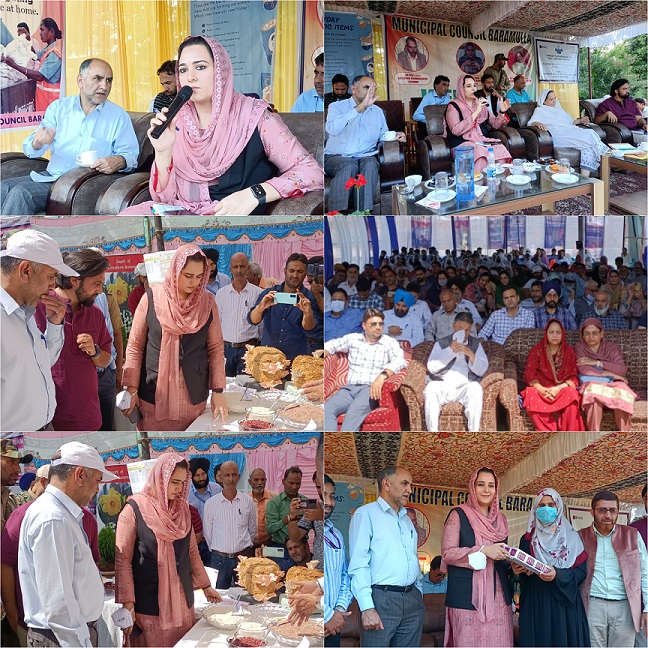 At the outset, Dr Sehrish inspected various stalls installed by different departments and directed the concerned Officers to raise awareness regarding the schemes on various platforms so that people can get to know about the benefits of the schemes and accordingly get benefited from them.

MCB Councilors, JDP Baramulla Mohammad Yousuf and Officers of line departments were present in the programme.

The programme witnessed participation of all the stakeholders from Baramulla who raised several demands and issues of public concern.

Delegations including Traders Federation, Gurdwara Prabandhak Committee and representatives from other committees attended the programmes and projected several demands including installation of street lights, Parking facility and deep drainage in Baramulla.

On the occasion, Dr Sehrish circulated NEET course material including a Tab among 26 NEET and JEE aspiring students for their offline coaching which was provided by Byju’s ed-tech company in collaboration with District Administration Baramulla.

Addressing the gathering, Dr Sehrish asserted that the concerns and issues of the public will be resolved in a time bound manner. She said that the District Administration has made all the services online for the convenience of people who can avail the benefits of the scheme while staying home.

During the programme, various cultural activities were performed by students of Blind school Baramulla and highlighted the importance of Nasha Mukt Bharat Abhiyan and Swachhata campaigns. A skit was also performed by the students of Deaf and Dumb School of Bramulla in which specially abled children highlighted the menace of drug abuse and importance of Nasha Mukt Bharat Abhiyan.

Speaking on the occasion, Director ULB Kashmir said that high mast lights will soon be installed in Baramulla town. She said that all the raised demands shall be taken up for execution through the process of proper planning. She assured that Baramulla town will be beautified in an exemplary way.

President Municipal Council Baramulla, Touseef Raina extended vote of thanks to the Chief guest and Director Urban Local Bodies Kashmir and participants of the programme.