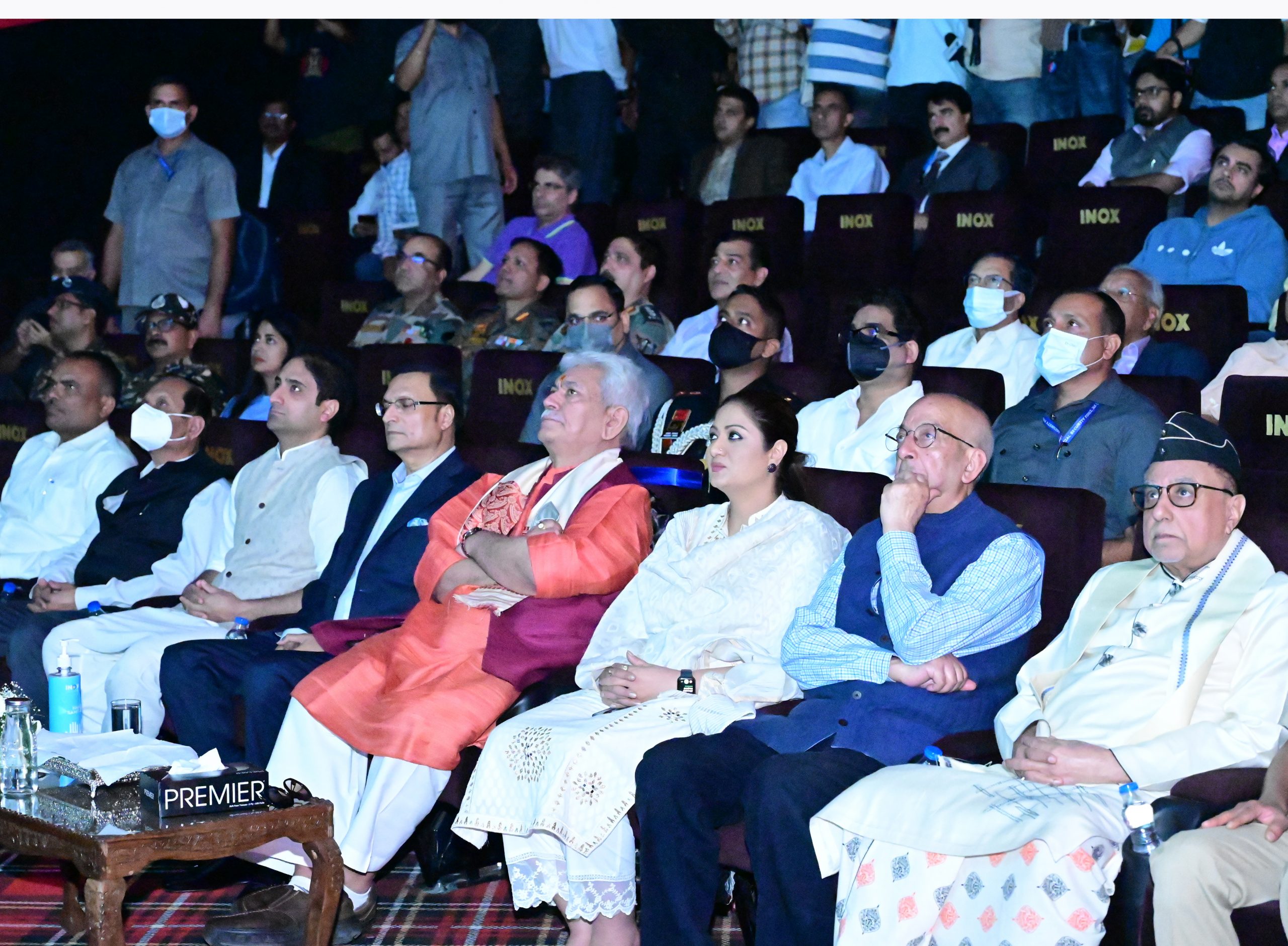 A major Socio-economic revolution is sweeping through J&K in the last 3 years. It is reflection of a new dawn of hope, dreams, confidence & aspirations of people: Lieutenant Governor

Congratulating the people, Sh Vijay Dhar & INOX Group on the occasion, the Lt Governor said that a major Socio-economic revolution is sweeping through J&K in the last 3 years and it is reflection of a new dawn of hope, dreams, confidence and aspirations of people, he added.

The Lieutenant Governor observed that the opening of multipurpose Cinema Halls in Shopian, Pulwama and the first-ever Multiplex Cinema Hall in Srinagar today marks the revival of cinema culture in the Kashmir valley after three decades, he added.

Culture is a way of life and Cinema being the powerful medium of sharing thoughts and ideas reflects societal values and change. Cinema brings people together. Apart from entertainment it gives hopes, dreams and inspiration to youth to pursue their dreams till they realise it,” Lieutenant Governor said.

Following the inauguration of two multi-purpose cinema halls in Pulwama and Shopian, the UT Government is building multi-purpose cinema halls in all the districts of J&K. Young generation have a strong urge to see a better society, to learn about other cultures, to become part of inter-dependent world. And, it is the responsibility of the administration to provide them opportunities and support,’ the Lt Governor added.

The new cinema halls and ongoing film shootings will renew the beautiful bond between Jammu Kashmir and the Indian Film Industry, he further added.

The Lt Governor said that the new Film Policy has been rolled out with special provisions and incentives for encouraging local youth to take up film as a career.

We are in talks with various stakeholders and have identified the land for developing Film City in the UT and the facility will come-up in the UT soon, announced the Lt Governor.

Under the guidance of Hon’ble Prime Minister Shri Narendra Modi we have accelerated the pace of implementation of numerous developmental initiatives.  After august 2019, a new social order has been established in J&K which promotes inclusive development, social harmony and equitable access to resources for all citizens without any discrimination. J&K UT is today stronger and more self-confident than ever before, the Lieutenant Governor said.

Sh Subhash Chandra, Former Member Parliament, Rajya Sabha and Chairman Essel Group, congratulated the J&K Government and everyone associated with the newly inaugurated multiplex on the occasion. He also lauded the UT Administration for the transformation taking place in Kashmir, through opening of cinema halls, which has a great legacy of film-making and a massive film loving population.

Sh Rajat Sharma, Editor-In-Chief and Chairman, India TV, said that the Cinema is the perfect medium to unite people. He appreciated the efforts of the Lt Governor and the UT administration for creating facilities to cater the needs of the Indian Film-Industry and reviving a new-era of cinema in Kashmir.

Sh Siddharth Jain, Executive Director, INOX Group, while speaking on the occasion, said that the launch of the new multiplex theatre in Kashmir will make the region be a part of country’s creative economy and contribute to strengthening the soft power of the country.

With ‘MYOUN INOX, MYOUN Cinema’, we are also looking to win the hearts of cinema lovers of Kashmir by offering them a world-class cinema-viewing experience, amalgamation of top-notch technology, great hospitality, best of cinema comforts, a blend of local designs, Dolby Atmos audio technology, latest 3D  & projection technology and a professionally trained team. We are also looking forward to taking our artistic learning from Kashmir to the world, he said.

Sh Vijay Dhar, Chairman DPS and owner of Broadway theatre expressed gratitude to the Lt Governor led UT administration and the INOX group for bringing back the joy of movie-viewing in cinema halls to Kashmir. He also threw light on the golden era of cinema and film-shooting in Jammu Kashmir.

To mark this momentous occasion, a special screening was held for the cinema lovers of the region.