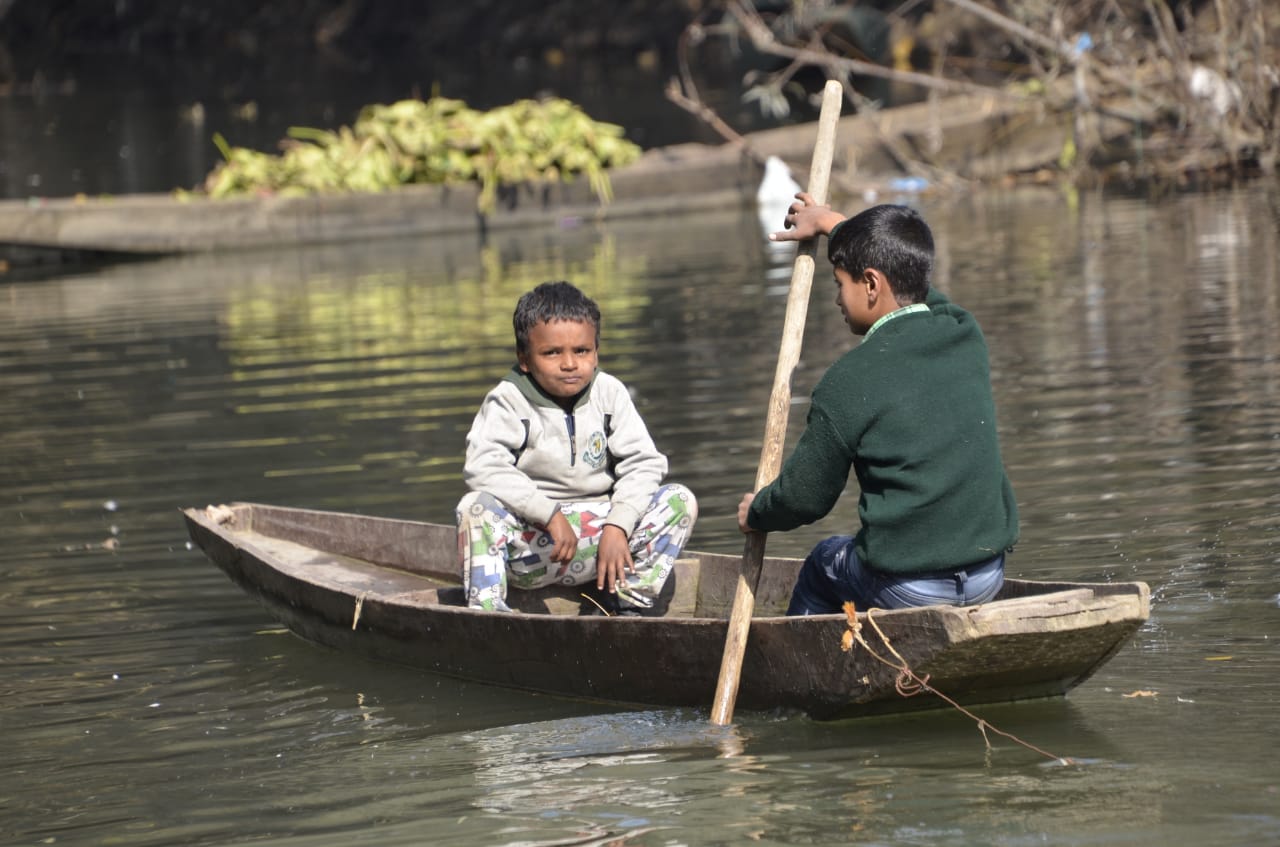 Once known for its pristine beauty, Wular, Asia’s largest freshwater lake, is now struggling to survive. It battles government apathy and pollution, which are slowly killing the lake’s ecosystem.

Wular’s Survival Struggle: Once known for its pristine beauty, Wular, Asia’s largest freshwater lake, is now struggling to survive as it battles tonnes of sewage and garbage that are slowly killing the ecosystem of the lake, which has shrunk to nearly half its original size due to administrative apathy, siltation and encroachment.

Wular, which was notified as a Ramsar Wetland in 1990, could prove a game-changer in reviving tourism in north Kashmir, but the local municipalities of Bandipora and Sopore are directly dumping solid waste into the water body on a daily basis. The lake was once the main source of freshwater as well as livelihood for hundreds of families in Bandipora and Sopore areas. It was also famous for producing high-quality fish and water chestnuts, but the production has declined steeply.

Imtiyaz Ahmad, a fisherman who lives on the shores of Wular, said the officials from Bandipora municipality dump garbage into the lake near Zalwan area during the nighttime or early morning. “Even the biomedical waste collected from the district hospital is also dumped into the water,” he said.

“Just a few years ago, the lake was crystal clear, and its water was used for drinking purposes. However, it is highly contaminated today and not suitable even for washing clothes and feeding animals, “he added.

Ishfaq Ahmad, a local from Sopore, told Kashmir Scan that migratory birds frequented the lake earlier were not spotted so frequently in the past couple of years due to growing pollution. “The lake contributes to 60 percent fish production in Jammu and Kashmir while at least 50 villages depend on the lake’s products ranging from fish, water chestnut, and Nelumbo,” he said.

Asif Ahmad, another local fisherman, said people also dump the corpses of animals in the lake, “There is a playground on the banks of Wular, but garbage is strewn all over it which is dumped by locals from adjacent areas during night hours.”

Adnan, a resident of Sopore, said the locals are facing a shortage of fresh water because they have stopped using water from the lake for household purposes. “The water is polluted because the lake has turned into a big dustbin. A lot of diseases have been reported by locals who consumed water from the lake,” he said.

In the wee hours, dozens of fishermen row their boats over the lake to catch fish and extract chestnuts. According to locals, nearly 90 percent of lake inhabitants depend on Wular for their livelihood.

But their problems have grown in the last five years due to rising pollution, which has also resulted in the death of many species. Abdul Rashid Dar, a resident of Sopore, said fishermen no longer catch many species of fish found in Wular, “It has affected our livelihood,” he said.

“The National Green Tribunal had directed Jammu and Kashmir admin to file an action taking report on the dumping of waste in the Wular lake.”

The lake is spread over 200 square km, covering almost 24 km in length, while its breadth is 10 km. However, the surface and surrounding marshlands have shrunk from 216 square kilometres (83 square miles) in 1911 to 104 square kilometers (40 square miles).

The Wular Conservation and Management Authority (WUCMA), which was set up for the lake’s conservation, is now conducting dredging operations for the lake’s restoration. According to WUCMA officials, the work has been taken up on a large scale after the UT administration sanctioned Wular Action Plan for Rs 200.00 crore to conserve and manage the lake.

While dredging has been completed on 1.5 sq km of lake, the encroachments on around 10 Kanal land have been removed. An official said there were approximately 90 Kanals of land under encroachment situated on the outer parameters of the lake.

Shakir Ahmad, an environmentalist, said the lake has a lot of importance for Kashmir and the country, as it is Asia’s largest freshwater lake. The people living on the banks of the river are wholly and solely dependent on it the lake. “Hundreds of animal and plant species live in the lake, which adds to its importance. When floods hit Kashmir in 2014, Wular took in all the flood water and saved the Srinagar city from a disaster,” he said.

Shakir said the uncooked flow of pollutants would have grave consequences on the lake’s future. “To avoid such possibility, the illegal process of dumping garbage and other wastage into the Wular must be stopped immediately. Several species of fish and plants in the lake are no longer seen now, and he added that they may have migrated or died because of the pollution,” he added.

Last year, Jammu and Kashmir High Court issued notices to the government of India and J&K administration on a Public Interest Litigation seeking directions for removing garbage dumped on the banks of Wular. The petitioners had demanded that the Municipal Council Sopore be asked to stop the dumping of municipal solid waste on the Ramsar wetland site situated at Dharnambal-Ningli Tarzoo in Sopore, which falls within the delineated periphery pillars of the WUCMA and also within the limits of Hygam-Ningli-Tarzoo Tourism Development Authority.

The plea urged developing the area given its huge tourism potential while taking care of the environmental sensitivities. It is also a place to be identified and subsequently set in terms of Solid Waste Management Rules for dumping municipal waste away from residential and environmentally sensitive areas.

The petitioners had alleged that the Municipal Council Sopore, since March last year, has started dumping solid waste on the boundary of the Wular Lake against the Solid Waste Management Rules. The area, which was earlier identified as the only recreational park, was surprisingly converted into a dumping site without following the rules or taking any NOC permission from the Pollution Control Board or WUCMA.

The National Green Tribunal (NGT) had directed the authorities in Jammu and Kashmir to file an action-taking report on the alleged dumping of solid municipal waste in the Wular Lake. “Since the land in question belongs to the Forest Department and comes under the immediate control and management of WUCMA and HNTDA. Therefore the respondent Municipal Council needed prior permission from the said authorities before dumping the municipal waste on the banks of Wular Lake.”

“The area is environmentally sensitive, and in terms of Wetland Conservation and Management Rules, 2017, no such activity can be undertaken by the respondents in the area under any circumstances.”

“Given the allegation and photographs annexed, we find it necessary to require a factual and action is taken report from the member secretary of state Wetland Authority, Collector of Baramulla, and the state Pollution Control Board before the next date,” the tribunal had said in a two-page order.

In April last year, J&K Pollution Control Board (PCB) imposed a penalty of Rs 64 lakh on Municipal Council Bandipora for violating Solid Waste Management Rules. The PCB said the illegal and unscientific dumping and disposal of solid waste by the Municipal Council Bandipora were received with photographic evidence, and the matter was accordingly taken up with the concerned Deputy Commissioner, Director Urban Local Body, and Executive Officer MC Bandipora through a series of communications but without any tangible improvement on the ground.

Due to the “continuous failure” of the Executive Officer MC Bandipora to dispose of solid waste scientifically, a show-cause notice for levying environmental compensation in light of the directions of the National Green Tribunal was served upon the Executive Officer Municipal Council Bandipora, asking him to show reasons within 15 days as to why the environmental compensation be not levied upon him for these blatant violations of Environmental Laws.

“Regional Director PCB has also received photographic evidence indicating that the concerned municipal body brought about no improvement on the ground and the solid waste is continuously dumped at Zalwan Nassu site in close proximity with the district headquarter Bandipora and on the catchment of Wular Lake near Zalwan Nallah in a haphazard and unscientific manner,” it reads.

However, MC Bandipora said they are not dumping municipal waste in the Zalwan area or around the Wular lake. About the PCB fine, they said they have filed a case in court on the issue under process.