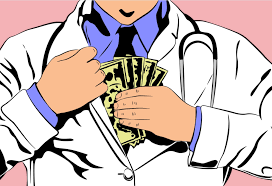 The tragic death of an infant child at Lal Did hospital, who was denied access to medical care unless parents bribed the security guards, illustrates the moral degradation of our society, writes Abid Hussain Rather

The Illicit ‘Chai’. The tragic death of a sick infant child two months ago at Lal Ded Hospital in Srinagar took Kashmir by storm when it was revealed that his ill-fated parents were refused entry by the hospital’s security guards for the sake of a few hundred rupees. It was not the first incident of its kind.

A similar tragedy unfolded at the same hospital sometime back when a pregnant lady from Kupwara was denied entry which resulted in her delivering the baby on the roadside outside the hospital.

Such episodes have occurred recurrently in our valley in the past, and they will continue to take place in the future as well.

I am not an astrologer, nor do I believe in predicting the future by calculating the alignment of stars. But my harsh past experience compelled me to argue that we have to prepare ourselves for such eventualities as our society has been complete moral degradation due to materialism.

In Kashmir, humanity has become an endangered concept. We are being preyed on by the vices of materialism, dishonesty, selfishness, falsehood, immorality and corruption. We have fallen from the standards of humanity and turned into beasts without emotions. History shows that human values are eroded whenever a society starts believing in material instincts, and human life is least valued.

In such circumstances, tragedies become common and also unsurprising to many.

The occurrence of tragedies like the one which unfolded at Lal Did hospital testifies that we live in a society where there are only humans and no humanity. Our valley has become a den of corruption and bribery, and we have normalised these practices in our society. There is no government department or private institution where moral and financial corruption doesn’t exist, leading to the violation of the rights of people. The irony is that such social evils are no longer considered wrong or sinful.

The tragedy at Lal Ded hospital should become an eyeopener and serve as a wake-up call for common people as well as the government to curb the social evils prevailing in our society. When we keenly look at this event, many questions arise in our minds. Was it the first time when an employee of the hospital asked for ‘chai and mithai’, or did this illegal custom prevail elsewhere too?

“This malaise comes to the fore only when it has already resulted in tragedies. If anyone tries to tackle the corruption, protest or raise the alarm, there is nobody to pay heed to their acts.”

We are well aware that it is not only the Lad Ded hospital but also most healthcare institutions in our valley involved in this illegal and inhuman custom. In fact, this malaise prevails in most government departments, which has resulted in innumerable suffering for the masses. Unfortunately, the concerned culprits have normalised this evil, and no one complains about it.

If anyone tries to change the system, protest, or raise the alarm against these social evils, nobody pays heed to their words. This malaise comes to the fore only when it has already resulted in tragedies, like the one that unfolded in the premises of Lal Ded hospital a few days ago. Secondly, we need to ponder whether only the lower grade employees are involved in this ‘chai mithai culture’, or the higher officials wielded the sword of apathy.

How is it possible that a lower grade employee of any department can gather the courage to indulge in such heinous crimes? So punishing or terminating the service of only a lower grade employee can’t help eradicate this crime. Instead, the higher officials should be held equally responsible for these immoral acts and should be punished by the government authorities. Since the higher officials are caretakers of their departments, they are responsible for overall affairs and tragedies.

The government has taken different steps and adopted various strategies, but they have hardly abolished this ‘chai and mithai culture’. Instead, it is gaining popularity in Jammu and Kashmir. It has turned out to be a black spot on our society and puts a question mark on humanity. Sadly, mostly the lower section of our society falls prey to these evils. Unless and until every government employee, from higher rank to a fourth-grade gatekeeper, involved in this heinous crime are not strictly punished, such tragedies will continue to take place.

There should be a strict system of scrutiny in every government department to check these practices. Finally, a society is a combination of individuals. Every individual has his or her role in eradicating social evils and taking steps to make it a better place for one and all. So, all of us must awaken our conscience and imbibe a sense of humanity to stay away from these social crimes so that we can develop an evil free society. To begin with, moral education in educational institutions can help obliterate these social evils from our society.

(The author can be reached at [email protected] )