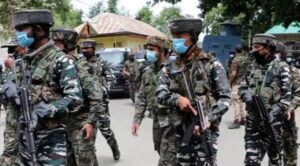 Srinagar: Police on Wednesday said that one of the oldest commander of Hizb-ul-Mujahideen for North Mehraj ud Din alias Ubaid was killed in a gunfight at Pazipora area of Kralgund in North Kashmir’s Handwara. Quoting Inspector General of Police Vijay Kumar, the police spokesman on official Twitter handle said, ” One of the oldest & […]