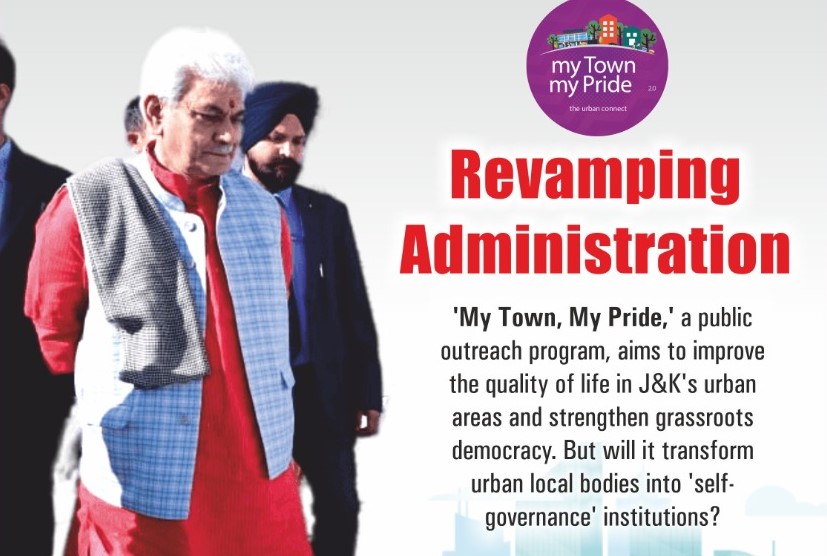 ‘My Town, My Pride,’ a public outreach program, aims to improve the quality of life in J&K’s urban areas and strengthen grassroots democracy. But will it transform urban local bodies into ‘self-governance’ institutions?

The second edition of ‘My Town, My Pride,’ a flagship program to strengthen grassroots democracy and improve service delivery, concluded in Jammu and Kashmir on December 6. Senior officers of the administration presided over public outreach camps in all the urban areas during the program.

J&K’s Housing and Urban Development, the nodal department for the program, organised dozens of camps at the two Municipal Corporations in Jammu and Srinagar, 19 Municipal Councils, 57 Municipal Committees, and other places across J&K where the visiting officers appointed by the government held public interactions, collected feedback and also participated in preparing draft plans for developmental activities.

“We interacted with the public to get a perspective of the issues facing the area. It was a very productive exercise which has reduced the gap between people and administration,”Revamping Administration

On the first of the eight-day program, the government departments such as PWD, Jal Shakti, Food and Civil Supplies (FCS), Revenue, Health & Medical Education, School Education, Handloom/ Handicrafts, Social Welfare, Youth Services, and Sports, Horticulture, Floriculture, Labour, Transport and others set up stalls in urban local bodies and other areas to create awareness among people about the government schemes and their deliverables.

The guidelines were clear; identify the five most important issues raised by people in their meetings with the district administration and the visiting officer, the details of the resolution passed in the meeting, and whether the urban local bodies have solid waste management facility. The officers were also asked to provide details about the places they visited during the program and the list of ongoing works inspected by them, along the details of events organised during the program.

“Most of the issues raised by people are related to sanitation like drains, street lighting, and others. Youngsters wanted to know about self-employment schemes. The response of people was very good, and they were very forthcoming in their demands,” said Masarat Hashim, the visiting officer of a town in central Kashmir’s Budgam district.

A senior government official said that seven draft plans by each urban local body were prepared with the respective deputy commissioner leading the discussions along with the visiting officer. At the same time, public representatives and locals were also asked to give their feedback and suggestions.

“We interacted with public representatives, government functionaries, social activists, and prominent citizens, among others, to get a perspective of the issues facing the area. It was a very productive exercise,” Hashim, who is presently posted as Additional Secretary in GAD, said.

The officers also inspected government assets like community halls, schools, health institutions, banks, water bodies, waste-management facility, public toilets, and important private places, among others, to get the real picture of the state of governance and the progress of developmental projects.

The government has ordered the visiting officers to mentor their respective ULB as ‘Prabhari Officers’ for the next year.

There are fears that the projects proposed by the visiting officers often run into administrative issues with the executing departments unwilling to give their approvals, “Most of the projects go the R&B department which sleeps over them, leading to the lapse of funds and other problems,”

According to the policy document, the visiting officers were asked to focus interactions on urban issues, including education, nutrition and health of children, women empowerment, general cleanliness, solid waste management, and water conservation.

The administration had also asked the visiting officer to ensure that the heads of the urban local bodies, such as the Mayor or President, were “given due importance and the approach should be to strengthen them and make them feel empowered,” a move aimed at strengthening grassroots democracy in Jammu and Kashmir.

“There are two sides to the program; one is to focus on improving connectivity, drinking water, electricity, and other civic amenities, expanding green spaces and improving the overall quality of life in J&K’s urban areas,” the officer quoted above said.

He added: “On the other hand, the administration gets a ground zero report about the concentration of various welfare schemes and other initiatives which are aimed to uplift the poor and empower the youngsters.”

Talat Parvez Rohella, Secretary of the Hospitality and Protocol department, also said that the main issues highlighted by people during ‘My Town My Pride’ were related to urban mobility and sanitation.

“Many people complained of traffic congestion and some local issues. But there were specific demands concerning the livelihood of youth. I met scores of youths who were looking for livelihood opportunities,” Rohella, who was the visiting officer of Pulwama, told Kashmir Scan.

The official said that the draft plans would be submitted to the government by visiting officers. “Once the plans have been received, the government will transfer funds for their execution on the ground. This will build trust and also help the administration in revamping its image in the people, which has suffered a dent due to successive governments in J&K over the past three decades,” the official said.

However, there are fears that the projects proposed by the visiting officers often run into administrative issues with the executing departments unwilling to give their approvals, “Most of the projects go the R&B department which sleeps over them, leading to the lapse of funds and other problems,” said a corporator from north Kashmir.

Hashim, however, said that the local bodies have been made a focal point for executing and implementing the government’s developmental projects in urban areas.

“The decisions which affect the lives of people should be made at the basic level. The 73rd and 74th constitutional amendments have given these local bodies a constitutional status. The government has strengthened them through the delegation of financial powers and functions, and training and capacity building so that they can function as self-governance institutions,” he said.

“Once the harmony is achieved between ULBs and the government departments, it will usher a transformative change in improving the quality of life in urban areas,” he added.