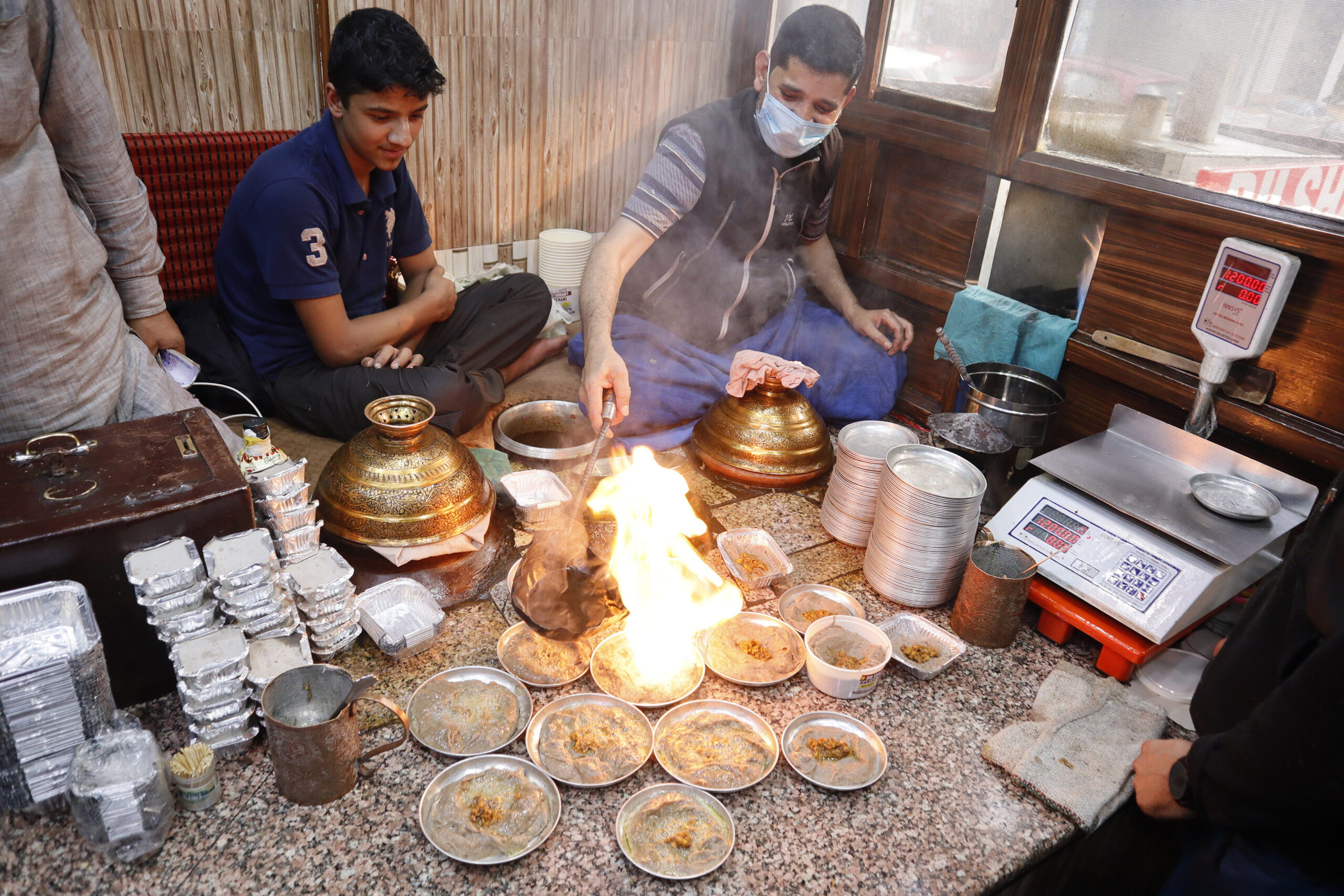 Owing to the hot nature of Harisa, it is only made when the mercury drops in Kashmir. The zesty seasonal diet helps to maintain body temperature during freezing Himalayan winter.

Capable valley chefs make a scrumptious winter delicacy, the exotic dish Harisa with excellent culinary skills. This classic cuisine connects people to their roots and is presented in a pleasing fashion that delivers exquisite taste. Harisa, once much liked by high society, has become a popular winter dish in today’s Kashmir.

Harisa is now being prepared and sold in every lane of small and big towns of Kashmir. Also, some people like to cook it in their houses. A few young entrepreneurs offer door-to-door service in the capital city. The culinary artists in new food outlets take good care of hygiene, quality check, taste, and plate presentation to serve customers in a decorative style to enhance aesthetic appeal. But the Harisa you get to eat in the old city (Shahr-e-Khaas/ Downtown) is very special.

Shah-e-Khaas, a part of the extended Srinagar city in past served as the imperial capital and a royal residence for many centuries. This place has kept traditional art and crafts alive besides achieving mastery in making conventional dishes of Kashmir. The traditional way of making and serving Harisa can only be seen in the downtown area of Srinagar, where some families have been associated with this inherited business for centuries. They make this dish in earthenware and serve it to consumers on copper plates. Since the dish was introduced in the valley, the people of this place went on with this profession as they acquired it from their forebears.

The Valley occupants believe in the hot and cold nature of foodstuff. Walter R. Lawrence writes, ‘the Kashmiris consider all kinds of grain to be either hot or cold and believe in the mixing of cereals, pulses, vegetables, and fruits. This is true; even today, we think and do the same. Owing to the hot nature of Harisa, it is only made when the mercury drops in Kashmir. The zesty seasonal diet helps to maintain body temperature during freezing Himalayan winter.

Shah-e-Khaas, a part of the extended Srinagar city in past served as the imperial capital and a royal residence for many centuries. This place has kept traditional art and crafts alive besides achieving mastery in making conventional dishes of Kashmir.

There are wide varieties of Harisa and different ways to prepare it worldwide. In Kashmir, too, a fine type of Harisa with a unique style is traditionally made for centuries. The Harisa makers of downtown have a specialty in making Zafrani Mutton Harisa. The main ingredients used in this dish are Kashmiri rice and Mutton, added with different spices, especially saffron.

Rice put in a big clay pot affixed to the hearth is cooked thoroughly until it becomes a paste, then added with lamb stew and spices, kept overnight after closing the lid tightly to generate steam inside the vessel helps to detach flesh from bones. In the last third of the night, the bones are removed and simmered again on low flame for hours. The dish becomes ready to serve on the breakfast table with proper mincing and continuous stirring.

A thick porridge is served hot, topped with Kabab, Methi Maaz (sauce made of meat), and thinly sliced onion or shallots, the final touch with piping hot oil or ghee gives it a pleasant look. The luscious morsels of food are eaten with a tandoori roti, locally known as Girda. A detailed procedure to follow makes it challenging to cook, and it takes almost an entire day to prepare it, but it sells out shortly after it is made. With the crack of dawn, people in Srinagar throng to Harisa shops, stand in long queues, and wait for their turn to chomp happily the hot-flavoured Harisa.

In an interview, I heard an old cuisinier carrying forward his family legacy, who owns a Harisa shop somewhere in Shahr-e- Khaas saying these lines while pointing his wooden spatula toward loaded plates.

“This is called Harisa, a saffron-flavoured dish. A gift from Iran to the people of Kashmir. Keep in your mind this shop is very old and has been serving this dish for a long time. Well-off families eat this recipe, and if older people eat it, they will become young again. This is saffron-flavored Harisa…”

With the inrush of substantial people from west and central Asia after the beginning of the medieval era in Kashmir, the contacts with the Muslim world became stronger. Carrying on old customs, the Kashmiris lent space to accommodate new things and ways imbibed from foreign lands.

The Persian culture had a great impact on Kashmir culture. It greatly affected society and left impressions on many things such as food, dress, language, etc., which is why it is sometimes called Iran-e-Sageer. Many shop owners in Srinagar who inherited this tradition for many generations believe this a gift from the Shah of Hamdan, popularly known as Ameer Kabir, who visited Kashmir many times in the 14th century. Introduced in the Sultanate Period (Shahmiri Dynasty), it gained popularity with time. A. M. Mattoo, in his book Kashmir under the Mughals, A. M. Mattoo writes, ‘A brothlike dish of Mutton, rice, and spices called Harisa was sold in the city during winter months and relished by all sections of the society.

The Persian culture had a great impact on Kashmir culture. It greatly affected society and left impressions on many things such as food, dress, language, etc, which is why it is sometimes called Iran-e-Sageer

In ancient records, we find many references to Mutton taken freely by people. However we know how it was being cooked, but need more information about varieties made from it. Marco Polo (13th century) tells us the food of the people was flesh with rice. Perhaps in the post-Sultanate period, many dishes were made of meat. P N K Bamzai writes, ‘The Mughals introduced their choicest cuisine, and the Kashmiri cook learnt the preparation of Goshtaba, Kabab and Rogan Josh.’ The protein-rich diet has great nutritional value. Besides Mutton, nowadays chicken and beef Harisa are quite famous. A large network of Harisa shops is spread across the state capital, and most of them are located in Shahr-e-Khaas. The owners of these shops generate good revenue by selling this special dish in winter. Though for a short time, both skilled and untrained labour doing such chores get employment and earn few pennies to spend the winter easily. The recipe brings happiness everywhere, from its maker to eaters.