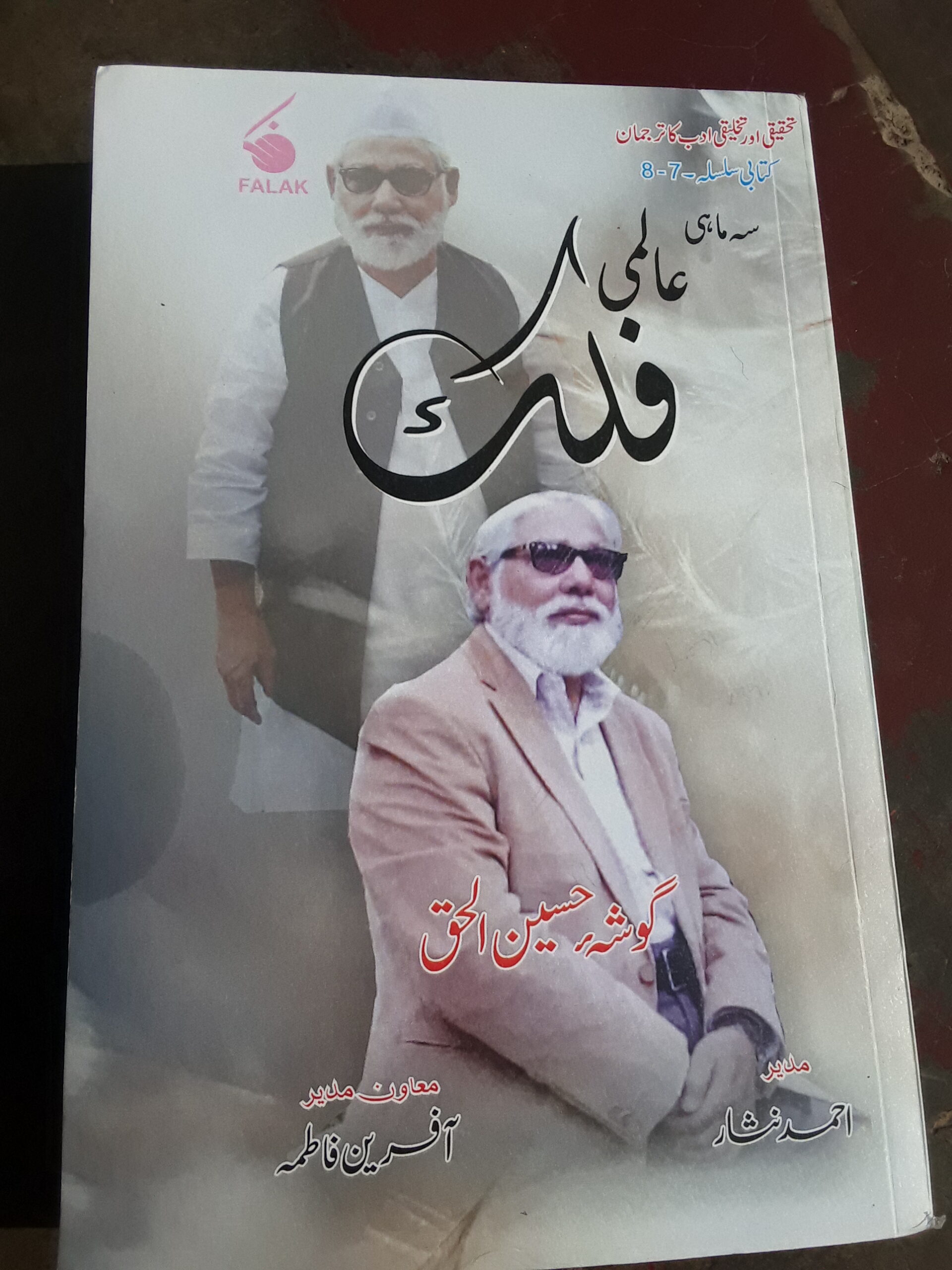 Aalami Falak is a quarterly research journal of Urdu published in Dhanbad Jharkhand. The journal’s editor is Ahmed Nesar, and its assistant editor is Afreen Fatima. Its book series 7-8 from April to September 2022 has been specifically published, highlighting the contribution and services of Hussain-ul-Haq for the promotion and development of Urdu literature. I received this special number through a post from Ahmed Nesar, the journal editor. Its cover page is beautifully designed, and the paper used in the book is of excellent quality.

The journal’s writings are so beautifully printed that it speaks volumes about the book’s quality. This special number about Hussain-ul-Haq is spread over 320 pages. The first six pages highlight the contents of the book. The first content of the book, on page 7, starts with a poem describing the praise for almighty Allah composed by Fiza Ibni Faizi, followed by another poem, a naat by Muswir Sabzwari.

In the editorial of the book, Ahmed Nesar says,” due to lockdown, it was utterly difficult for us to publish the issues regularly, and we were compelled to publish two numbers in one go so that in future it won’t be cumbersome for us to publish its regular numbers. Dr. Sarwar Hussain has written a detailed article about Urdu as the second official language of Jharkhand. Sarwar Hussain writes, ” like Bihar, Urdu is the second official language of Jharkhand also. ln Bihar though it is promoted at government level, in Jharkhand, it has met stepmotherly treatment”. He further says, “

In Bihar, many institutions and academies were created for the promotion and development of Urdu, like Bihar Urdu Academy, Kabina Bihar, Urdu Mashawarti Committee, and Urdu Directorate, but such steps were never taken in Jharkhand even after 21 years of its formation. About the life and contribution of Hussain-ul-Haq to the promotion and development of Urdu literature, this special number contains fifteen articles, two of which he has written. The first article, “Afsanon Ki Soni Soni Mehfil” is composed by Abdul Samad. He writes, ” remember one thing, Samad, I will never be fearful of death. To him, I replied. you will get well soon”.

He further says Hussain-ul-Haq wished to die between 65 and 70, and for it, he always prayed. The second article is composed by Ali Ahmad Fatimi about Hussain-ul-Haqs novel “Amawus main khwab“. Ali Ahmad writes, “in my own opinion, this novel best describes the bitter reality of life. It contains factual and real incidents. It also reflects the situation of present-day India and Indian Muslims “. Gazanfar, another writer, has written an article, ” Haq wale Hussain. “He has started with a poetic couplet of Shaharyar. ‘ Hussain ibli ali karbala ko jate thei, magar ye loug abi tak garon ke andar hain.

He writes, ” though This couplet is about Hazrat Hussain’s bravery and sacrifice, in today’s world also there isn’t a dearth of people speaking the truth, raising their voice against the atrocity and revolutionizing the lives of people. Among such brave hearts, Hussain-ul-Haq is worth mentioning. ‘Hussain-ul-Haq ke afsane’ is another compiled article by Prof Sageer Ifraheem. He writes, ” born in one of the Sahsram’s learned families, Hussain-ul-Haq has a mystic taste. In his fictional writings, we feel cultural and traditional aspects of Iran, Arab and Hind. In his fiction, there is a reflection of Qasasul Ambiya also. Hussain-ul-Haq is both a great novelist as well a fiction writer”. Mushtaq Ahmad Noori has composed an article, ” Hussain-ul-Haq ki Afsana Nigaari.”

In this article, he says,” in 1970, when Urdu fiction reached greater heights, a long chain of fiction writers from Bihar had played their vital role through their impressive writings. They had achieved leadership, and they continue to lead fiction writing. A well-known and prominent figure among those is Hussain-ul-Haq. To his side, many other writers like Showkat Hayat, Shafaq, Abdul Samad, Gazanfar, Mushtaq Noori, Syed Ashraf, etc too, have played a leading role in enriching the fertility of the Urdu world.

The writings of Hussain-ul-Haq are so wonderful that he has succeeded in gaining popularity among litterateurs”. Aziz Kasmi, too, has compiled an article, ” Hussain-ul-Haq- shehri dastan ka muazaz shahri” in this journal. He writes ” Hussain-ul-Haq is not only a literature, but at the same time he is also an educationist, orator, historian, leader, and critic.” Dr Syed Ahmad Qadri has written a comprehensive article ” Hussain-ul-Haq ke afsanvi safar ka tanqeedi jaiza” in this book.

In Bihar, many institutions and academies were created for the promotion and development of Urdu like Bihar Urdu Academy, Kabina Bihar, Urdu Mashawarti Committee and Urdu Directorate, but such steps were never taken in Jharkhand even after 21 years of its formation.

He writes ” Hussain-ul-Haq is a unique name in the world of literature. In 70s Showkat Hayat, Hussain-ul-Haq, and Shafaq, the three legendary literary figures, had infused a new life into the Urdu fiction of Bihar. His literary journey started when his first fiction,’ Jaise ko teisa’ appeared in Delhi’s weekly paper Teij in 1969″. Prof Aslam Jamshedpori has written a detailed summary of Hussain-ul-Haqs novel “Amavus main khwab”. According to Prof Jamshedpori ” Hussain-ul-Haq is counted among the popular fiction writers of 70s. His era was of modernism and post-modernism, in which the developmental movement received a major setback.

Hussain-ul-Haq is a distinguished name among the fiction writers of his era,”. Ahmad Sagheer has written a detailed four-page article about Hussain-ul-Haq. He writes, ” Hussain-ul-Haq is a legendary writer whose writings have revolutionised Urdu fiction. Born on November 02, 1949, at Sasram, he left this mortal world on September 23, 2012. He has so far compiled many fictional compilations, and in his fiction, one realises the nature and technique of writing fiction “.

Apart from the articles and essays about the life and literary contribution of Hussain-ul-Haq by well-known litterateurs, this book contains columns, short stories, poems, ghazals, and some summaries of the books also. It has four columns: Zia Farooq, Dr Afaq Alam, Dr. Sajid, and Dr. Haleema. It also contains six short stories(fiction) by Maiz Hashmi, Mehboob Pasha, Deepak Budki, Zainul Abidin, Syed Anjum, and myself, Rayees Ahmad Kumar. Many poems by Qazi Ansar, Kehkashan Tabasum, Parvez Shahryar, Ahmed Nesar, Noor Mohammed, and Dr Hafiz Karnataki have added flavour to the cuisine of this book. It also contains a band of fourteen Ghazals of prominent poets of India. Besides this, this book includes two Inshaya, ‘Chowda hazar fut ki bulandi’ by Dr Qaiser and ‘Retirement’ by Mohd Assadullah.