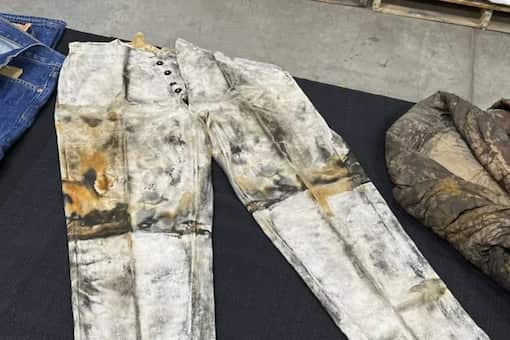 The pair of jeans was pulled from a sunken trunk in an 1857 shipwreck that occurred off the coast of North Carolina. The work pants have been sold for $114,000 (Rs 94 Lakhs).

Artifacts never fail to stun the world as they depict how life would be decades and centuries ago. Their values increase with time and people who are interested in keeping the antique items get them auctioned. Such is the case of the world’s oldest-known pair of jeans that was pulled from a sunken trunk in an 1857 shipwreck that occurred off the coast of North Carolina. The work pants have been sold for $114,000 (Rs 94 Lakhs), said the auction officials.

The white, heavy-duty miner’s pants have a five-button fly, and the pair was among the 270 Gold Rush era artifacts that were sold at a total of around $1 million in Reno, Nevada last week, according to the Holabird Western Americana Collections as reported by the Associated Press. However, there’s still doubt if the white pair of jeans were manufactured by Levi Strauss, one of the oldest and most famous jeans producers in the world.

It was because the jeans found after an incident traced back to 1857 predate by 16 years the first pair produced by the San Francisco-based Levi Strauss & Co. in 1873. Some even claim that the pricey pants are linked to Levi’s, a rich dry goods wholesaler at the time, and the pants could’ve been an early version of what can now be called ‘iconic’ jeans. But Tracey Panek, the company’s historian, and archive director report that any claims about their origin are still being ‘speculated’.

“The pants are not Levi’s, nor do I believe they are miner’s work pants,” she wrote to AP. The report also explained that there was no doubt that the pants were made before the S.S.Central America sank in a hurricane on September 12, 1873. It was packed with passengers who began their journey from San Francisco and were on their way to New York via Panama.