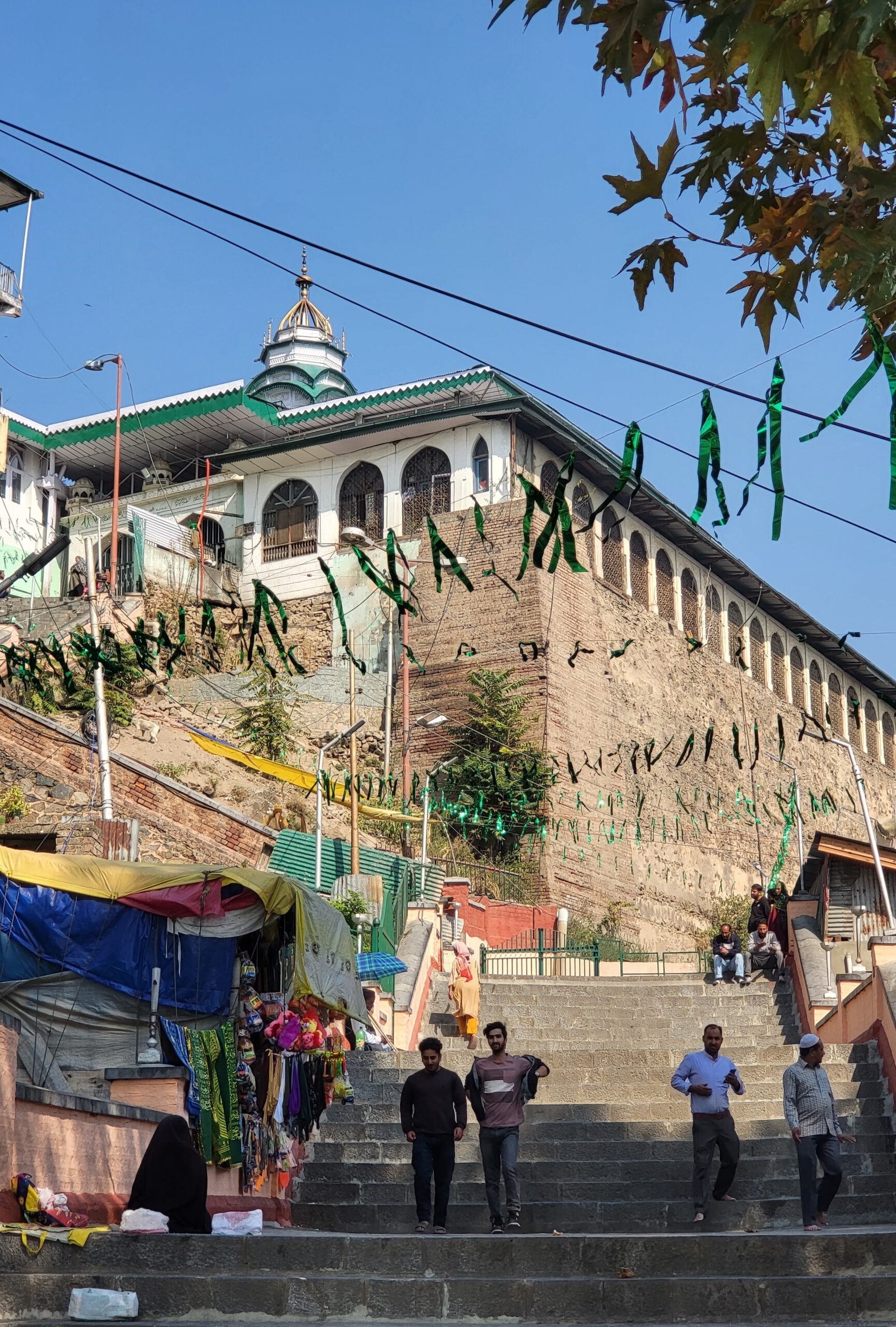 Hazrat Sheikh Hamza Makhdoom (RA), popularly known by the name Makhdoom Sahib in Kashmir, was born in 900 AH at Tujjar Shareef, a village in the Zanagir area of Sopore Kashmir. His father’s name was Baba Usman Raina, a wealthy and respectable person of the time and his mother’s name was Bibi Maryam.

Baba Usman sacrificed thirty sheep at the birth of his beloved son, and the meat was distributed among the poor, destitute, and needy people. Hazrat Sheikh Hamza (RA) was a born saint. Once his mother felt ill, and she couldn’t feed him her milk. Thus a woman in the neighbourhood was asked to feed him, and Hazrat Sheikh Hamza (RA) didn’t take her milk. When enquired, it was revealed that the lady had left her daughter at home and hadn’t sought her husband’s permission.

Sheikh Hamza spent his childhood at Tujjar Shareef, and he was not attracted to sports and games like other children his age. Once, he mixed with other children in the vicinity who were pelting stones at a mosque. Sheikh Hamza saw a dream the same night and was asked to refrain from this childishness. He immediately repented over it and never indulged in the same in the future. Sheikh Hamza received his elementary education from a local maktab. His teachers taught him Quran, its recitation, and grammar. He read all the Persian books like Karima, Namihaq, Gulistan, Bostan, etc.

Malik Zeeta Raina, the grandfather of Sheikh Hamza, took him to Srinagar, where he was admitted to Darushifa, the convent school of Hazrat Sheikh Baba Ismail Kubravi. Hazrat Sheikh imparted both religious and spiritual training to students. Sheikh Hamza developed a taste for literature and Islamic Studies and wrote Arabic Hazrat Sheikh Persian. He memorized the holy Quran and was later admitted to Shams Chak’s monastery. He learned the Quran, the Hadith, Jurisprudence, Logic, philosophy, and literature. He had a sharp memory and good comprehension.

Malik Zeeta Raina, the grandfather of Sheikh Hamza, took him to Srinagar, where he was admitted to Darushifa, the convent school of Hazrat Sheikh Baba Ismail Kubravi.

Sheikh Hamza kept fast invariably and burnt the midnight oil in remembrance of God. He got secret information from the saints and often had a vision of Hazrat Khazir. Sheikh Hamza (RA) mostly went to riversides, streams, and springs for his meeting and interaction. Once, he attended a feast along with other schoolmates. After meals, he was given some money also by the host. But during the night, through a dream, he was warned not to attend the feasts in the future.

The rulers of the times were of the Shia sect, and Sheikh Hamza met with a scholar, Mulla Shamshi Chack, who persuaded him to give up his Sunni sect and follow the Shia sect. He was impressed by the Shia leader but was in a fix. Therefore, he went to a mosque at Kohi Maran called Zakir Masjid. He kept an unbreakable fast and remained busy in remembrance of God for three consecutive days. Through the dream in the night, he got a reply. An immense gathering of people in the mosque’s compound was led by the Prophet of Islam (S) and all four other caliphs.

It was here that Sheikh Hamza (RA) saw the Prophet with four companions who told him that all four companions were correct and were directed to follow the path of Ahli Sunnat Wal Jammat. He made up his mind to follow the sect of Ahli Sunna Wal Jammat. He spent days and nights in worship and regularly bathed in cold water during winter to offer the Tahajud prayers. Sheikh Hamza (RA) was a great nature lover. Born among the mountains of Tujjar Shareef, he spent a lot of time in the hillock of Kohi Maran, where he enjoyed the breeze and natural habitat of trees, grass, flowers, etc. Due to continuous day and night worshipping, Sheikh Hamza (RA) often developed a constant headache. He was advised by Syed Ahmad Kirmani (RA) to have a stroll in the natural environment where he could relieve the headache.

Syed Jamaluddin Bukhari (RA) of Delhi, who belonged to the Suharvardi Lineage of saints, visited Madina Munnawara, and he dreamt a dream there. He saw Prophet PBUH talking to a young man. Upon enquiring from Prophet, it was told that the young man belonged to Kashmir and was the son of Baba Usman and spiritually the offspring of Prophet PBUH. The Prophet PBUH directed Syed Jamaluddin to go to Kashmir for the spiritual guidance of Sheikh Hamza (RA). He arrived in Kashmir in 932 AH, and Sheikh Hamza (RA) met him in the monastery of Malik Ahmad Yatoo. Syed Jamaluddin Bukhari trained and instructed him for six months, and after that, he returned to Delhi.

Sheikh Hamza’s (RA) residence Makhdoom Mandaw was the centre of enlightenment and spiritual training, because of which people from far and wide were attracted to it. He went too far-off places like Kamraj, and Maraj, where he constructed mosques and spread the teachings of Islam. He went to each corner of the valley to preach truth and brotherhood. Under his patronage, some famous mosques at Nadihal, Tujjar Shareef, and Wuhangam of Beeru were built. Sheikh Hamza (RA) displayed many miracles and supernatural happenings through his spiritual powers. Hazrat Baba Dawood Khaki has penned Virdul Murideen in praise of his mentor and guide, in which he has mentioned many miracles of his guide. Hazrat Moulana Feroze,

Sheikh Hamza’s disciple once lost his way in a desert. Then Sheikh Hamza (RA) came to his rescue while staying at Srinagar. Baba Ali Raina Sheikh Hamza’s brother once was in Arabia to seek knowledge. There was a hot rumour about his death in the valley. He was hearing this. Sheikh Hamza told people that his brother was alright. Later it was proved right when Baba Ali returned home safely. Haji Moosa, a Sheikh Hamza (RA) disciple to pilgrimage along with twenty other fellows on foot. Their expenses lasted just ten days in the middle of the journey. Haji Moosa turned up to his mentor, who helped him by appearing before him and handed over him a bag of gold coins. Many ailing persons recovered by his simple look. His benediction cured some suffering from fatal and acute diseases. A lot of others suffering from paralysis, leprosy, and hepatitis by cured by his prayers and blessings.

Hazrat Sheikh Hamza Makhdoom (RA) passed away at Makhdoom Mandaw on the 24th of Saffar 984 AH at the age of 84. He was bedridden for only a week. Khwaja Muhammad Tahir gave gussul to his body and also led the funeral prayers. His funeral was taken to Kohi Maran from Eidgah, in which Ali Shah Chack, the ruler of the time, too participated. Hazrat Sheikh Hamza Makhdoom (RA) didn’t marry and thus had no family. He lived a monastic life to lead people from darkness to light.