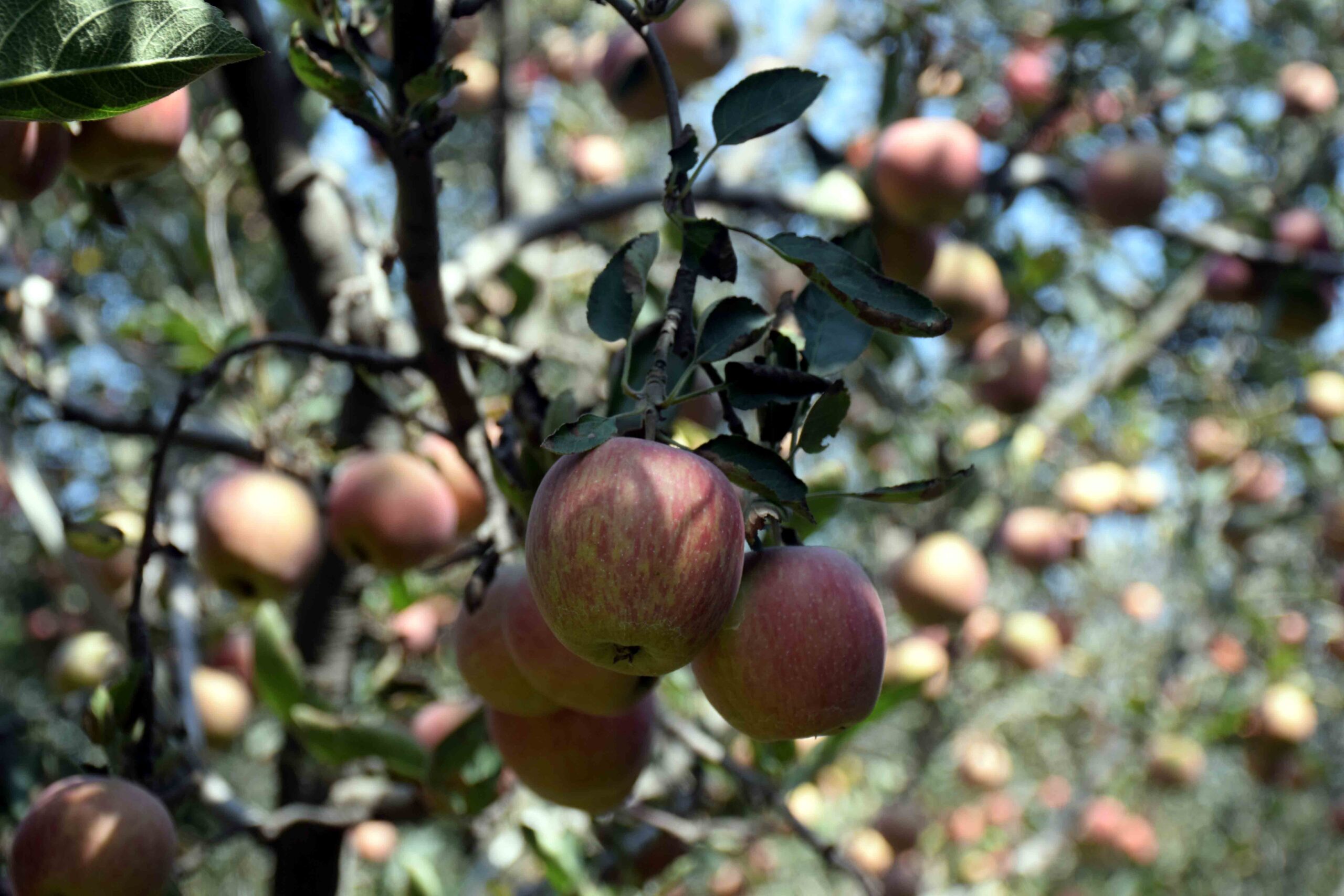 Despite a bumper crop, apple farmers are staring at an uncertain future. A host of factors have not only dwindled the returns for farmers but also dented the backbone of Kashmir’s rural economy.

Mohammad Yusuf, 62, a farmer, brought a small herd of sheep earlier this year and availed a loan from a local lender to build a concrete shed for them. Yusuf hoped to earn some profit by putting up the sheep for sale on the day of Eid-ul-Azha when even the frugal Muslims of Kashmir turned spendthrifts while purchasing sheep for sacrificial purposes.

A resident of Gund Shamas, a small village in central Kashmir’s Budgam district, Yusuf’s apple orchard located in the backyard of his rundown, the double-storied house was brimming with the promise of good returns. From the extra income from sheep, this poor farmer hoped to take good care of the medicinal needs of his ailing wife besides raising two jobless sons, both married, and their growing families.

Yusuf’s hopes were not misplaced. This year, unexpected rains at the peak of summer wiped off the acute precipitation deficit that the Kashmir Valley faced following an excessively hot spring. Unusual rain activity in the months of May, June, July, and August recharged the water bodies, some of which were running at historically low levels.

As the harvest season started to pick up, a number of factors came into play at once, which dealt a blow to Kashmir’s farmers and the horticulture industry, dashing the hopes of Yusuf and others like him who are contemplating to give up apple farming.

‘Unusual rain activity in summer recharged the water bodies, and it also brought cheer on the faces of apple farmers with the expectations of a bumper crop running high.’ Apple in Distress

“A box of ‘Kuloo’ apples, which I sold for Rs 700-800 last year, fetched only Rs 400-500 this year,” said Yusuf in an agitated tone, “The prices of fertilisers and pesticides increase year by year, but the apple sector is going from bad to worse. It will become difficult to continue if the situation doesn’t improve.”

According to officials, the summer rains had a positive impact on the horticulture sector. Thanks to favourable climatic conditions, Kashmir recorded a bumble apple crop this year, with annual apple harvest pegged at more than 21 million metric tonnes, against 17-19 million metric tonnes.

Yet, the bumper harvest couldn’t translate into good returns for poor farmers like Yusuf. While some farmers and traders have pushed the produce into cold storage units, poor men like Yusuf are not willing to take the risk.

“What if the rates don’t increase? Then I will have to pay the storage charges from my own pocket! I have to pay off the debt also. If I don’t, the interest will only pile up, which is why I sold the produce anyway.”

Yusuf is not the only Kashmiri farmer who is facing uncertain times and a perpetual sense of defeat. Hundreds of poor Kashmiri farmers, for whom the earnings from their orchards are the primary means of yearly sustenance, apple farming is turning into an unprofitable venture.

Bashir Ahmad Bashir, President of All Valley Fruit Growers and Dealers Association, said that the increase in the cost involved in harvesting, packaging, and transporting the apples to different markets across the country almost doubled in 2022 compared to last year. He said that a box of apples costs Rs 300 to Rs 500 for a farmer, which depends on the type of fertilisers, pesticides, and packaging boxes, besides the labour charges and freight.

“Due to a bumper crop, there was bulk availability of apples in the market, due to which the rate went down by 30 percent,” Bashir said, adding that the arrival of cheap Iranian apples in the market was also responsible for sharp reduction of rates of Kashmiri apples. “The government should impose a duty on imported apples to bring parity in rates,” he said.

A Sopore-based grower-cum-trader, who didn’t want to be identified, said that the mismanagement of traffic on the Srinagar-Jammu highway led to the bulk arrival of apples in markets across the country. Thousands of apple-laden trucks were stranded, sometimes for weeks, on the strategic and only all-weather road link which connects Kashmir with the rest of the country.

Cracking the whip, the Jammu and Kashmir administration removed the Senior Superintendent of Police (National Highway) from his duty, and J&K’s Chief Secretary, Dr. A K Mehta took charge of ensuring a smooth flow of apple-laden trucks on the highway. Mehta chaired a series of meetings during which the highway expansion works and the annual migration of nomads along with their livestock were identified as major factors for highway blockade.

“If the flow of vehicular traffic were managed properly on the highway by transporting all the livestock to Jammu given the expansion works, a steady stream of apples would have arrived in markets. But the bulk arrival caused a dip in demand, due to which the rates also fell. This will translate into losses for farmers,” said Ghulam Nabi, a grower from the Zinpanchal village of Budgam.

Given the uncertain market trends, apple farmers and traders are pleading with the government to build more cold storage units in Kashmir, “The non-local traders take advantage of the perishable nature of pears and apples to lower the rates. If there are more cold storage units in Kashmir, it will help both individual farmers and local traders to defeat the market impulses so that they can sell the fruits at the appropriate time,” said Nabi.

Asking the government to take a humanitarian view of the issue, Bashir said about five million people are directly or indirectly associated with the horticulture industry, the backbone of Kashmir’s rural economy, which is pegged at Rs 10,000 crore.

“The government should announce a waiver for poor farmers who have taken loans from banks. Some of them will fall into financial distress because they might not be able to pay off their loans this year due to poor returns,” he warned.