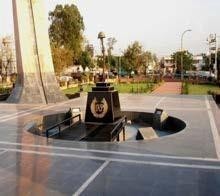 India observes October 21st each year as Police Commemoration Day to honor Police personnel who have laid down their lives in the line of duty. Across the country, Police forces hold a commemoration parade or present a Guard of Honor at Police Memorials. A state/CAPF-wise list of personnel who have given the supreme sacrifice in the line of duty during the year is read out, and a wreath-laying ceremony is held.

This observance was first held to commemorate the heroism of Police personnel killed in action against the PLA on October 1959 at Hot Springs, Ladakh, a remote border post on the Sino-Indian frontier. In the past 63 years, the blood of more than 35000 Police heroes has mingled with the soil in every corner of India- not just in Himalayan heights but in Metropolitan areas, remote hamlets, hot, deserts, tropical jungles and riverine terrain. Christian, Sikh, Muslim, and Hindu, the men and women in secular khaki have made the supreme sacrifice, combated militants, dreaded mafias, dangerous criminals, and violent mobs while protecting vulnerable personnel or premises. This is way beyond the call of duty demanded in any other profession

“Hot Springs” is not just a place but an epitaph of exemplary bravery displayed by the Indian Police and their supreme sacrifice while protecting the territorial integrity of the country under extreme geo-climatic conditions. On the fateful day of Oct. 21, 1959, 10 valiant Police personnel laid down their lives fighting at 16,000 ft altitude, in extremely cold conditions and against all odds, in unequal combat with heavily armed Chinese troops at Hot Springs in Ladakh.

On October 20, 1959, three reconnaissance parties were launched from Hot Springs in North Eastern Ladakh. This was in preparation for further movement of an Indian expedition which was on its way to Lanka La. While members of two parties returned to Hot Springs by the afternoon of that day, the third one comprising two Police Constables and a Porter, did not return. All available personnel were mobilized early the next morning in search of the missing personnel. This team was led by DSP / DCIO Shri Karam Singh. At about midday, Chinese Army personnel were seen on a hillock who opened fire and throwing grenades at the party led by Shri Karam Singh. Since there was no cover, most personnel were injured. Ten of our brave Police Personnel attained martyrdom, and seven others sustained injuries. The seven injured were taken prisoners by the Chinese. Bodies of the ten personnel were returned by the Chinese only on November 13, 1959, a full three weeks after the incident. These bodies were cremated with full Police honors at Hot Springs. The Annual Conference of Inspectors General of Police of States and Union Territories held in January 1960 decided that October 21 would henceforth be observed as “Commemoration Day” / “Martyr’s Day”. It was also decided to erect a memorial at Hot Springs and every year members of Police Forces from different parts of the country trek to Hot Springs to pay homage to those gallant martyrs.

Every year a pilgrimage tour of the all-India Police party with members representing various states and Central Police Forces to Hot Springs is undertaken. The objective is to pay homage to the ten valiant Police personnel who laid down

their lives while protecting the territorial integrity of our country. The incident is remembered and observed as Police Commemoration Day across the country.

A National Police Memorial at Chanakyapuri, New Delhi stands as a testimony of the sacrifices made by countless policemen in the performance of their duty. The Memorial gives police Forces a sense of national identity, pride, unity of purpose, common history and destiny. “The Wall of Valour” – 30 feet tall granite sculpture stands at the police memorial with the names of over 35000 martyrs who sacrificed their lives in the line of duty and reminds them of their valour and glory.

On the morning of October 21, 2018, Shri Narendra Modi Hon’ble Prime Minister of India, dedicated the National Police Memorial to the nation and also paid homage to more than 35000 Police Martyrs, who have since the dawn of Independence, made the supreme sacrifice while defending ordinary citizens from

anti-social elements and safeguarding the Unity and Integrity of the country from militants, extremists and terrorists of various hues.

HOW THE BRAVE HEARTS ARE HONOURED ON MARTYR’S DAY

The arms are reversed (Shok Shastra) and two minutes of silence is observed in honor of the departed souls. The names of police martyrs of states, police and paramilitary forces are read out, to acknowledge with pride the supreme sacrifices made by them. Three volleys of shots are fired as a mark of respect for the martyrs.

The history of J&K Police has been a saga of indomitable courage, unflinching devotion to duty and supreme sacrifice by its officers and men. JKP has always been at the forefront of the national struggle to defend the integrity

During turbulent times, onerous responsibilities have been put  on J&K Police. After independence, Pakistan was never tired of fomenting social unrest in Kashmir and made desperate efforts to wrest control of the state from India. In its futile bid for grabbing Kashmir, it launched two full-scale wars against India in 1965 and 1971 respectively. On both these occasions, the services of Jammu and Kashmir Police in tiding through turbulence and turmoil are remembered with honors and admiration. Many bold officers and jawans rendered selfless service to the people and society and even sacrificed their lives in keeping with the noble and valiant traditions of the Jammu and Kashmir Police.

The year 1989 may be taken as the annus mirabilis in the history of the evolution of the Jammu and Kashmir Police. Call it by whatever name you will, but terror in all its nakedness was launched by Pakistan which resorted “to bleed India white” by “thousands of cuts”. As a part of the geopolitical strategy, Pakistan started sending armed terrorists to Kashmir to subvert the democratic institutions of the state and to destabilize its government by killing prominent politicians, bureaucrats, and intellectuals. Taking full advantage of the vast chunk of unemployed youth and the rampant backwardness and illiteracy of the masses, the perpetrators of terror found the right kind of ground for whipping up communal passions of the people to promote and strengthen the feelings of secessionism and separatism. All political activities in the state came to a standstill. The entire Valley drowned in grief and despair and groaned under the onslaught of terror. Education of children got disrupted, business and trade got a severe jolt, tourism nose-dived, the safety and security of people became uncertain and, bridges and schools were set afire. In short, the entire fabric of civic life was disturbed. In these turbulent times, the state police took up the challenge to confront the enemy with courage, fortitude and resolve and jumped into the fray with all its might.

JKP salutes the memory of its gallant men with pride, those men who personified the will of the Force and sacrificed their lives while demonstrating an unquestioning dedication to duty, those men who fell beside their comrades in the fight against terror to preserve the sovereignty and territorial integrity of the country and those men who furthered the noble ideal of “service before self” at the cost of their lives. J&K Police is proud that these men of substance, without caring for their safety, security, convenience or comfort came forward to fight valiantly and vanished to yonder horizon where all of their kinds shine like stars,

beckoning their comrades to continue to tread in their footsteps so that good always triumphs over evil. The martyrs have conferred upon the entire organization a halo of invincibility, imperturbability, honor and dignity.

Director General Police (DGP) Jammu and Kashmir Shri Dilbag Singh said that “it is a wonderful initiative by the government which would serve as a morale booster for the forces fighting terrorism here. Through this initiative, the school children would learn about the supreme sacrifices of the martyrs. It would immortalize the brave hearts who sacrificed their lives while protecting the sovereignty and integrity of the Nation”. He further added that the initiative would give a special feeling to the family members of the martyrs and would act as an everlasting tribute to the martyrs.

Since 1990, at least 516 SPOs and 1088 personnel of different ranks have laid their lives in the line of duty. In recognition of the great services rendered by J&K police, the successive Governments at the Union /State level have recognized the Valour and supreme services of officers/Jawans of this celebrated and highly decorated police force. J&K Police ranks first in the country in the tally of Gallantry Medals bestowed upon it, the details of which are as follows: –

As we commemorate the 63rd year of the course-changing saga of supreme sacrifice at Hot Springs, we must remain proud of the fact that the nation adores its heroes who have made the supreme sacrifice. There is and will never be any dearth of courageous men and women in uniform.