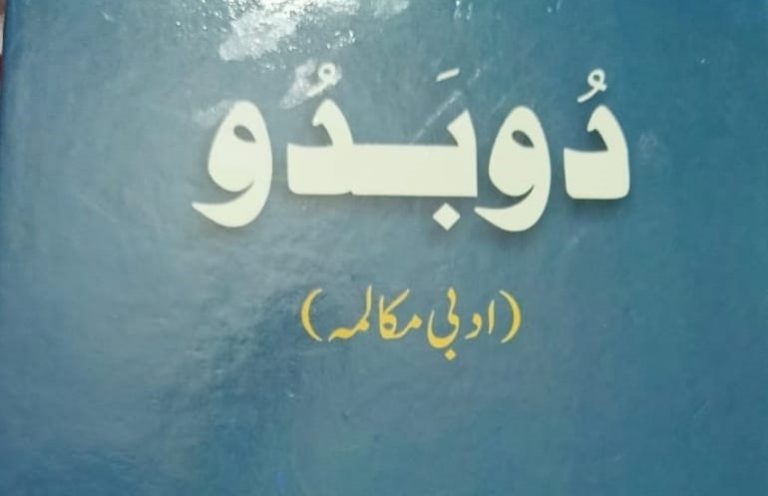 Mohammad Imam Anwar, pen name Anwar Afaqi was born on 7th August 1954, at Baliya Barol Darbangha. He has done B.Sc and diploma in automobile engineering. He has also done PG in Urdu from Moulana Azad Urdu university. Presently he is a retired engineering officer. He has several compilations to his credit. A few among these worth mentioning here are.

This book ” Du- Badu” comprises 176 pages and is divided into ten chapters. The contents of this compilation are based on the literary interviews of legendary literary figures of India. Interviews of two distinguished fiction writers of the valley Noor Shah and Wehshi Syed are also part of this well-known book. It is published by an educational publishing house in New Delhi.

About his intentions of authoring this book, Anwar Afaaqi says, ” During 1977, when I was in Kolkata in connection with some departmental training schedule, I got the precious opportunity to meet some prominent literary figures very closely. These personalities include Alqama Shibli, Nowshad Darbanghvi, Zafar Awganvi, Ahsan Darbanghvi, Salik Lukhnavi, Saqlain Lukhnavi, etc. One day Nowshad Darbanghvi informed me that a three days centenary seminar on Dr Iqbal’s life and works was being organised by the Muslim Institute under the chairmanship of Alama Shibli.

There was confusion concerning the date of birth of Alama Iqbal, but the Iqbaliyat experts of that time had unanimously fixed 1877 as the birth date of Alama Iqbal, the poet of the East. So the centenary literary event was going to be held in 1977. When I was reading my composed article in the seminar, I was shocked to see 1938 as the date of birth of Alama Iqbal from Dr Khaleel Zaman Nusrat’s authored book ” Bar Mahal Ashaar Aur Unke Makhaz” on page number 135. I thought that had someone met Dr Iqbal in his lifetime and asked him about his actual date of birth, such confusion among scholars would never have got a birth.

Later on, I became the victim of such confusion when a Facebook post of a legendary poet and prominent writer Ata Aabidi went through my sight. On 23rd June 2020, Ata Aabidi wrote an article about Owais Ahmad Doran. In the Facebook post, he mentioned that there is confusion about the date of birth of Doran Sahib. I decided to author a compilation based on the interviews of legendary literary figures from these two events. So, I interviewed some famous poets and writers to realise my dream of compiling the book. The common questions I posed to almost every personality are their date of birth, place of birth, and the domicile place or district”.

About the distinguished fiction writer of valley Noor Shah, Anwar Afaaqi writes, ” Noor Shah got his birth in Dalgate area of Srinagar city where from his popularity spread to distant lands including different corners of the globe. By composing more than 500 Urdu short stories( Afsane), 60 dramas, and a few novels, Noor Shah has ruled over the hearts of Urdu lovers. He is most popular among youth as well. So, ten compilations of Urdu short stories have seen the light of the day authored by Noor Shah. His compositions have been translated into Hindi, Gujrati, Punjabi, Dogri, and Kashmiri. So seven scholars have been awarded research degrees of M.Phil. and P.hd on his works. He has written many TV serials as well. His most famous books are ” Dard Ka Rishta,” “Gull aur Bulbul,” ” Jammu Kashmir ke afsana nigaar”, ” Kahan gaye ye loug,” and ” Aandi raat ka suraj”.

Born on 16th November 1946 in Srinagar city, a famous fiction writer of valley Wehshi Syed is the eldest among his three brothers. He has written more than 300 Urdu short stories, and many compilations comprising of short stories and novels authored by Wehshi Syed have been published so far. He is a well-known businessman and a good human being as well. Anwar Afaaqi met him on 20th November 2017 in Srinagar while participating in a seminar.

This book is a good treat for Urdu language and literature-loving persons. It can prove a good guide for those intending to author a publication based on literary interviews of literary figures. Among academic circles of the subcontinent, it has been widely acclaimed.