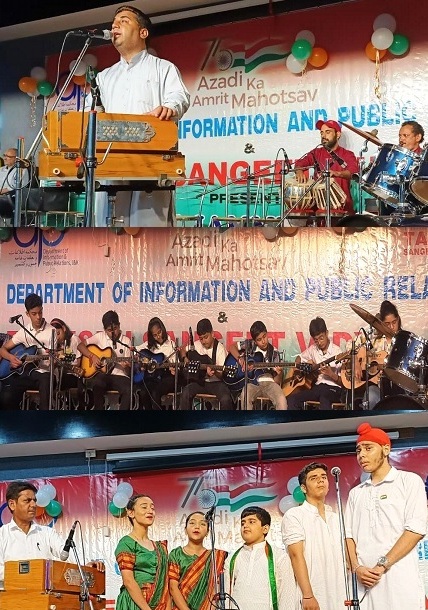 JAMMU, AUGUST 27: Directorate of Information and Public Relation (DIPR) today organized a mesmerizing event to mark celebration of Azadi Ka Amrit Mahotsav being observed across the nation as part of 75 years of independence.

The talented students of Tansen Sangeet Vidyalaya presented a bunch of cultural programs depicting their love, passion and respect for patriotism during the event held at DIPR auditorium.

Joint Director, DIPR Jammu, Sapna Kotwal was chief guest while Superintendent of Police Pawan Kumar Sharma was special guest on the occasion.  They enlightened the participants regarding the significance and objective of celebrating Azadi ka Amrit Mahotsav as envisioned by Prime Minister, Narendra Modi.

The cultural bonanza was combination of melodious songs and dance presentations by students of the institute and other kids as well. The artists of Cultural wing also presented cultural items on the occasion

Sapna Kotwal lauded the patriotic spirit and unique talent of participating students and encouraged them to further take part in such patriotic events to exhibit their love for the nation. She also emphasized upon them to learn from supreme sacrifices of India’s great freedom fighters and serve the nation. “It is our prime duty to support our security forces and pay tributes to those who have sacrifices their lives for the cause of our nation.

Pertinently, DIPR is organizing several events across every part of Jammu and Kashmir as part of Azadi ka Amrit Mahotsav.

Later, prizes were distributed among the top performers of the day.

Also, the Tansen Sangeet Vidalaya had organised several activities like flag march in collaboration with defence forces and song and dance competitions on patriotic themes during the month of August 2022.