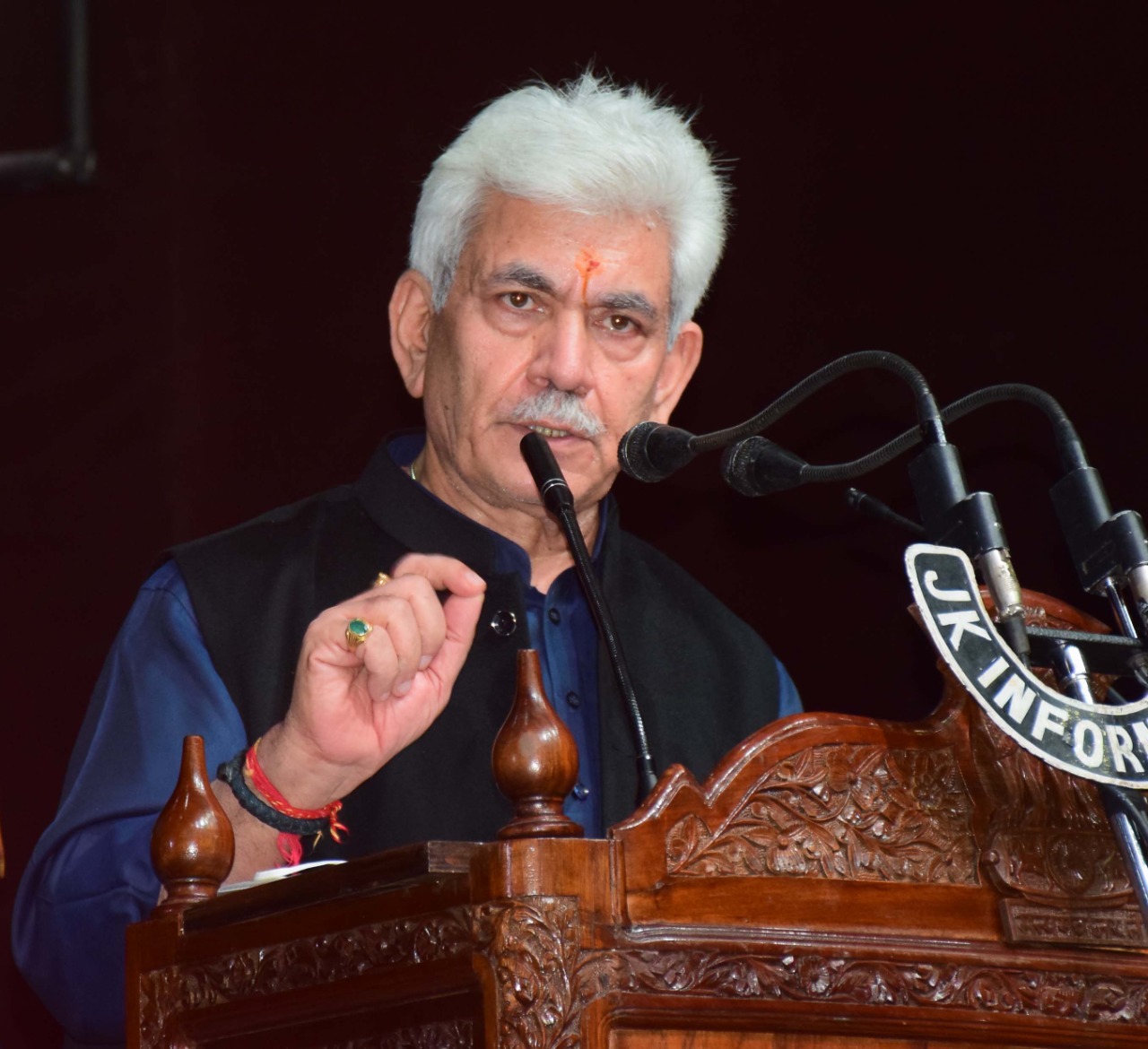 Jammu: Lt Governor announces Ex-gratia to NoKs of jawans from J&K. Lieutenant Governor, Manoj Sinha while interacting with the media persons today at Convention Centre made major announcements and shared the government’s vision on various developmental and administrative issues.

In a major decision, the Lt Governor announced Rs 25 lakh ex-gratia in favour of Next of Kins of Army Jawans from J&K martyred in UT or any other state.

The Lt Governor said that the Jawans of our security forces have laid down their lives while protecting the territorial integrity of the nation and this decision will end the discriminatory policy towards martyrs.

While speaking on the issue of withdrawal of posts referred to PSC/SSB before 31.10.2019, the Lt Governor said that only the posts where selections have not been made and results have not been declared were withdrawn.

In some cases, there are referred posts that have remained stuck since 2004. Now, recruitment rules, reservation laws have been changed.  Some posts were also transferred to the Union Territory of Ladakh. Hence withdrawal of these posts was essential to ensure transparent and merit-based recruitments.

He assured that these posts shall be put to fresh advertisement within two months for recruitment on a fast track basis.

The Lt Governor also announced one-time relaxation to the aspirants who had already applied for the withdrawn posts. This will ensure equal opportunity for all.

We have ensured free, fair, and merit-based selections in the recruitment process. The pending 3000 Class-IV posts will be filled within two months on a merit basis, he added.

The Lt Governor asked the aspirants to not get misled. We are sensitive to the concerns of our people, our youth. They can reach out to my office, or the office of any senior officers and their issues will be redressed on merit, the Lt Governor said.

Replying to a question of JDA’s action in Roopnagar area to remove encroachments, the Lt Governor said that the action has been taken as per the Rule of Law and as per the directions of Hon’ble High Court.

We are responsible for safeguarding the rights of rightful and legal allottees of any piece of land, but at the same time, the government also has a sympathetic view on those evicted and is considering every aspect for their settlement as well, he said.

The Lt Governor warned against miscreants who tried to give different colour to the anti-encroachment drive and reiterated the UT Government’s commitment to protecting the interests of the tribal communities.

The government is dedicatedly working for the welfare of tribal communities, which were neglected for the last seven decades. Implementation of the Forest Rights Act, individual and community rights certificates, Transit accommodations, scholarships to tribal students etc have brought a new dawn in their lives and we are making every effort to bring the tribal community into the mainstream. We are extending the best education and medical facilities, besides offering sustainable employment opportunities to the youth from tribal communities,” he said.

Rs 73 crore has been allocated for Cluster Tribal Model Village. The salary of seasonal teachers has been increased from Rs 4000 to Rs 10000. Further, 500 tribal youth have been selected for specialized skill development programmes and more such youth will be acquainted with the know-how of the skills required for the modern-day industries.

Moreover, 100 smart schools have already been initiated and 100 more will be dedicated to the students of the tribal community soon, he further added.

On the Government’s endeavours to promote industries and business sectors in the UT, the Lt Governor said that the global investors are eager to invest in J&K.

Since Independence, J&K had received a meagre Rs 14,000 cr investment, and now the New Industrial Development Scheme aims to bring more than Rs 70,000 cr worth investment in the UT, the Lt Governor said.

The Lt Governor observed that e- tendering and transparency have expedited the project implementation in the UT. Now, we are eyeing to complete around 45,000 projects in  2021-22 which is three times more than the ones completed in previous years.

Land Pass Book will be available in three languages- Hindi, Urdu and English so that people can easily get the required information. We have also changed the Land use policy to empower farmers.

180 Services have been made online which are also being connected with a feedback system.  We are also laying a mechanism to regularly assess the employees’ performance to ensure good governance, observed the Lt Governor.

Speaking on the tourism sector and other recent initiatives of the government, the Lt Governor said that the J&K UT has emerged as a leader in the tourism sector over the last two and a half years. Rural Homestays with the OYO group which were started recently at Pahalgam will help in building a tourist infrastructure of world standards in rural J&K.

The government of J&K has entered into an agreement of Cooperation with New Zealand G2G to improve farmers’ remuneration, transfer of technology in research & development as well as marketing & value addition of sheep products of J&K.

We have also launched the first of its kind QR Code based mechanism for certification & labelling of handmade carpets of J&K. New policies and decisions of the government will also take J&K’s Carpet export to Rs 1000cr in 3 years and it will cross Rs 2000 cr in 5 years from now.

For the sportspersons who bring laurels to the UT and for the budding sportspersons, we have rolled out the J&K Sports policy-2022 which focuses on creating world-class infrastructure, coaching, and varied opportunities for growth in sports. It also offers government jobs and cash rewards from Rs 10,000 upto Rs One crore for the exceptional achievements of the sportspersons, the Lt Governor further added.

The Lt Governor lauded doctors, health workers, paramedics, health department, District administration and the people of J&K for their efforts in the fight against the covid pandemic.

Appreciating the hard work and dedication of ASHA workers during the covid pandemic and vaccination drive, the Lt Governor announced Rs 1000 per month incentive for 3 months for all 12,789 ASHA workers.

Answering a query on the Delimitation process, the Lt Governor expressed his full faith in the Election Commission and said that the Commission will do the right thing.

The Lt Governor said we have succeeded in destroying the ecosystem of terrorism. Every citizen has to respect the Indian Constitution and National Flag.