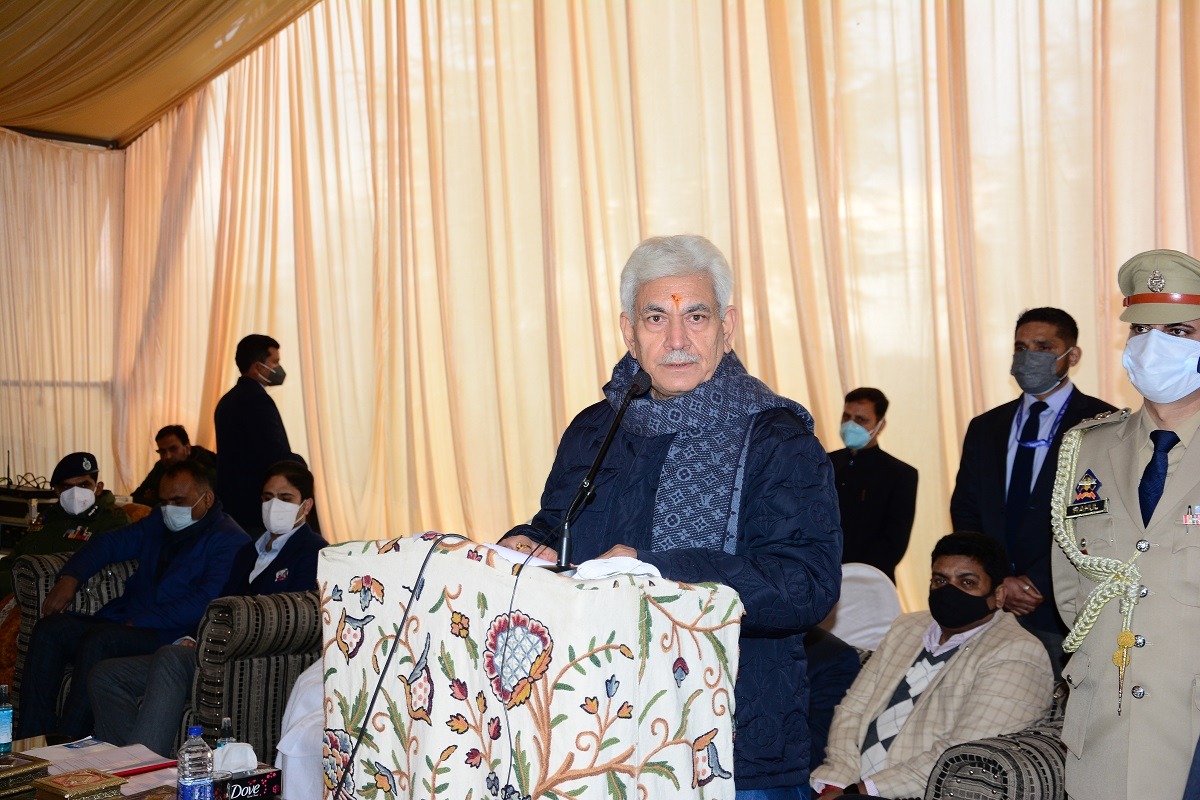 Lieutenant Governor: systematic effort to improve our cities in J&K UT has been long overdue

Dedicates several other projects to the citizens of Srinagar to strengthen city’s infrastructure, ensuring efficient services are delivered in a sustainable manner

Costing Rs 75 Crores, the riverfront project is being implemented by Jal Shakti Department under the Srinagar Smart City project.  The phase-1 is envisaged with modern public utilities and state-of-the-art green space.

The Lieutenant Governor also laid foundation stone for redevelopment of Polo View Road as pedestrian walkway at a cost of Rs 5.3 Crores to provide better ambience and shopping experience to the citizens.

The Lieutenant Governor said that a systematic effort to improve our cities in J&K UT has been long overdue.

We are working on this much-awaited transformation by improving urban services, creation of urban infrastructure and improved system of urban governance to make the cities ecologically sustainable, economically productive and socially equitable, added the Lt Governor.

“I believe through physical and economic regeneration of our cities & its infrastructure we can provide citizens an attractive environment to live & work and fulfill the needs of businesses”, the Lieutenant Governor observed.

It is equally important that residents should proactively participate in the urban rejuvenation programs to improve the quality of life, said the Lt Governor.

Smart City is a people’s movement to make the cities sustainable, efficient to provide improved services to the citizens. We need to come together and realize the dream of Smart City by working in cohesion, he further added.

Today we are facing many challenges due to rapid global change but they can be successfully tackled through better services, better planning, implementation and good governance. We are also making dedicated efforts to create an eco-system so that urban and rural economy would complement each other instead of being dependent on each other, said the Lt Governor.

Hon’ble Prime Minister Shri Narendra Modi had said that – “Every city has a unique culture and their development also takes place traditionally and it is necessary to save that cultural heritage while developing the cities”, observed the Lieutenant Governor.

We are developing our cities with the same spirit. We are keeping the spirit of cities alive and culture intact. We are making efforts to increase per capita income by providing opportunities to the people and improving the standard of living, said the Lt Governor.

The enlistment of Srinagar city in the UNESCO world creative cities network under the Craft & Folk Arts category is a proud moment for all. It is the collective responsibility of all the stakeholders associated with crafts and art to strengthen it and also revive the traditional handloom and handicrafts, added the Lt Governor.

The Lieutenant Governor appreciated the efforts of SMC and other districts of Kashmir division for continuous public services delivery during the harsh winter season.

Srinagar Municipal Corporation has introduced various technical interventions, working continuously on Good Governance for the convenience of the common citizens and improving the public service delivery. Development works initiated today will strengthen the core infrastructure of Srinagar, besides opening up new avenues for the tourism sector and extending facilities to the locals, the Lt Governor said.

Complementing SMC for the work done on graffiti and art in public places, the Lt Governor advised the Municipal Corporation to organize events like wall paintings in different areas to celebrate Azadi  ki Amrit Mahotsav.

Several other projects including Control Room of ‘Adaptive Traffic Control System (ATCS)’ costing Rs 12.76 crore; Vehicle Mounted Manhole Desilting Machine  and Snow clearance machines  have been dedicated to the citizens of Srinagar to strengthen city’s infrastructure and to ensure efficient services are delivered in a sustainable manner.

While speaking on the occasion, Chief Secretary, Dr. Arun Kumar Mehta said that the new projects will add new attractions to Srinagar and increase tourist flux to the city.

Sh. Junaid Azim Mattu, Mayor, Srinagar Municipal Corporation said that the massive Urban Transformation projects dedicated to the people by Hon’ble Lieutenant Governor will give impetus to the ease of living of locals here and increase their standard of living.

Adaptive Traffic Control System (ATCS) is being implemented under the AMRUT scheme within SMC limits. The scope of the project includes the establishment of a Control Room at SSP’s (Traffic) office and implementation of traffic lights at 33 junctions in Srinagar in Phase – I and 33 junctions in phase –II, it was informed.