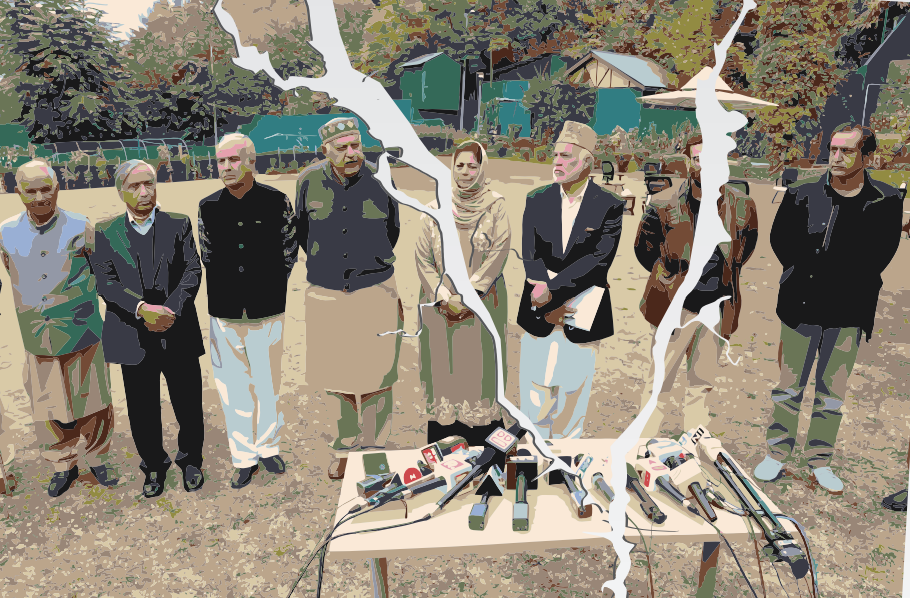 Rising political temperature has widened the fissures in Gupkar Alliance, a conglomerate of regional parties which had come together to fight for the restoration of Article 370. Will the alliance, survive if the assembly elections are held in J&K?

Even before the Election Commission of India comes out with the schedule for Jammu and Kashmir assembly elections, the fate of the Peoples Alliance for Gupkar Declaration (PAGD), a conglomerate of regional parties which is fighting for the restoration of J&K’s special status, remains uncertain.

In fact, the clouds of uncertainty are growing thicker with each passing day. Launching a scathing attack on Peoples Democratic Party president Mehbooba Mufti earlier this month, senior National Conference leader Sakina Itoo sought to blame the former J&K chief minister for landing Jammu and Kashmir in the “current mess.”

“It was the dream of the late Mufti Sayeed to sell Kashmir. Today, people of Kashmir have no rights, and we are not even able to stage a protest for fear of landing in jail. When Mehbooba was the chief minister, hundreds of innocent youth were killed, and pellets blinded even girls. People have not forgotten how she warned the youth to stay inside homes or face pellets and bullets,” the senior NC leader said during a rally in north Kashmir recently.

This is not the first time that a senior leader of National Conference, whose president Dr Abdullah heads the Gupkar Alliance, has targeted the PDP president, who is also the vice-president of the fledgling alliance that took roots after the constituent parties contested the District Development Council polls, which concluded on December 22 last year, under one banner – PAGD.

In one of the speeches during his recently concluded whirlwind tour of Jammu region, Omar Abdullah also blamed Mehbooba and her party for facilitating the BJP’s entry into Jammu and Kashmir while seeking to blame her for the prevailing political crisis in the union territory, which remained under the president’s rule for the third year.

“After the assembly elections of 2014, I extended a hand of friendship to Mufti Mohammad Sayeed. We warned him against allying with the BJP, and we knew it was going to prove extremely dangerous for the people of Kashmir,” said Omar in Chatroo village of Inderwal.

According to political observers, the remarks of Omar and Sakina, who is close to the National Conference president Dr Abdullah, reveal the mindset in the National Conference. More importantly, however, it has raised questions about the future of the Gupkar alliance, which has tried to project itself as the ideological and political contender of the BJP in Jammu and Kashmir.

During its maiden election, the alliance had managed to win at least 110 out of 280 District Development Council seats. Also, it dominated Kashmir results and some district constituencies in Chenab and Pir Panjal regions. However, the BJP had emerged as the single largest party with 75 seats, while National Conference came second with 65 seats and the PDP on third with 27 DDC seats.

THE FISSURED ALLIANCE: The remarks of Omar Abdullah and Sakina Itoo against Mehbooba Mufti reveal the mind-set in the National Conference, raising questions about the future of the Gupkar alliance.

But the DDC polls were marred by internal bickering with the constituent parties accusing the National Conference of grabbing the lion’s share of seats in the constituencies where the PAGD had put up their candidates. The crisis also forced Peoples Conference president Sajad Lone to exit the alliance.

Now, the fissures in the alliance seem to be deepening with NC leaders mounting a direct attack on the PDP and its president Mehbooba Mufti ahead of the assembly elections, which, according to reports, are likely to be held next year after the delimitation commission submits its report.

Speaking at a summit organised by a national TV network in New Delhi recently, Mehbooba Mufti, who has reportedly warned her party leaders against criticising leaders of the Gupkar Alliance, said that the question of contesting the upcoming assembly elections under the banner of the alliance would be addressed once the election dates are announced.

“We will think about it once the election dates are out,” she said, asserting that her party was going to contest the polls. The PDP president has in the past asserted that she would not contest any election unless Article 370, which granted special status to Jammu and Kashmir, was not restored.

THE FISSURED ALLIANCE: For Kashmir-based parties, contesting elections under one banner will help the BJP’s allies while they will eat into each other’s votes if they fight the polls separately.

Asked if the Gupkar Alliance was still intact, Omar Abdullah, the National Conference vice-president sought to dispel rumours that the constituent parties were pulling apart due to ideological differences, “The PAGD is still there. They met 10 days back. They are doing their job, but it is not like they will meet every day just to keep you happy. They are working at their own level,” he said in Baramulla.

The Gupkar alliance spokesperson and the Communist party leader, M Y Tarigami said the alliance has been working together on “key issues”, and the question of participation in assembly elections together will be decided after the poll schedule is announced. “Gupkar Alliance has a clear roadmap for resolving the prevailing political crisis in Jammu and Kashmir. Our unity is our strength,” he said.

Prof Noor A Baba, a political scientist and former Dean of Social Science at the University of Kashmir, said the Kashmir-based political parties should keep the “interest of people in mind” once the election dates are out. “Contesting elections under one banner will help the BJP’s allies in Kashmir while they will be eating into each other’s’ votes if they fight the elections separately. It is going to be a difficult choice,” said Prof Baba.

With the political landscape heating up in Kashmir, the coming days are going to be full of turbulence. Since the onset of autumn, political parties have been reaching out to people in a big way, with public rallies being organised across the length and breadth of the union territory. While political activities are expected to gather steam in the Valley before the arrival of the snow, the report of the delimitation commission, which has called a meeting with the National Conference later this month, is going to raise the temperatures even further.