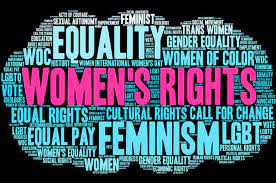 What makes human beings exceptional from animals appears to be pretty simple. One would possibly argue they have smarter brains, rational thinking, language and communication skills, cultural norms, the extraordinary discoveries beginning from the fireplace to fighter jets and so on. Today human beings have come progressed from hunter-gatherers to industrial revolution 4.0, digitalisation and Artificial Intelligence.

Despite making notable economic development and medical and technological advances, human society remains suffering from fighting many demanding situations at numerous levels. One of the most important tasks even inside the society is gender bias and the crimes against women. This is regardless of the truth that women were at the vanguard of human development and medical research. Women have been dealing with the task of inequality and exploitation given since historical times. It was with the sunrise of the 20th century whilst women all around the globe started to protest for their rights and equality.

In the west and Europe, they were considered secondary citizens. They have been enslaved, objectified, and had to fight for everything nearly: the right to vote, to property, to even opine, etc. The commercial revolution of the 1850s introduced many adjustments within the social setup. Before this duration, women had been restricted to houses and took up most effective conventional jobs. Over a time frame, the cost of living increased, and women had to earn too. Modernisation of the textile industry also played a crucial role in the entry of women into the workforce, But even then, there were wage disparities and discrimination.

In the west and Europe, they were considered secondary citizens. They have been enslaved, objectified, and had to fight for everything nearly: the right to vote, to property, to even opine, etc.

During the ancient and the middle ages, people believed that women were born to control the household chores and manage the children. As a religion of peace and justice, Islam stressed that men and women are moral equals in God’s sight and are expected to fulfil the same duties of worship, prayer, faith, almsgiving, fasting, and pilgrimage to Mecca. Islam tremendously improved the status of women compared to earlier Arab cultures, provisions for prohibiting female infanticide and recognising women’s full personhood. Islamic law emphasises the contractual nature of marriage, requiring that a dowry be paid to the woman rather than to her family. Women were also granted the right to live in the marital home and receive financial maintenance during marriage and a waiting period following death and divorce. Prophet Muhammad SAW’s last wife Ayeshah was a well-known authority in medicine and history. Some distinguished women converted to Islam before their husbands demonstrate Islam’s recognition of their capacity for independent action.

However, the most unfortunate part of the story lies in the injustice, exploitation, and violence that women are subjected to even today. Ironically, crimes against women are being committed in Muslim societies, which is a sheer violation of the Basic Islamic principle of justice and equality. It seems that domestic violence and crimes against women are being normalised and taken for granted. The recent video of a woman reportedly burnt alive by her husband and in-laws have come as a huge shock to the people with consciousness. Our Valley has seen many ups and downs, and there have been different kinds of situations people had to face, but we as a society have never seen such crimes being committed or accepted by the people. Unfortunately, there was not much hue and cry over this issue which was worrying. Let the people, especially the young lot, raise their voices and call for an end to the crimes against women. It is also imperative that women are encouraged to report the offences or the violations they have to face because, generally, the crimes against women are done within the four walls of society.

There are numerous domestic violence and dowry cases, and there are even more cases that are unreported and unknown to the law and society. Internet and social media can be a great tool to spread awareness and highlight the crimes and the perpetrators to ensure justice.

There are numerous domestic violence and dowry cases, and there are even more cases that are unreported and unknown to the law and society. Internet and social media can be a great tool to spread awareness and highlight the crimes and the perpetrators to ensure justice. Our women need to be made aware of their rights given to them by Quran and the Prophet Muhammad SAW. There are also stringent laws that prohibit domestic violence and attract penal provisions. To progress and prosper as a society, we need to realise the importance of treating our women with love and respect. A woman relentlessly toils, playing psychiatrist, doctor, maid, and confidant to the children. It is rightly said that behind every successful man, there is a woman, yes, a mother, a daughter, a friend, or perhaps a sister. Let us strive for justice and equality as good Muslims and responsible humans.

(The writer can be reached at [email protected])