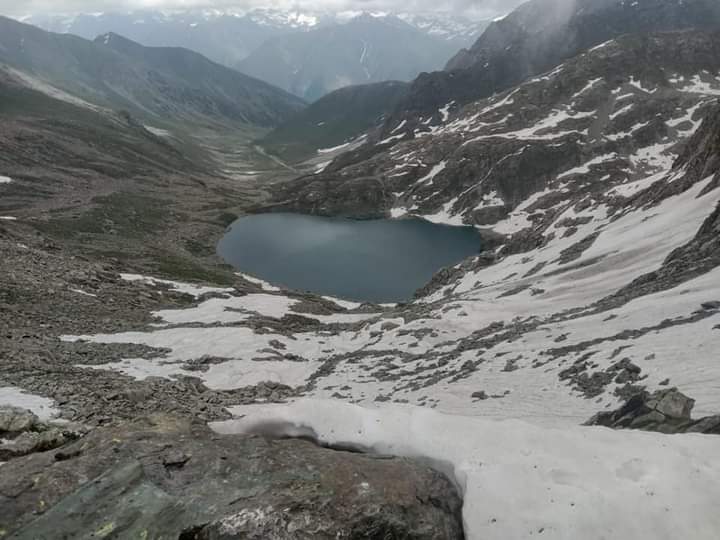 The everlasting beauty of Mouj Kashir (Kashmir) is hidden in the upper reaches of mountains at an elevation of 3000 to 4000 meters above mean sea level. At such altitude, one can find unparalleled pastures spread over several kilometres on which gipsies claim their rights. These meadowlands are encompassed by cliffs, wilderness and spectacular water bodies. Along with natural sounds produced by animals, rivers and wind movements, the whistles of shepherds bring life to these silent valleys. Furthermore, the soulful voice of nomadic children creates a stirs in the hearts of heedful listeners.

The narrow stretch of land between the twin tops of Sinthan and Margan forms a natural boundary between the Anantnag and Kashtiwar districts of J&K. On one side is the famous Kashmir valley, and on the other side of this range lies the obscure Warwan valley (Kashtiwar). Though reached by two different routes from Kashmir side, the least explored meadows and lakes of the place are situated very close to each other at an average altitude of 4000 m. There are 16 lakes in the whole area, and most of them are unfamiliar. Starting from the Sinthan Top, the trek to Margan top can be completed in three days only. And if proceeding further, one can reach up to Sheeshnag Lake (Pahalgam) in seven days. Therefore, one can complete the track from the Sinthan top to Pahalgam at a maximum of ten days.

Margan Top, also known as Death Valley, combines two words- Mar (death) and Gan (valley). In earlier times, this place claimed many lives due to unprecedented weather conditions and the rugged terrain of the area. It is situated at a distance of about 35 km from Kokernag. The Margan top is also called the gateway of Warwan valley. To the left of Margan Top, at a distance of three kilometres, one can visit all four lakes which are too close to one another, known as Choharnag (Chohar means four, Nag means spring). Hence all four lakes together are known as Choharnag Lakes. At a distance of few miles away from last Choharnag lake, there is another big lake almost equal to that of the biggest Choharnag lakes. Therefore in total, there are five lakes situated on the left side of Margan Top. All these lakes are high altitude oligotrophic lakes fed by glaciers. With different colours, the lakes present a splendid view. The reflection of mountains in the backdrop makes these lakes very charming, and the water from two of the Choharnag lakes drains into Marwa River, which is a right-bank tributary of Chenab River. The water from other parts of Margan Top flows into Gawran Nallah to form the Bringi River.

Four More Lakes on the Other Side of Margan Top

On the right side of the Margan Top, at a distance of five hours by foot, there are four more lakes, though smaller in size than Choharnag lakes but equal in splendour and magnificence. Out of four lakes, three of them are named Khilan Nag, Shilsar, and Ash Lake. Each lake is followed by beautiful meadows full of flowers. In the backdrop, white peaks add beauty to the green surface. The rocks of different colours and sizes enhance their beauty. With changing colours, the sky presents a fantastic look. The floating clouds of dark grey colour on deep blue sky catch the visitors eye.

It is a sum of numerous meadows studded with beautiful lakes and surrounded by several peaks. The rivers and streams flowing in these two valleys are full of fish. Hence trekkers must be equipped with fishing rods to make the trip memorable. These valleys look much beautiful in the early morning and at the time of sunset. The scattering reddish-orange colour of morning and evening sun fill hearts with warmth. Other than balmy rays of sun glinting off the snow, the rocky meadows look perfectly still. The sky decorated with twinkling stars and a bright moon brings dead souls back to life.

Between Aarshan Valley and Famber valley, there are seven lakes in total. These lakes are named Aarshan Lake, Zed Nag, Neh Nag, Daren Sar, Nil Nag, Nag Pathri Lake, and Nag Moj. The virgin valleys of Aarshan and Famber can be visited by following two well-known routes. One such trial starts from Rajparian Wildlife Sanctuary/ Sheep Breeding Farm (Daksum), which passes through Hoksar, one of the best camping sites of the expedition. The second route falls on the way to the Sinthan top. One should get down from the vehicle at the Aarshan curve, which lies in between Daksum and Sinthan top. This path is more convenient than the first one. After visiting the beautiful meadows of Aarshan valley, the visitors cross Kadihajan Mountain to reach Famber valley.

Tail Piece The beautiful journey to this pretty land starts from Anantnag and passes through two beautiful gardens of Achwal and Kokernag. While moving close to the destination, the journey becomes enthralling. The road that sometimes runs parallel to rivers, inside dense evergreen forests, takes us to the top of mountains with a gradual ascend. Sometimes the travellers inside their vehicles fell uneasy and fearful at sharp, steep and blind curves on mountain slopes. But the fear ends after having the first-ever glimpses of the beautiful meadows at the top.