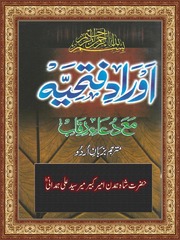 Hazrat Mir Syed Ali Hamadani (1314–1384) was a poet and a great Islamic scholar. He was born in Hamadan. Hamadan was then a great centre of Islamic knowledge. At a young age, Hazrat Mir Syed Ali Hamadani (RA) mastered all the available expertise in theology, philosophy, metaphysics and Sufism and travelled extensively seeking knowledge and practising spiritualism, till he became a scholar of repute, a mystic and a perfect saint.

He spent his life propagating Islam and undertook several extensive tours through challenging terrains and over hazardous routes and played a significant role in spreading Islam in Kashmir and influenced the Kashmir valley’s culture. He was known as Shah-e-Hamadan (King of Hamadan) and Amir-I- Kabir (the Great Commander).

Hazrat Amir-I-Kabir (RA) came to Kashmir three times, i.e. in 774 AH/1372 AD, 781 AH/ 1378 AD and 785 AH/ 1383 AD. The Muslims of Kashmir owe an outstanding debt of gratitude to this luminary of Islam for bringing them en-masse within the fold of Islam. He is lovingly known as the founder of Islam in Kashmir (“Baniay-Islam”).

Hazrat Amir Kabir Mir (RA) has authored many books and pamphlets in Arabic and Persian, which lay stress on recognising the unity of God and the worship of One God. His remembrance and reflection also full of sublime teachings and guidance on mystic experiences, and Aurad-I-Fatiha is one of these priceless compositions, concise primer, describing the unity and attributes of ALLAH (SWT) in a grand style.

The Awrad is an anthology of Quranic verses and the centrality of monotheism in Islam. A large part of the Awrad also consists of the prophet’s sayings, the names of Allah, and expressions of gratitude and Praise for Allah. It is a remarkable and precious gift of Mir Syed Ali Hamadani for Muslims in general and Kashmiri’s in particular. It can be considered a book of Tawheed.

Its every theme is the reflection of Tawheed proved by Quran and sunnah and a bright proof of Hamadani’s mission fundamentally based upon monotheism. If we are asked to say in a single word the theme of Awrad e Fatiha, unhesitatingly, we can say it is tawhid. The Tawheed described in Awrad e Fatiha is the manifestation of Islamic Tawheed simply and effectively so that the common masses of Kashmir would understand it and follow accordingly.

In the name of Allah, the Most Beneficent, the Most Merciful

I seek forgiveness from the great Allah.

Besides whom none is worthy for being worshipped, The Living, The Eternal. I turn to Him and seek repentance from Him.

O’ Allah! You are the author of Peace, and from You springs Peace, and towards you is Peace. Keep me, my Lord, in Peace and grant me entrance in the Abode of Peace. Glory to Thee my Lord and Exalted are Thou, The Lord of Majesty and Bounty.

From these opening lines of ‘Awrad e Fatiha,’ we come to observe that it is full of Allah’s Praise, an expression of gratitude for his innumerable bounties. These lines lay strong recommendations for seeking forgiveness from the Almighty for one’s sins. From Quranic teachings and authentic hadith, seeking forgiveness is repeatedly recommended for a believer. So in this context, Mir Syed Ali Hamadani too has emphasised attaining believer’s virtues. Praising Allah and expressing gratitude is not less than a sacred prayer for a pious Muslim. So Mir Syed Ali Hamadani’s Awrad e Fathia is the noblest wazifa to purify one’s soul.

There is no God but Allah. He is One. He has no partner. His is the kingdom. And all praises are due to Him. And He has power over all things.

There is no God excepting Allah the All-Powerful Sovereign the One the Most Supreme.

There is no God but Allah, the powerful the Forgiving.

The Kind the Sheeler.

The Great the High.

The Creator of night and day who is worshipped everywhere, whose mention is made in every language and who is known for all goodness.

Whom each day sees in every new glory.

There is no God but Allah. I say so with full faith in Allah.

I say so, seeking Protection from Allah.

There is no God but Allah, and no one has power and strength excepting Allah, and we worship none but Him.

There is no God but Allah, I confess in humility and servitude.

There is no God but Allah the Kind and the Friend who existed before everything. He will survive everything.

These sentences show how brilliantly Mir Syed Ali Hamadani has described Allah’s greatness and powers. Indeed, when a believer comes to know Allah’s powers and lordship, instead of seeking forgiveness and perfect solutions for his miseries from the gates of worldly lords, he straightaway communicates with the eternal Lord through the prayers. In this sense, we see that Mir Syed Ali Hamadani has awakened the believers and expected good deeds from them to succeed in both this world and hereafter.

From these pious words of wisdom compiled by Mir Syed Ali Hamadani in Awrad e Fatiha, we get to know about the duties and how we must be obedient to our Lord and express gratitude for his bounties.

Istighfar (Astagfirullah) is the gateway of relief and happiness. Whenever you are in distress, start reciting it and Insha Allah, it will take you out of your anxiety, put you in a peaceful situation, and give you happiness.

Gratitude is a crucial and significant aspect of the Islamic faith. In Awrad e Fatiha, we also find many Quranic verses seeking forgiveness from Almighty Allah and expressing gratitude or thankfulness to almighty Allah for his innumerable bounties. In this way, we see Mir Syed Ali Hamadani’s Awrad e Fatiha has intellectual, spiritual, and scientific utility. It is the noblest gift of Mir Syed Ali Hamadani for Kashmiri’s, which needs to be recited daily after dawn prayers as had been the routine for centuries.

We need to spread the meaning of this precious gift among the common masses so that the real message of it reaches the maximum. Besides being unaware of the basics of Islamic fundamentals, our young generation is also unfamiliar with our glorious past and our rich religious heritage. They need to get acquainted with the contribution of legendary saints like Mir Syed Ali Hamadani, who travelled distant lands and enlightened us. Muslim ummah in general and Kashmiris, in particular, are passing through difficult challenges presently.

The emergence of many sects and ideologies within a single religion is a major issue. Sticking firmly and acting according to the teachings of Awrad e Fatiha can only relieve us from the enormous mental burdens and challenges. Our madrasahs, irrespective of the different schools of thought they are affiliated with, need to make it an essential part of the syllabus because its message and teachings are relevant for all times and best suited. May almighty Allah shows us the right path of his friends, and may we understand the actual immortal teachings of Awrad e Fatiha for our best hereafter. Ameen.