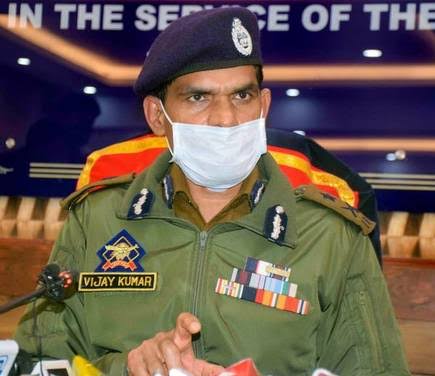 “After the two major incidents at Kushipora and Lawaypora this year in which two army soldiers and three CRPF men were killed, we had identified a module comprising Nadeem Abrar, Pakistani militant Muslim and Khushid Mir. Khurshid was killed in Sopore encounter and rifle snatched from CRPF was recovered him,” the IGP told the presser.

“A special team under the supervision of DIG Amit Kumar was constituted and was closing monitoring the module. Both Abrar and Pakistani militant Muslim had to carry out a huge attack at two places.

Yesterday morning when Abrar left from north Kashmir he was arrested by our joint special naka of police and CRPF,” he said, adding, ““He was put to joint interrogation by J&K Police, CRPF and Army. One Pistol and hand grenades were recovered from his possession,” he said, adding, “On sustained interrogation by the joint teams of JKP, CRPF and Army he disclosed that he had kept his AK-47 rifle in a house located at Maloora.”

Thereafter, the IGP said, he was taken to that house to recover the weapon after laying proper cordon of suspected house.

“When the party was entering the house to recover the alleged weapon, one of his associate, a Pakistani militant (about whom he didn’t disclose anything) was hiding inside the house and he fired on the party,” he said, adding, “In the initial fire fight, 3 CRPF personnel got injured and the Abrar accompanying the search party got hit.”

He said the injured personnel were evacuated and the rest of the party took position and called for reinforcement. “The cordon of target house was strengthened by component of JKP, CRPF & Army and the fire was further retaliated,” he said, adding, “In the ensuing gunfire foreign militant who fired from inside the house was killed and Abrar also got killed.” Two AK-47 rifles along with ammunitions were recovered from the site.

“This is biggest success for police because this module was time and again targeting this axis from Narbal to Hyderpora. He was involved in Weapon snatching. ”

Regarding Tral Awantipora incident involving killing of SPO, his wife and daughter, he said two militants involved in it have been identified.

“A Pakistani Jash militant and a local Jash militant are involved. We have identified them. We are after them, tracking them and very soon we will neutralize them,” he said as per GNS, adding, “From last few days, civilian or policeman have been killed and they are trying to create fear psychosis because they have fear that in coming times, lot of tourists will come.

There will be peace. Some positive talk is also going on and they want to disturb it also. They don’t want development and that people earn livelihood and that is why they target civilians.”

He also said that militants should not target policemen at their residence otherwise “we known how deal with it. I have 24 years of experience.” He said that local police men and officers cannot be kept in camps like security forces.

“They are locals and they will have to meet with the families,” he said, “module in Srinagar have pistols and will be soon neutralized.”

The IGP described drones attacks as serious technological threat and “we will respond through technology.

“Day before yesterday, we comprising police, army, CRPF, and others held a meeting (at Srinagar airport). This is serious threat, technological threat and we will respond through technology. We have made elaborate deployment because this (airport) is of strategic importance,” he said, adding, “Yesterday GOC sahib of 15 Corps chaired a meeting, we are going same regarding all vital installation and LC (LoC).” (GNS)