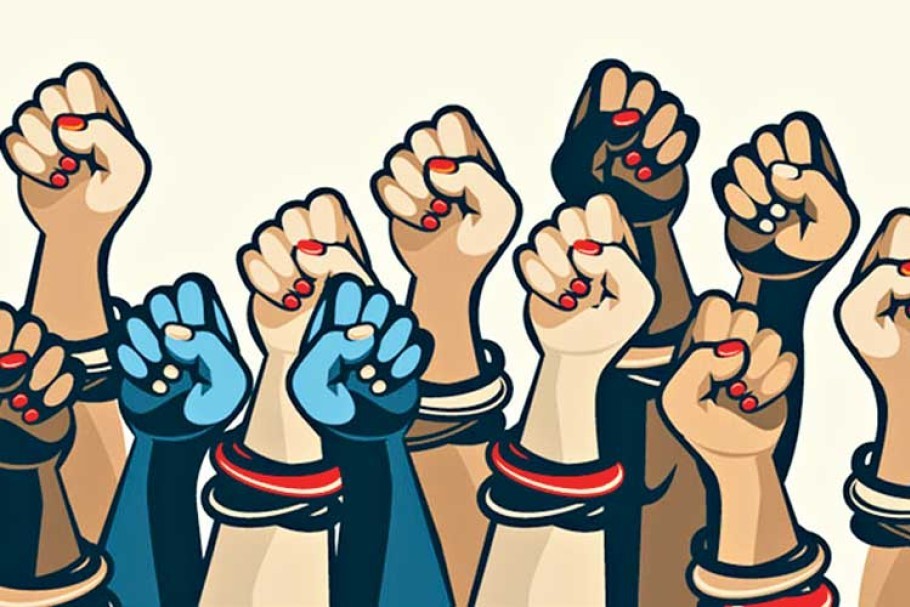 The menace of public harassment of women is a slap on the face of modern democracies, which are governed by the rule of law, writes Saima Tabasum.

On the prosperity trajectory, humankind traversed many stages in a rough and tough manner to master certain attributes. The fruits are visible in the track record of civilisations. They transcended from one of barbarism to the present, modern state with a lot of efforts in between. One couldn’t imagine the struggle that got us the current order of life, away from the years of tribalism and feudalism.

Slavery and the class system debarred the ongoing processes to sustain the momentum of progress in economic security for the entire humanity. One such issue which got sloppy treatment from a section of people is women empowerment. The concepts of gender empowerment seem to have attained their rightful spot in today’s environment. But how far the truth touches its base is hidden deep in the mystery of “women empowerment”.

Women are being given the opportunity at par with men to bring parity. Be it legislative, executive, or judicial, they share their numerical majority, though in small numbers.

Why women empowerment? The answer here is to empower the powerless women. Let me elaborate on the women’s share in the development of humanity and subsequent bias in the share of benefits; right from the inception of modern attributes in humanity, the predominance of males developed in sync with human development trajectory.

The analytical approach starts afresh from what we call the “industrial revolution,” which changed the thinking in every aspect of humanity. For it, the sage remains either compete or perish, which heavily acted upon women. They were seen as “pieces of enjoyment,” which hindered their progress. This attitude barred the vital section of our society from attaining education and thus rendered them economically insecure, which of course, paved the way for their dependency on males.

Thanks to ethical standards of religions, which prioritise the motherhood of women and debts humanity to their yore, the mindset has changed a lot. Religions accord a prestigious position of high stature to women.

As scientific modernism progressed, success was monitored through the prism of economic advantage. Herein lies the problem. To rely on excessive materialistic standards diverts the attention from the prime concern of prosperity in the economic dimension without discriminating between right and wrong. Gradually, the mindset changed due to various initiatives to bring parity between genders in matters of distribution of social goods at large.

Ours is a case of different matter, as we derive respect from religious sanctions. Be it Islam or Hinduism, and women are accorded the place of prominence. But the social development in contemporary fashion progressed contrary to its mandate. There are two specifics to gauge women’s empowerment to its real end. The difference in the nature of genders and the difference in social preference.

The cognitive bias of menfolk raises the demand for women’s empowerment. There are two ideological views on this front – either the dominant section had a penchant for dominance, or the efforts of women aren’t up to mark. Whatever the case, one thing is clear that the bias in distribution of social goods and services later spread its wings to politico-economic spheres. The marked difference remains in the societies of the time to reassure the vulnerable section of its rights. On the second level of debate, the highest legitimate authority is held by the government of the day. Like others, the debate in India remained at its place, and efforts were directed to rectify the bias to bring parity.

The constitution of the country includes ample provisions to better a lot of women to their advantage. With the rule of law and equality in place, our country applauds their contribution to socio-economic development and works on multidimensional fronts to improve their lot.

For the better, we are a changing society with a changed mindset now. Women are being given the opportunity at par with men to bring parity. Be it legislative, executive or judicial, they share their numerical majority, though in small number. More or less, the success story is better with some bleak spots. On the one hand, we have global icons like Kalpana Chawla, Mary Kom, Indra Nooyi, Sushma Swaraj, Arundhati Roy, Mithali Raj, Indira Gandhi, and on the other, there are black dots in the form of rising incidences of rape, dowry deaths, women trafficking, harassment at public places and abortion of girl child to mention a few. The government has remained committed to its task, but there is a scope for empowerment on much more reliable fronts.

To cite an example, the bill granting reservation to women in the parliament makes no headway because of the lack of seriousness among menfolk. The programmes such as Beti Bachao Beti Padao in the present form with dovetailing approaches like Ladli Beti scheme, promotion of SHG’s, reservation in local self-government, etc are part of our strategy towards women empowerment.

But why not half of the reservation in local self-government for women to ensure parity and equality? Why not the right to property for a girl child to curb dowry death as there is an apparent sanction in religious laws as well? Why not half reservation in case of employment opportunities to shed the bias in education for women at the social level? The policy reforms aren’t being asked as a charity, but it is the rightful claim of women to ensure equality.

Of course, the government is busy enhancing its standing on the legal front, but the government is just a representative of public opinion, barring some exceptions. Hence, the real change should begin from the society itself.

The issue of public harassment is a slap on the face of modern democracies, which are governed by the rule of law. Societal abuses like “Chaupadi” ( a ritual of some tribals who held the belief that women having menstrual cycle is impure, therefore should be removed to far off places from family till completion of the period) sends shivers down one’s spine. These and other gender-biased abuses should be shunned by society itself on the spirit of motherhood of women. Otherwise, legal initiatives mean to send coals to New Castle, which serves no purpose other than publicity.

I would like to conclude with the hope of realising the dream of women’s empowerment. For me, the mystery is empowerment. The reality is women. They don’t need doles and handouts of economic security but complete integration as an essential part of our society.

Saima Tabasum hails from Ganderbal, Central Kashmir. She can be reached at [email protected]