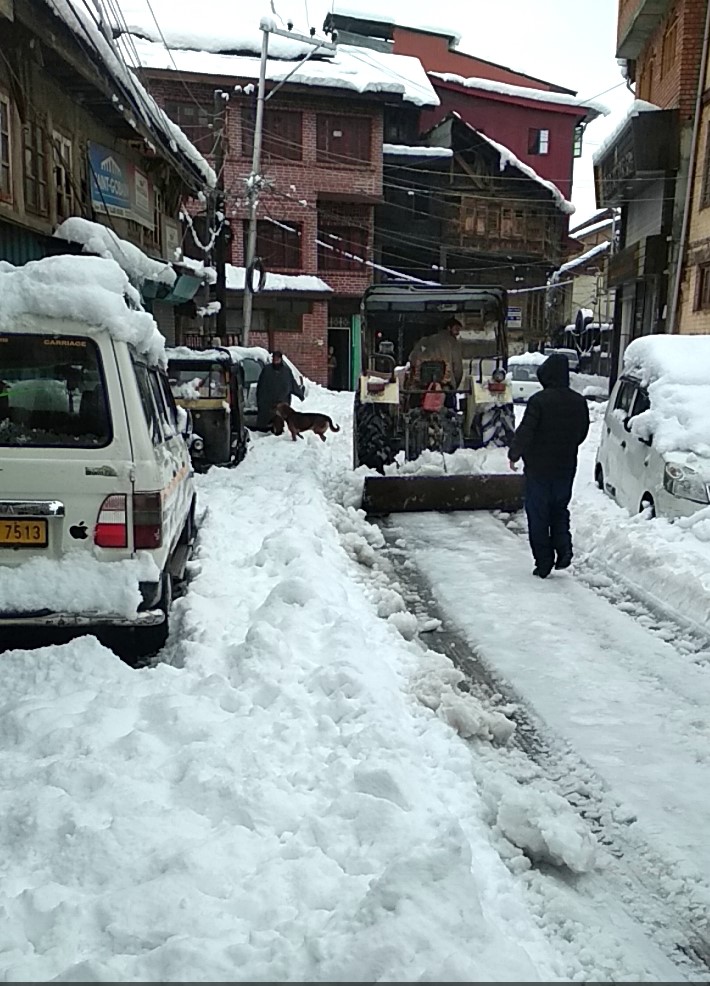 It has snowed heavily in Kashmir. In just a few days, the whole stretches of plains of Kashmir valley and the surrounding Zabarwan Mountains were draped under thick layers of snow. While a boon for few tourists who have dared to visit Kashmir valley in these pandemic times, the heavy snowfall has literally halted life in all parts of Kashmir valley. For many days, there was virtually no electricity, running water or properly functioning heating system not just in far-flung areas of Kashmir valley but even in the capital Srinagar.

So, why is it that Kashmir valley has been literally brought to its knees by increasingly erratic climatic changes which bring heavy snowfall during winter and unusual flooding during summer?

To begin with, everyone knows that Kashmir is a conflict-ridden region where the past three decades of political instability and violence has badly affected the running, maintenance, upgrading or modernization of civic infrastructure; be it roads, electricity or portable drinking water.

It is not only the internet services that have become victim of violence and instability but increasingly the climatic changes are also causing catastrophic devastations in Kashmir valley, crippling normal day to day life.

But is the violence and political instability solely to be blamed for Kashmir’s surrender to climatic changes or is there more than what meets the eyes?

It is really unfortunate that even in 2021, Kashmir valley and its residents continue to grapple with a creaking, broken down and archaic civil infrastructure, which is simply unable to deal with erratic climatic changes. Why is it that life, economy and leisure activities don’t come to a halt in heavy snowfall affected regions of Europe and North America or, closer home, even in the neighbouring Ladakh, Himachal Pradesh and Uttarakhand?

I think the answer lies somewhat in a cumulative result of various factors that have rendered Kashmir valley in worse position than other mountainous or snow receiving regions both within India and outside. It is true that past three decades of violence and political instability has resulted in weak deliverance of civic amenities by the answerable political class and unanswerable babus. The violence and political instability have resulted in delays, enhanced corruption and non-answerability with regards to the execution of not just the major infrastructure projects like roads, bridges and flyover but even the deliverance of basic amenities like water and power.

Kashmir valley unfortunately has been also the victim of the apathy of local Kashmiri population towards good civic practices and their total disregard for the fragile Himalayan ecology of Kashmir valley. The illegal felling of forests for timber, encroachments of wetlands for building residential colonies, construction of houses on fertile horticultural and agricultural land, illegal mining of river sand and stones – the list is long wherein the people of Kashmir have collectively contributed in creating ideal conditions for environmental catastrophes of the modern times to take place.  The damage caused by devastating summer floods of 2014 was a clear result of the Kashmiri peoples’ disregard for the need of the wetlands for the network of rivers and lakes of Kashmir valley to function smoothy, when unfortunately, Kashmir has seen a cataclysmic scale encroachment of wetlands and river beds for building of residential colonies. The entire nook and corner of Kashmir valley is littered with a huge garbage pile of bio non-degradable plastic and polythene waste, which have also choked many fresh water rivers, lakes and streams of Kashmir valley. And what is worst is that there is hardly any culture of local environmental activism, which can act as a viable pressure group on local administration.

Few years back, Srinagar found its place as the 10th most polluted city in the world and perhaps the only alpine and snow receiving urban agglomeration to acquire this dubious distinction. At a time when even Leh, Shimla and Darjeeling seem to have been doing better than Kashmir valley with a far more functioning and responsive civic administration and even more responsible citizenry, Kashmir valley finds itself as a victim of violence, political instability, corrupt and inefficient delivery of civic amenities by the local administration, and the callous, rogue and undisciplined behaviour of local Kashmiri population – all of which have together come to render our valley much more vulnerable to changing climatic changes than other parts of the world.

Look at the neighbouring Ladakh where the onset of winter leads to shift to winter tourism activities and the birth of such innovative local initiatives like creating artificial glaciers. This, despite the fact that Ladakh practically remains cutoff from the mainland during the entire stretch of harsh Himalayan winter. Kashmir valley, on the other hand (except for few winter tourist spots like Gulmarg), practically comes to a standstill due to both the non-existence of the civic infrastructure as well as collective lethargy of the local Kashmiri population, which literally goes into hibernation during the entire winter period.

And whatever little hope of economic functioning that remains during summer months often becomes the causality of violence and political instability. The result of all this is that human habituated areas of Kashmir valley are nothing more than a mess of unplanned and chaotic residential colonies built on environmentally fragile lands, littered with a mountain of plastic waste strewn all around in a dysfunctional and inefficient governance system. The tragedy is that regions with fewer natural resources have done far better than Kashmir valley, whereas Kashmir, despite having such a bounty of natural endowment, remains an example of neglect and misery. We cannot just blame violence, political instability, corruption of the official and political class for our mess but we as a Kashmiri society are also contributors in the continuing degradation and lowering of living conditions in Kashmir valley. Unless we bring a total change in our collective civic behaviour and encourage a culture of environmental activism, we can neither put pressure on the political class nor force the administration to them to deliver the results. It’s high time that the people of Kashmir bring that change before it is too late.

Views expressed are the authors own. He can be reached at [email protected]