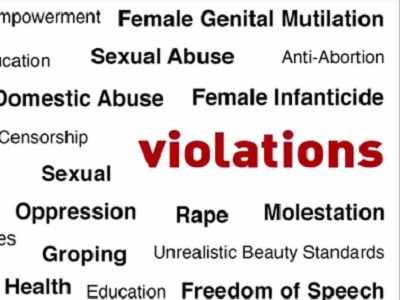 Women abuse has been increasing at an alarming rate in the Valley. Even though most people refuse to acknowledge the prevalence of domestic abuse in Kashmir, recent reports and studies prove otherwise. Most women don’t speak about it as they believe (or are made to believe) that it is in their destiny or, in Kashmiri language, they call it ‘Taqdeer’ to be at the receiving end, and that they have to “live with it”. A vast majority of women are unwilling to file a grievance or a complaint of this nature with the authorities due to the ‘disgrace’ that they believe will befall them and their families. Most of them are scared of the accusatory fingers and daily hassles that are inherent to the process of seeking judicial redress. Even those who are willing to adopt the legal path don’t see the light at the end of the tunnel. For example, more than 2800 cases were filed in one year at the Women’s Police Station in Srinagar’s Ram Bagh. But more than half of these cases were withdrawn due to family pressure or some sort of settlement between the parties.

Kashmir’s prominent psychiatrist, Mushtaq Margoob said women in Kashmir suffer from psychiatric problems due to domestic violence. “It is the insecurity and lack of confidence among women because of abuse that, at times, leads to suicide attempts,” he said.

In recent years, many women lost their lives owing to domestic abuse. There are many instances that reveal the horrors faced by women at the hands of their husbands or in-laws.

To cite a few, Maroofa Begum from south Kashmir’s Pulwama district was admitted in SMHS hospital after she was allegedly set ablaze by her in-laws. She finally succumbed on May 15 after fighting for her life for several days, said the police.

Another woman from Shopian died in the same hospital after she had set herself ablaze to escape abuse at the hands of her husband. A mother of four children was allegedly beaten to death by her husband and in-laws in north Kashmir’s Uri.

Perpetrators who are physically violent toward their intimate partners are often sexually abusive as well. Victims who are both physically and sexually abused are more likely to be injured or killed than victims who experience one form of abuse, as per experts. Abusers assault people of all genders, races, ages, social classes and ethnicities.

In order to avoid such abuse, women need to take steps.

“We need to empower women by providing them with fair representation across different decision-making levels of the government structure to better protect women’s interests and to achieve quality governance.”

The act also provides for free legal aid to the victims if they can satisfy the court that they have become victims of domestic abuse or violence.

At the larger level, the need of the hour is for society to come together and speak up against such abuses. Not only women, but people of all genders also need to take a stand against domestic violence and sexual abuse by demanding lawmakers update rape laws. The definition of rape must include marital rape also rather than considering it a different crime.

Also, the policymakers should work with local educational institutions and religious youth groups to create awareness about healthy sexuality and healthy relationships.

It’s about time that everyone learns to treat women with respect and dignity. The government at the centre and at the state level can do this by reserving more seats for females in legislatures who may better understand the problems of women and protect women by passing comprehensive laws that protect women from abuse and help victims in the path of recovery.

We need to empower women by providing them with fair representation across different decision-making levels of the government structure. This will better protect their interests and achieve quality governance. We can make a change by protecting the rights of women by making them active participants in the economic, social, political, cultural and other areas.

The author is a law intern. She can be reached at [email protected]