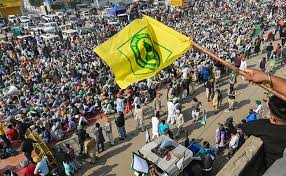 Farmers of India have felt exploited for long. The reforms that the Centre brought in, apparently to make the agriculture sector more efficient and lucrative in the form of three ordinances in June, have had the effect of upsetting large sections of them further. Parliament passed them into Acts in September. More than 500 farmers’ unions are now on a path of agitation. Thousands of farmers from the neighbouring States, stopped by the police on their way to Delhi, are camping at several points around the National Capital. They have refused to move to a designated site, a condition set by the Centre for talks.

The Centre has aggravated its original mistake of rushing through these laws without wide consultation and political consensus by taking a condescending attitude towards critics. Prime Minister Narendra Modi said on Sunday that farmers stood to benefit from the new measures, and this may well be true. The trouble is that most farmers are not convinced by the assurances and fear that their precarity will increase as a result of the changes. Farmer leaders have pointed out that the Centre has refused to address their specific concerns regarding the new laws, which they are concerned will render them helpless in the face of exploitative market forces.

At the heart of the fears are the potential end of the MSP and guaranteed government procurement of the produce. The new legal architecture allows farmers more choices in selling their produce, in theory, and creates a national market for their produce. The end of a monopoly market could theoretically lead to more efficiency, but procurement at MSP has been the backbone of India’s food security edifice. With unprecedented turnout and unanticipated vigour, the farmers’ agitation across the three borders in the Capital has already been hailed as the largest protest in recent memory. At the forefront has been the largely agrarian State of Punjab, with residents from all 22 districts marking their attendance, braving the Delhi city’s chilly and polluted air. The Modi government hastened these laws through without heed to the opposition, which is outnumbered in Parliament. And this is where the farmers’ protest assumes significance.

The farmers’ protests remind governments why they cannot skip the critical step of building consensus in policymaking. Agriculture as in the Constitution of both states and the Centre. So, even if one state has a problem, there is no single policy that Did not have opposition. Even the amendments to criminal laws undergo multiple iterations before they are passed in Parliament. Today, the damage is to public property, money flowing from taxpayers, and a loss of face to the government. When a consensus is achieved at the end of this ongoing turmoil, we have to remember it could have been avoided right at the start through debate and discussion at the table instead of riots and rallies on roads. Policies that concern agriculture and farmers cannot be framed while sitting in rooms in Delhi, without any contact with farmers and knowledge about the routine hardships they undergo throughout the year. The Centre is violating the rules in attempting to hand over the agriculture sector to capitalist cronies.

Now, the farmers’ protest has entered day 15; agitating farmers on Thursday threatened to intensify protest by blocking railway tracks. Addressing a press conference, farmer leader Boota Singh at Singhu border said, “We will block railway tracks if our demands are not met. We will decide on the date and announce it soon.” The point is that now international politics are trying to meddle in internal matters of the country.

“The UK Foreign Office is closely following the protests by farmers in India,” a government spokesperson said on Thursday as it clarified that Prime Minister Boris Johnson had “clearly misheard” a question in Parliament when he responded with Britain’s stance on the India-Pakistan dispute instead. The gaffe occurred during the weekly Prime Minister’s Questions (PMQs) session in the House of Commons on Wednesday when Johnson reiterated that any dispute between India and Pakistan was for the two countries to settle bilaterally in response to a question by Opposition Labour MP Tanmanjeet Singh Dhesi about conveying British Sikh “anxieties” over the ongoing protests against agricultural reforms in India. A UK government spokesperson said: “The Prime Minister clearly misheard the question in Parliament. The Foreign Office is following the issue of protests in India closely”.

Amid the harsh winter and the spike of COVID 19 cases, deaths, and fever and cold complaints, families of several protesting farmers have joined these protest rallies at the Tikri border. To date, at least seven people taking part in the farmers’ protest have died — four of them in an accident and the others of natural causes such as cardiac arrest. Families of elderly farmers are now joining them from Punjab and Haryana, and some have set up camps to help protesters with food and beds. A farmer does not always make a profit with every year’s production. It is usually one bumper production year. All these make the current farm laws suspect because, in contract farming, prices are fixed prior, and the produce is bought only if quality conditions are met. Else it is sent to the free market where it can go any way. The government needs to think of a policy that helps in improving quality and production for small farmers. The idea of farmer producer companies as a government undertaking headed by agriculture graduates is do-able. Contract farming should be allowed only with these FPCs.

Writer Shahid Majeed Mir can be reached at [email protected]