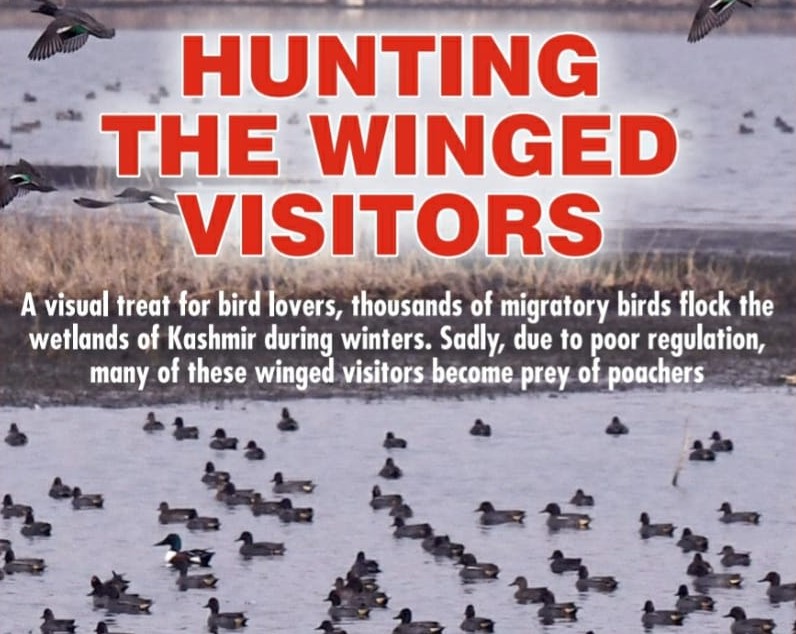 A visual treat for bird lovers, thousands of migratory birds flock the wetlands of Kashmir during winters. Sadly, due to outdated laws and poor regulation, many of these winged visitors become prey of poachers, Jehangir Ali reports.

Come winters and thousands of migratory birds descend on the wetlands of Kashmir to escape the harsh winter cold up north. With rich biodiversity, these wetlands become their home for the next few months till the time the winter paves way for the spring. The migration of birds usually begins in the month of November and it can last till March or even April when the last of the birds fly away to their real homes.

However, while the process of migration is triggered by the survival instinct of the birds who are in flight to escape the biting cold in the northern hemisphere, they become victims of a different enemy once they land in Kashmir – hunters and poachers.

In a recent incident, two of the four rare Whooper Swans, whose species had visited Kashmir after nearly a century, were gunned down by unknown persons near a wetland in December, prompting the Jammu and Kashmir government to order a probe.

The fatalities were acknowledged by the administration of the newly created union territory after a photo of the two slain birds, killed by unknown persons at Hygam wetland in north Kashmir, circulated on social media.

The reluctance to adopt the new environment policy of Jammu and Kashmir that lays down a framework for wetlands’ protection has encouraged poachers and also impeded measures for their conservation and restoration.

The image prompted uproar in Kashmir against the ‘murder’ of the birds on the wetlands which are under the direct control of the government. A J&K wildlife department official said a three-member committee has been formed to probe the circumstances under which the two birds were killed.

“A range officer is heading the committee. The photo has been uploaded by people who saw the two birds on the ground and not by the poacher(s) themselves. This has made difficult the process of identifying the perpetrators,” Rashid Yahya Naqash, Chief Wildlife Warden Kashmir, said.

A wildlife department official said the committee members have visited the area where the birds were shot down, “We have spoken with locals and collected some evidence. Since it is an unprotected wetland, such incidents will likely recur in coming days,” the official said.

In the migratory pattern of birds, Kashmir has a strategic location. It falls on the Central Asian flyway zone. Thrust into flight by the harsher winters of Siberia, China and Japan among other countries, lakhs of migratory birds visit the shores of over more than 5000 natural and manmade wetlands in the Himalayan region.

Under the 1971 Ramsar Convention, an international treaty for the conservation and sustainable use of wetlands, three wetlands in Kashmir – Hokersar, Wular and Surinsar-Mansar, have been categorised as projects of international importance. Experts say these wetlands offer a rich biodiversity for the visitors.

At one point, more than a million birds are reported to have visited Kashmir’s wetlands in one season.

“The Whooper Swans were sighted in Kashmir after nearly a century,” said a wildlife department official.

In January last year, a new species called Bar Headed Geese was spotted at a wetland near the famed saffron town of Pampore, on the outskirts of Srinagar.

The Wildlife Department carries out a bird census exercise on these wetlands with the help of the stakeholders, sometimes even involving students, during the peak of the migration process to determine the numbers of visitors.

“Unfortunately these birds often become prey of poachers due to a number of reasons,” Naqash said, adding that the wildlife department is understaffed to monitor activities at all the wetlands of Kashmir.

“We don’t have enough human resource to keep a watch on the wetlands,” he said.

As early spring starts giving way to the summer, Naqash said the birds, who stay in Kashmir for around five months of winter, depart to their native regions.

Poaching on the rise

Suhail Ahmad, 18, is not a stranger to the heavy sound of pellet and other shot guns coming to life around the Hokersar wetland on the Srinagar outskirts. He has grown up hearing these sounds.

“You can hear these shots with greater frequency during the onset of winters when the migratory birds are found in abundance. Everyone knows these are poachers at work,” Suhail, a student and resident of the adjoining Mirgund village, said.

Poachers don’t earn as much by selling the hunted birds which are sold in black market for anywhere between Rs 500 to Rs 4000, depending on the quality of the hunted bird and its weight.

The trade attracts money when the rich and the influential get involved who often kill birds for sport. According to sources in the wildlife department, the two Whooper Swans killed last week in Hygam were left behind by the poachers for the same reason.

The process of hunting the birds is simple. “The birds are lured to food items. Then the poachers lay traps around the area, making it difficult for the birds to flee once they are done with food,” a resident of HMT area adjoining Hokersar, who didn’t want to be named, said.

According to sources in the wildlife department, between 10,000 to 20,000 birds who visit Kashmir’s wetlands during winters are killed annually by poachers.

“These birds are sold by poachers in the markets of Kashmir, especially in Bandipora, Baramulla and Ganderbal. Many people are fond of consuming these birds as they believe their meat has many curative benefits,” sources said.

The political turmoil in Kashmir has also taken a toll on the rich biodiversity of the region. Experts believe that rapid urbanisation, deforestation and siltation have significantly shrank the area of land covered by wetlands in Kashmir. According to one study, 50 percent water bodies in Srinagar have vanished over a century. Hokersar alone shrunk from 13.75 square km in 1945 to 7.62 km in 2016.

As part of its efforts to stop this environmental degradation, 12 wetlands from Jammu and Kashmir among 130 across the country were identified by the central government for priority restoration in the next five years.

“Due to the environmental factors, there has been a sharp decline even in the diversity of bird species visiting these wetlands,” an official at the Sher-e-Kashmir University of Agriculture Sciences and Technology’s Wildlife Division, said.

He said the government’s refusal to adopt the new Environment Policy for Jammu and Kashmir, which has laid down an extensive framework for the protection of wetlands, has become an impediment for restoration and conservation of all the wetlands of Kashmir.

“Much of the poaching takes places only in wetlands in Kashmir which are not protected. Unless a regulatory framework comes into play and enough staff is available, poachers will continue to take advantage of these lapses,” another wildlife official said.

“Strict laws against poaching can become an effective deterrent to keep the poachers away from these wetlands. The government needs to put its feet down and show the determination for effective action against the poachers,” the wildlife official added.