Home » Calligraphy: A Source of Gratification 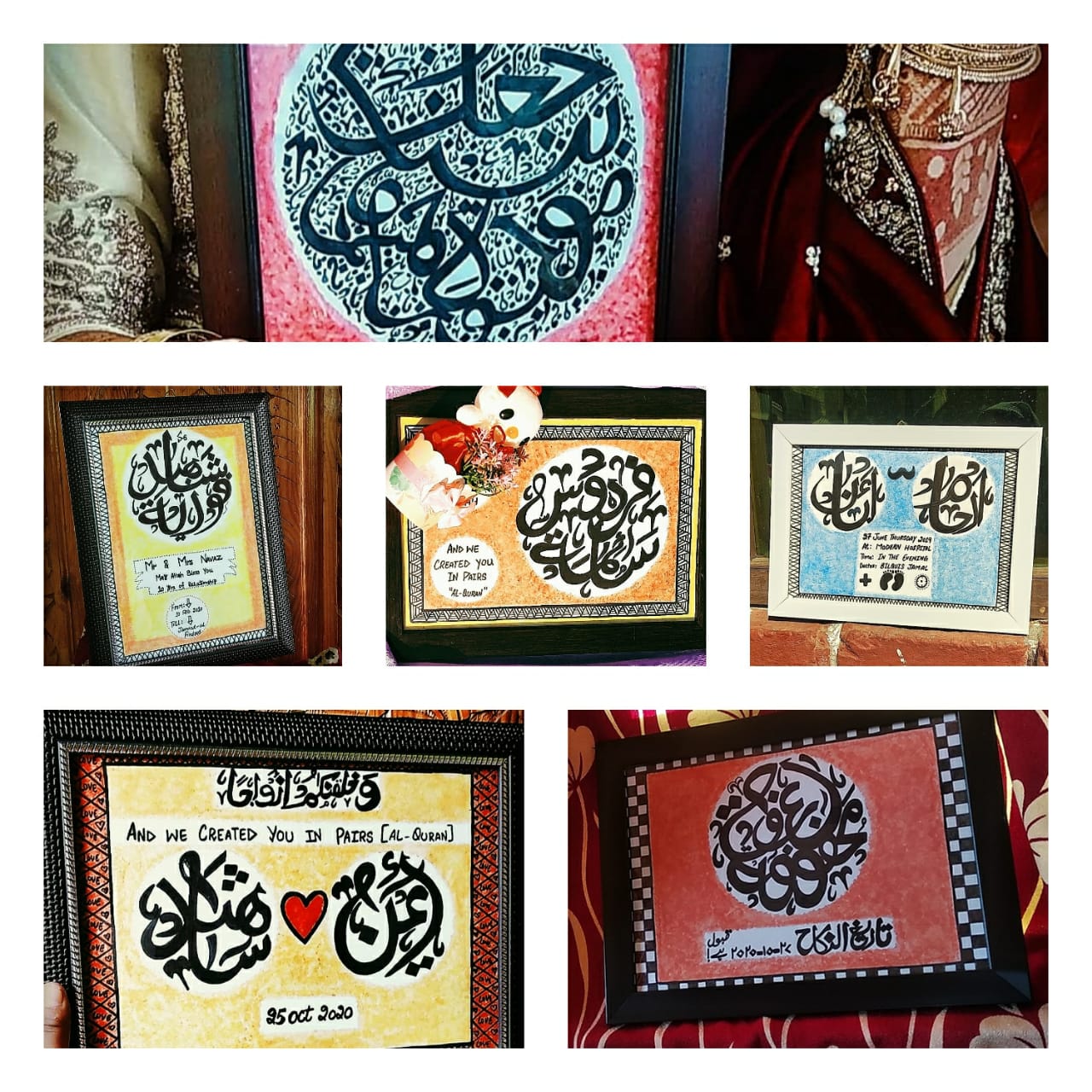 It is a fact that influential personalities are often unknown to the world. Same is the case with Aabida Rashid from Zainakote in Srinagar. She is a calligrapher of high repute. She has an innate tendency towards art. Moreover, the present pandemic has made her groom up the art and focus minutely on it. She has a flat-tipped pen in her hand with thick and thin lines. As we are aware that some things are inexpressible, for this sake, art is the best expression. Growing in an orthodox locality, where some professions are cherished while many are destined to dustbins, she has revolted against the status quo and has come out with something new.

Her journey has been full of struggle like others. Since her school days, she has been doing calligraphy and painting. She has participated in many local competitions and has won laurels. After completing her secondary school education, she opted for medical science. It meant a very less time for art. But she still continued to keep her passion going. In this way, she didn’t let studies suffer. Eventually, her hard work is providing fruit. Now, slowly and steadily, people have begun to appreciate her work. I was also influenced by her art. However, the most disturbing thing is that the majority of people are not in favour of these things. They believe that these things are useless. According to them, getting a decent job is important than these things. This line of thinking is also disturbing for those who want to make a career in this field. In Jammu and Kashmir, this craft or art is invisible, although a hobby for many. But for Aabida, it is more than a hobby. She is of the opinion that Calligraphy is music to eyes.

Furthermore, she says that it is a remedy for all moods in her life. She doesn’t feel alone in the shadow of this art. Apart from this, she is a self-taught artist. She has never been to any institution. As said, having an innate tendency towards this art, she has been working hard to get proficiency. Every day, she learns new things. In the pandemic, when there was laziness all around, she began to devote most of her time towards this craft. Going to school means that she had very less time to devote to this. However, pandemic came as both boon and bane. For her, it somehow has proved the icing on the cake because now, people are appreciating her art on social media sites like Facebook, WhatsApp and Instagram. Moreover, she believes that an artist should be given an opportunity to prove his or her mettle. Everybody is a genius. However, keeping the same criterion for everyone is insanity.

Her journey has been full of struggle like others. Since her school days, she has been doing calligraphy and painting. She has participated in many local competitions and has won laurels. After completing her secondary school education, she opted for medical science. It meant a very less time for art. But she still continued to keep her passion going.

Calligraphy is worldwide appreciated art. In this way, she expects that society should appreciate this kind of talent. It must not be abhorred. If this gives me pleasure I feel it as a duty, I must be allowed to do it. There is nothing special about hobbies and professions. Art or profession should give pleasure. Hence, it becomes worship. So, it is a happy moment for all of us to have an emerging calligrapher among us. It is up to us to know that she must be supported in this endeavour. She has a keen desire for this. And most importantly, she is revolting against the society that is used to a particular line of thinking. She wants the audience both to appreciate as well as prune her art. She loves doing what she does. She has been receiving orders for a month.

If God forbid, she is not taken into account, there are chances that we may deliberately oversight such a talent that can act as a medicine in times of mental frustration like in the present situation when the majority of adolescents are in depression.