Home » The Deepening Challenge in Pakistan 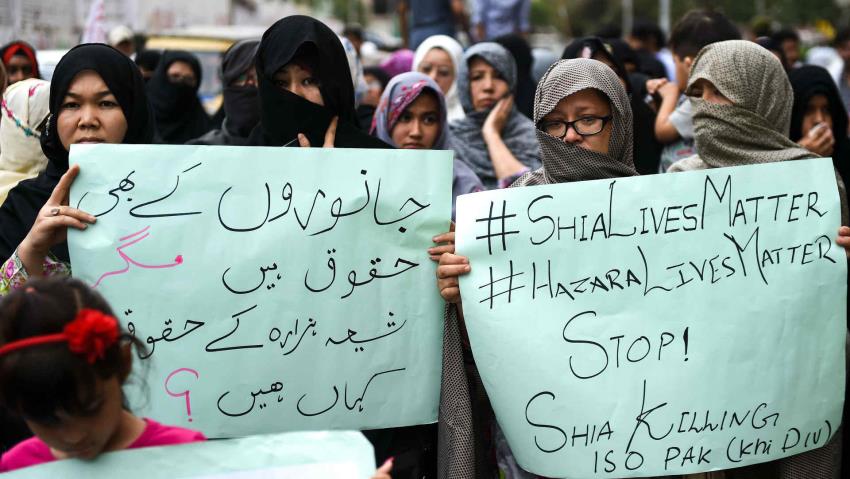 In 2015, Fatima Bhutto, niece of former Pakistani Prime Minister Benazir Bhutto wrote that in a predominantly Muslim country (Pakistan), it is no longer Hindus or Christians who face the largest threat of violence from orthodox and radicalized groups but Shias. Her prophetic words became once again true when recently a large crowd of the members of Pakistan’s so-called “banned” extremist religious organizations like Sipah-e-Sahiba marched on the streets of Karachi, the financial capital of Pakistan, chanting anti-Shia slogans and calling for death to Pakistan’s estimated 1.8 crores Shia people that comprises about 5-7% of Pakistan’s total population and 15-20% of the Pakistani Muslim population.

The immediate provocation for the threatening march was the disparaging comments made by a so-called “religious scholar” of Shia sect at a recent Moharram gathering in Pakistan’s capital Islamabad. He is said to have made objectionable comments against Hazrat Abu Bakr (RA), companion of Prophet Muhammad (PBUH).

Angered by this, the Sunni religious extremist organizations of Pakistan like Lashkar-e-Jhangvi and Sipah-e-Sahiba took upon themselves to declare the entire Shia community as “infidels” and call for their extermination. It is ironical that Shia community to which Pakistan’s founding father Muhammad Ali Jinnah also belonged is today facing a near an existential crisis in a country that was imagined for South Asia’s Muslims of all sects. It is yet another thing that ended up dividing South Asian Muslims among three countries – India, Pakistan and Bangladesh. But the greater question arises as to how did things go so wrong and so fast for Pakistani’s Shia population, which is one of the largest Shia communities outside the Islamic Republic of Iran?

It is, however, Shias of Pakistan who have had to face the worst kind of violence, especially in the last four decades that has created a deep sense of insecurity among Pakistan’s large and varied Shia population that not only includes South Asian Shias from Pakistan’s Punjab and Sindh provinces, it also includes Pakistan’s Central Asian Shia communities like Hazara Shias of Quetta and Gilgit and Balti Shias of Gilgit-Baltistan.

The answer to the question lies in the changing geopolitical realities that took place outside Pakistan but which eventually led to the “Islamization” of Pakistani Muslim society and rise of Sunni religious hegemonic extremism that not only threatened non-Muslims of Pakistan but also other sectarian Muslim minorities like Shias, Ismailis and most controversially Ahmadiyas.

This rapid rise of religious extremism has also hit Pakistani moderate, liberal and secular urban Sunni Muslims very hard along with Pakistan’s huge rural Sunni Muslim population that adheres to Sufism – a mystical branch of Islam considered heretic by puritan and extremist forces. It is, however, Shias of Pakistan who have had to face the worst kind of violence, especially in the last four decades that has created a deep sense of insecurity among Pakistan’s large and varied Shia population that not only includes South Asian Shias from Pakistan’s Punjab and Sindh provinces, it also includes Pakistan’s Central Asian Shia communities like Hazara Shias of Quetta and Gilgit and Balti Shias of Gilgit-Baltistan. Most scholars and political analysts are near-unanimous that despite the centuries-old sectarian feud between Shia and Sunni communities, both lived peacefully and amicably in what is now Pakistan. But two international events that took place in the neighbourhood of Pakistan changed everything for the worst.

The Soviet invasion of Afghanistan and the Islamic Revolution in Iran resulted in the empowerment of Sunni religious radical forces in Pakistan as well as the emergence of Saudi–Iranian political rivalry for the leadership of global Muslim community that eventually seeped into Pakistan and sowed the seeds of violent sectarian discord that was to lead to the death of an estimated 50,000 to 70,000 Shia Muslim men, women and children in both large scale massacres as well as individual target killings across all regions of Pakistan over the last four decades.

Shias of Pakistan were more South Asian culturally till the Iranian revolution of the 1970s that saw the dethronement of the modern and secular regime of the Shah of Iran and coming to power of the clergy under Ayatollah Khamenei. This has had a remarkable cultural impact on Shias of South Asia including those living in Pakistan as they increasingly started looking to Iran for religious guidance. The Soviet Invasion of Afghanistan in the parallelled to the empowerment of General Zia-ul-Haq, who ran a puritan Islamic agenda that changed the very fabric of Pakistani society and led it towards being an intolerant, regressive, sectarian and non-secular society that we see in Pakistan today. Things started to get violent for Shias of Pakistan during the reign of President Zia-ul-Haq, who indirectly supported attacks on Shias as part of his “Islamization” project.

Shias living in Pakistani cities increasingly became the victim of target killings and the worst ever anti-Shia pogrom took place in Gilgit-Baltistan in the early 1980s in which radical tribal elements from neighbouring Pashtun territories (with the tacit support of General Zia’s regime) massacred an estimated 800–1,000 Shias in Gilgit part of Gilgit-Baltistan, which is incidentally also a part of the former princely state of Jammu and Kashmir. Since then and especially after 9/11 attacks and removal of the Taliban from Afghanistan and coming back of these Taliban fighters in Pakistani cities, which added to the ranks of an already polarized Pakistani society, Shias began to be killed in large numbers everywhere in Pakistan, while on a religious pilgrimage to Iran or during Ashura processions, where suicide bombings have become a regular feature, Shias of Pakistan find themselves increasingly targeted in a systematic manner by extremist forces to deliberately instil fear amongst them.

In cities like Karachi, a large number of Shia doctors and professionals were specifically targeted that led to the exodus of nearly 500 Shia doctors from Pakistan in the last decade. Quetta’s Hazara Shia community, which is easily identifiable due to their Central Asian looks have been especially hit hard as an estimated 5,000 Hazara Shias have become victims of sectarian violence in last decade.

Shias of Pakistan are numerically too large to be suppressed completely but they are finding themselves increasingly being marginalized and become victims of targeted violence and Pakistan’s notorious blasphemy laws. And with Pakistan’s civilian state as well as so-called “deep state” both continuing to patronize these religious radical extremist forces for political and strategic reasons, the future of Shias of Pakistan looks inevitably bleak.

(The author +can be reached at [email protected].)