Home » Dr Qazi Rahmat: The man who inspired many 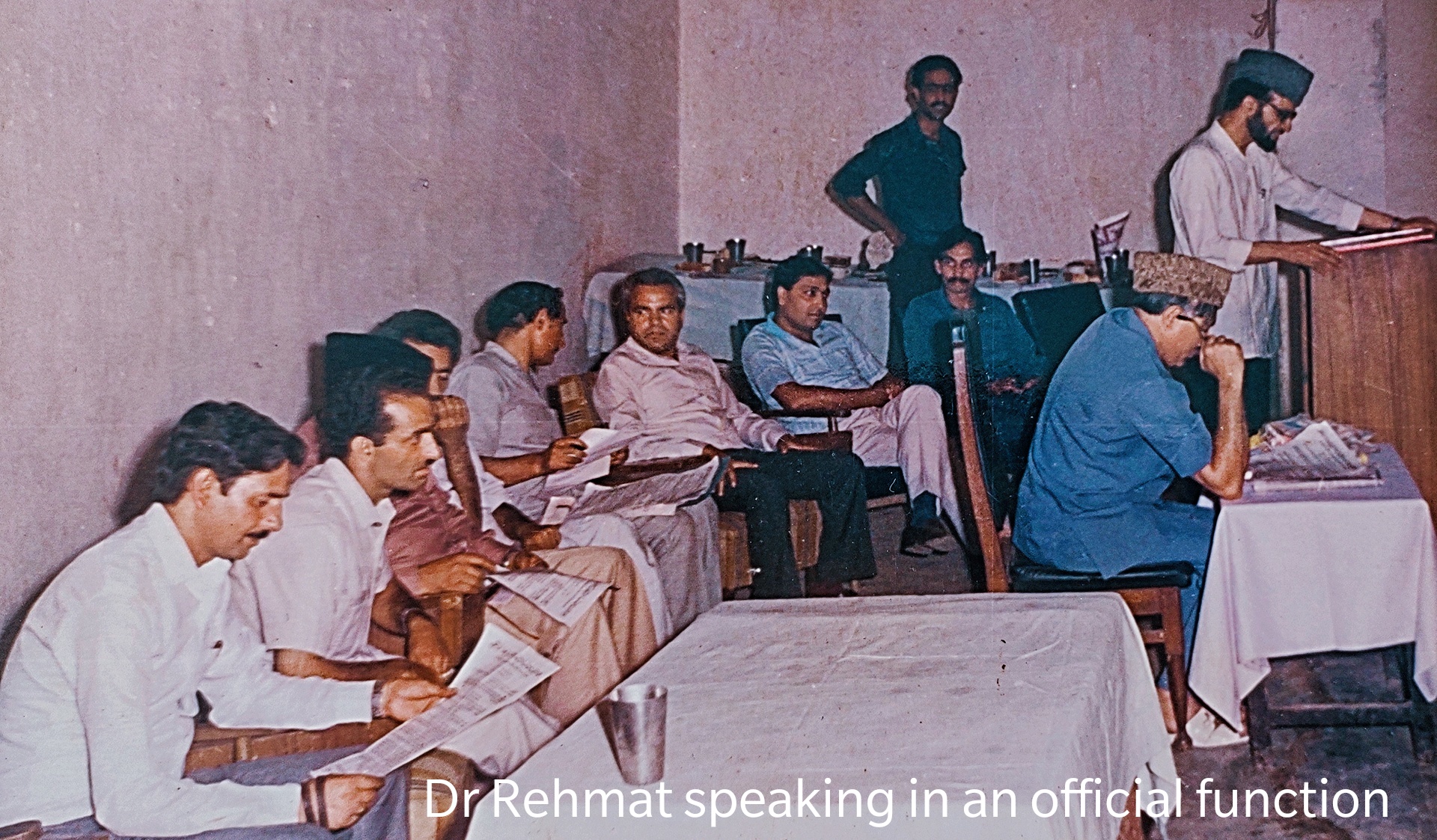 Dr Qazi Rahmat, son of an unsung hero of Kashmir struggle, Qazi Abdul Gani was simply a multidimensional personality. He was a religious scholar, a socio-political activist, a doctor, a poet, and an orator.  Born in a politically conscious and economically prosperous family on 21 May 1940, Dr Rehmat got two basic traits – to speak against injustice come what may and to live a royal life in any circumstance. And these traits shaped his personality.

It is often said that cleanliness is next to godliness. Dr Rehmat would always keep himself profoundly clean. His robust style of speech is known to all. He would prove his point with Quranic verses, Hadith, relevant poetry and logic. He would first quote verses from holy Quran then Hadith and then strengthen his argument with the couplets of Allama Iqbal and Sheikul Alam (RA). Notwithstanding his stormy style of speaking, it was always a treat to listen to him. He was intelligent from childhood. After matriculation, he completed a degree in Unani medicine and pursued graduation simultaneously. He had studied Arabic and Deeniyaat from Srinagar. He got appointed in the health department and retired as a medical officer. He served people in different districts of the valley. But his contribution to Bandipora is noteworthy, where people still recall his people-friendly approach. He had been instrumental in starting Friday prayer at many places including Hygam, Sopore.

Due to his eloquence and hold on different languages he was elected General Secretary, Unani Doctors Association many times. He would raise issues of his association without fear and favour. Dr Rehmat was a best poet, too. He was an important member of Daira Adab Delina (a literary forum) during its initial days. One can find his literary works in old newspapers, magazines and issues of local literary periodical Partav. His poetry is always thought-provoking. His various interviews on different aspects of the Unani system of medicine have been broadcast from Radio Kashmir. I remember on one occasion the producer of the programme asked Dr Rehmat as to which topic he can speak on. Dr Rehmat replied with a smile that any topic under the sky. This was the level of his knowledge.

Despite these tragedies, the man went on to live his life bravely and never let anybody to have an inkling of his inner pain. Dr Rehmat had a revolutionary mindset. He would tackle his problems head-on and keep living like a king. He was master of his own life. When he would speak, nobody could dare to interrupt him.

In his personal life, Dr Rehmat suffered a lot. He lost his father when he was just 12; lost his mother in youth and lost his elder brother in a tragic road accident. His wife died of a tumour. His well-wishers advised him to re-marry but he sacrificed his youth for his children. In early 1990s his loving son Qazi Farhat migrated to Pakistan. His intelligent daughter, Qazi Bilal Aishia died at the age of 20. Such a tragic background would pierce him within. Despite these tragedies, the man went on to live his life bravely and never let anybody to have an inkling of his inner pain. Dr Rehmat had a revolutionary mindset. He would tackle his problems head-on and keep living like a king. He was master of his own life. When he would speak, nobody could dare to interrupt him.

I have seen seasoned speakers shivering in his presence. They would acknowledge that it is extremely difficult to speak in front of a learned scholar like Dr Rahmat. Unlike his contemporaries, he had a stronghold on various languages, the prominent being Urdu, Persian, Arabic, Kashmiri and English. Quotations of prominent western thinkers and couplets of distinguished poets were on the tip of his tongue. His memory was so sharp that he would recall exact and relevant couplets as per the situation and topic of his discussion.

Although he was angry from outside but he had an affectionate heart. He always wanted to do something for society. Anjuman-e-Islahi Muslameem was perhaps the first socio-religious association of Delina and Dr Rahmat had the distinction of being its first elected president. The primary job of this extraordinary association was to organise religious programmes and discussions.

Further, it would hold environmental awareness campaigns in Delina. Under Dr Rehmat’s leadership, this association did a lot of commendable works. As far as his political ideology is concerned he would emphasize fundamentals and would strive to implement them on the ground. For him, the practice was more important than hollow knowledge and lofty ideas. He would call spade a spade come what may.  He was one of the important personalities to establish Jamat-e-Islami unit in Delina. Due to this, he got associated with Syed Ali Shah Geelani. The duo had a lot of meetings and interactions. Dr Rehmat’s speeches in Jamia Masjid Delina would always be thought-provoking.

Dr Rehmat was the man of mettle. He would never bow his head before anybody. He was robust yet humble, stormy yet good-humoured. And due to such traits he was the inspiration for youth. He was indeed an institution in himself. The man of principles bid adieu to this world on August 11, 2020. He is survived by three sons and two daughters.