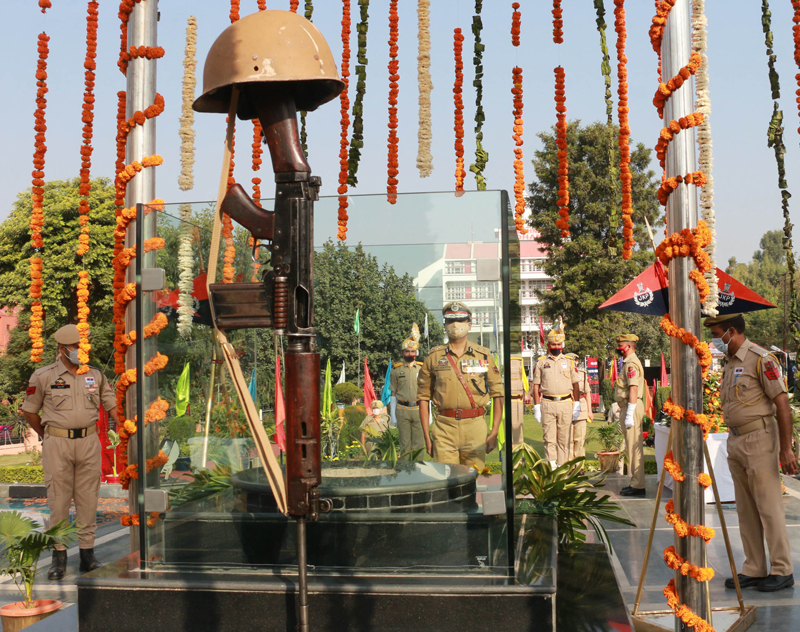 The upcoming ‘Martyrs Memorial’ in Srinagar will remove the veil of obscurity from an important part of Kashmir’s history that has been erased from public memory and it will also inspire the younger generation.

After more than three decades of political turmoil and armed insurgency, Srinagar is set to become home to the region’s first ‘Gaurav Stambh’, a martyrs memorial, which will commemorate the “amazing valour and sacrifice” of the security forces who have laid down their lives while “defending our beloved motherland.”

The announcement was made by J&K’s Lieutenant Governor Manoj Sinha in his Independence Day speech on August 15. Sinha said that the new address will be built in the memory of security forces who fought for “the unity and integrity of India,” and it will emerge as a “centre of inspiration for the new generation.”

According to an official spokesperson, the ‘Gaurav Stambh will also include a “museum of our brave hearts,” which will contain important artifacts and, according to sources, some “items of historical importance” will be put on display for visitors to learn about Jammu and Kashmir and its past.

A senior UT administration official, who didn’t want to be named, said that the “significant move” will “undo a grave historical wrong” committed in Jammu and Kashmir, where the death of security personnel killed in counterinsurgency operations was treated as a matter of secrecy.

The memorial will serve as a reminder of the cost paid by the security forces, and especially J&K Police, so that the UT is free from terrorism and nefarious attempts to disrupt peace are thwarted.

“It was an attempt to belittle and a refusal to accept the sacrifices made by the security forces in Jammu and Kashmir and to erase their contribution. The martyrs memorial in Srinagar will correct this historical wrong,” the official said.

Kuldeep Khoda, the former Director General of J&K Police, told Kashmir Scan that having memorials serves as a “constant reminder and recognition of the sacrifices made by martyrs,” and every security organisation owes it to its men who lay down their lives in the line of duty.

“Recognition of any positive contribution by any individual for an organization is always a morale booster for all those who work for the organization. In our case, it is not just a contribution but a supreme sacrifice made by our brave hearts for the unity and integrity of our country. Besides, such a memorial will serve as a source of morale booster for all officers and jawans of the force,” he said.

Kashmir already has a ‘Martyrs Memorial,’ but it has been built behind the high walls of Zewan Police Complex. In comparison, the J&K Police Martyr’s Memorial in Jammu stands at an important location near Railway Station Jammu, which is prominently visible to people and tourists.

“The police martyrs memorial (at Zewan) was erected with the above thoughts in the minds of police leadership. The memorial signifies the valour and recognises the martyrdom of all the martyrs of J&K Police,” the former J&K DGP told Kashmir Scan.

“Recognition of any positive contribution by any individual for an organization is always a morale booster for all those who work for the organization. In our case, it is not just a contribution but supreme sacrifice made by our brave-hearts for the unity and integrity of our country”

Another high-rank official of J&K Police said that there should be a memorial to pay tribute to hundreds and thousands of J&K police personnel who have sacrificed their lives in the line of duty.

“Just like we have a prominent memorial at the Rail Head complex in Jammu, we should have a similar one in Kashmir. We have a small one in Zewan Armed Police Complex and one at Baramulla, which nowadays is known as Akbar Chowk,” he said.

He further said that such tributes boost the morale of police forces, especially J&K Police, who have remained at the forefront with the Government of India in the fight against terrorism in Jammu and Kashmir and also handled law and order situations.

“It will serve as a reminder for the society about the cost paid by security forces and especially J&K Police so that our UT is free from terrorism and the nefarious attempts to disrupt the peace are thwarted,” the senior officer, who didn’t want to be named, said.

According to the J&K administration official quoted above, the process to identify the land in Srinagar has been set into motion, “We have identified some prominent locations in Srinagar where the ‘Martyrs Memorial’ could be set up. The site will be finalised after approval from the higher-ups,” the official said.

For the museum, which is going to come up alongside the ‘Martyrs Memorial’, the administration is also mulling procuring various artifacts and items of historical importance which will shed light on the role of J&K Police and other security forces in the fight against terrorists and terrorism.

“For a long time, only one side of Kashmir’s history has been projected to the common masses. The collection of items in the museum will shed light on the other side of history. The museum will educate our younger generation about the stories of great valour shown by the security forces in protecting Jammu and Kashmir,” the official said.