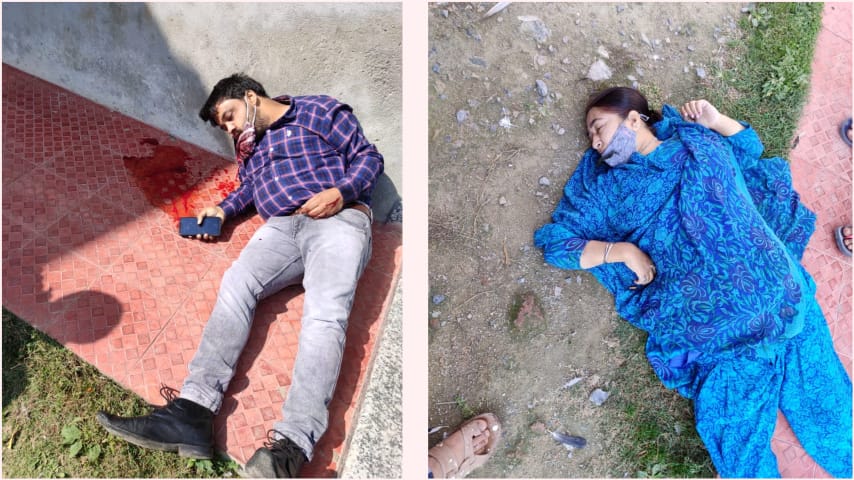 Two teachers were shot dead inside a government school in Srinagar on Thursday, just two days after three civillians, including a well-known Kashmir Pandit Chemist were killed in the Valley.
A police official said unknown gunmen barged into the Government Boys Higher Secondary School, Iddgah Sangam, in the old city and fired from a point-blank range at two teachers.
“Both the teachers were declared brought dead at a nearby hospital,” officials said.

Meanwhile, Director General of Police (DGP) Dilbagh Singh Thursday said that killing of unarmed civilians in Srinagar is a move to damage and attack the age-old traditional communal harmony in Kashmir and police has already got some clues about previous killings and will also probe the fresh incident too. He, however, was quick to add that the killers will be nabbed very soon.

“This is an attempt to defame local Muslims of Kashmir. Killing innocent civilians including teachers is a move to attack and damage the age-old tradition of communal harmony and brotherhood in Kashmir,” the J&K Police chief said as per news agency . He said killing innocents is a conspiracy to “target local ethos and values” which will be defeated by the police and people collectively.

He said that police have got some clues and leads about the killers in previous cases and that the fresh case will be probed too. “I talked to staff members of the school, and they are in total shock over losing two colleagues. Police will nab the killers very soon,” he said.