Home » Srinagar under drone surveillance ahead of I-Day 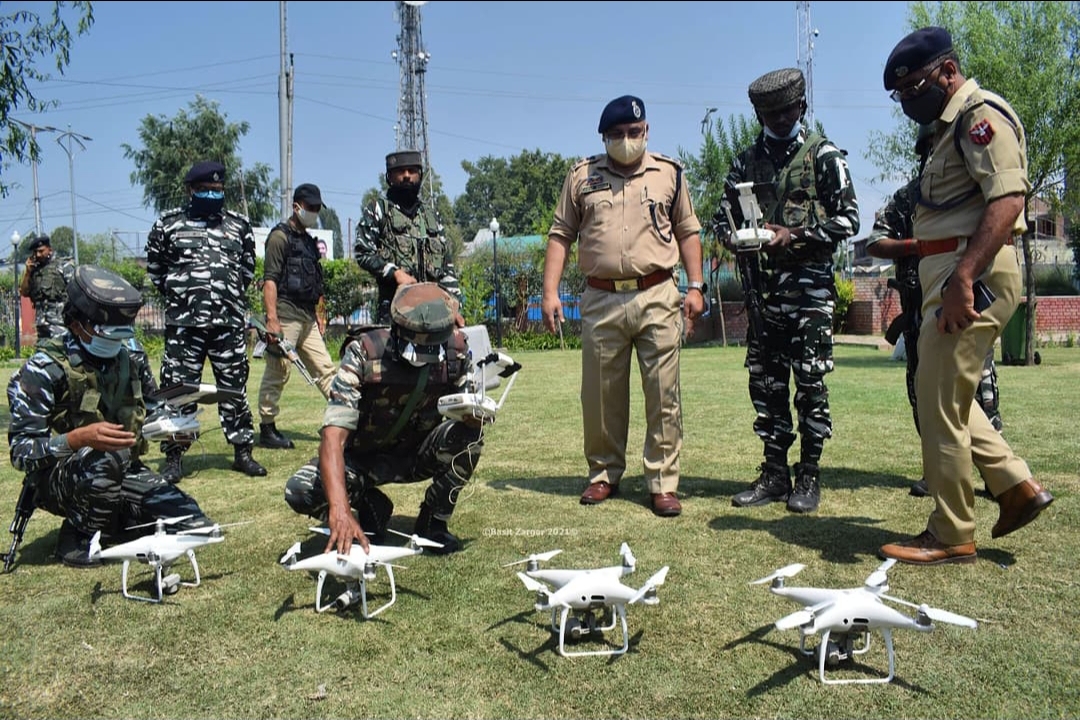 Police, CRPF conduct joint trial of drones at city center; Massive frisking Ops launched in Sgr; round the clock nakas set up in Lal Chowk, other sensitive areas, all CCTVs activated; multi-layer security cover to be in place for I-Day in Sgr, elsewhere, say officials

Srinagar: Security Forces on Thursday conducted a successful trial of drones in Srinagar to keep the city under aerial surveillance. At the same time, massive frisking operations were started ahead of Independence Day in the summer capital and elsewhere.

Officials told news agency—Kashmir News Observer that police and the CRPF jointly conducted the successful trial of drones at Pratap Park, Srinagar. “Drones will help in better aerial sureilaince for the smooth conduct of August 15 functions in Srinagar,” the officials said.

Talking to reporters, Sub-Divisional Police Officer (SDPO) Police station Kothibagh Ghulam Mohiudin said that since Independence Day is a few days away, they tested almost 12 drones for aerial surveillance to keep a close watch on suspects.

“There are sensitive areas in and around Lal Chowk that will remain under aerial surveillance till August 15 function passes off. The areas under surveillance include MA Road, Residency Road, Bund, Polo View, Maisuma and other adjoining areas of Lal Chowk,” he said. “Almost 12 drones are being used for the aerial surveillance to check the possible suspicious movement etc.”

The primary I-Day function will be held at S K Stadium Sonwar, Srinagar, where J&K Lieutenant Governor Manoj Sinha will unfurl the tri-colour. A police official told KNO that the main venue is being sensitised and additional forces are being deployed in and around the Stadium.

He also said that police and CRPF have set up round the clock check-points at various points in Srinagar that include Jehangir Chowk, Dalgate, M A Road, Sonwar, Pantha Chowk, and other adjoining areas to keep a close watch on the suspects. “Intensive frisking operations are being launched in Srinagar. We urge people to cooperate with the security forces till August 15,” the official said.

He said apart from the drones, Close Circuit Television (CCTV) sets have been activated across Srinagar as part of the security drill. “Sharpshooters will remain stationed on tall buildings near the main venue and also at the Sulaiman Hills till August 15,” the official said.

A senior police official told KNO that a multi-layer security grid is in place for the smooth conduct of the I-Day function in Srinagar and elsewhere in Kashmir. “Police, CRPF and the army are maintaining close coordination. The highest level of alertness is being maintained on highways and also on the other roads,” he said, adding that “they are hopeful to see a peaceful I-Day in Kashmir.”—(KNO)