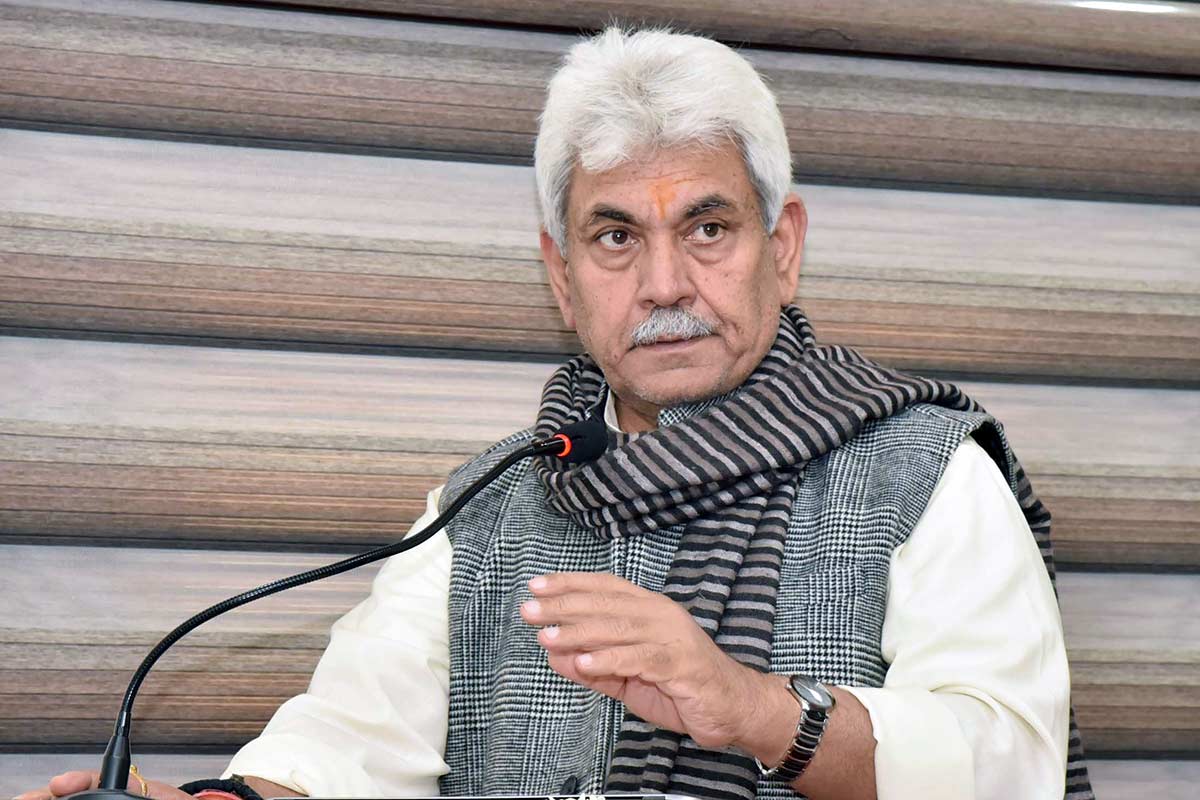 Says, entire J&K administration stands in solidarity with the bereaved family & every possible support will be extended to them

Extending his condolences to the bereaved family, the Lt Governor said that the whole UT administration is standing in solidarity with the family and would provide every possible support and assistance to them.

“My visit after last evening’s cowardly terror attack is a clear message to the terrorists and their sympathizers that we will root out terrorism from this pious land. The Government is determined to make development a mass movement”, the Lt Governor asserted.

Addressing a huge public gathering at Kund, the Lt Governor noted that the Government will not bow down to the nefarious designs and motives of terrorists. He said all those who are directly or indirectly involved in terrorist acts will not be spared.

The Lt Governor said that this holy land belongs to Saints and Sufi mystics and any kind of violence here is a crime.

Underscoring that Youths are the focal point of the government’s Developmental Agenda, the Lt Governor appealed everyone to join their hands for the progress and development of the UT.

“While the government is implementing policies and plans that will strengthen the young generation to fulfill their desire for progress, it is society’s collective responsibility to identify those who mislead our enterprising youth for their own vested interests.”, he added.

Emphasizing that youth is ready to transform the socio-economic landscape of J&K, the Lt Governor observed that it is only a handful of people who want to disturb the process of peace and progress. “The youth of J&K wants platforms to grow and become successful in life,” he said.

On the occasion, the Lt Governor also met the Indian Economic Service (IES) topper from J&K, Sh Tanveer Ahmad Khan and lauded him for his momentous achievement. He also felicitated professional cricketer, Arshid Magrey and termed them as inspiration for the youth of UT.

“A few days ago, Tanveer Ahmed Khan of Niginpora Kund village in Kulgam brought glory to the entire Jammu & Kashmir by securing AIR-2 in the IES exam. I have always believed that our youths are inherently capable and full of potential. I am sure his success will inspire the entire young generation to build a better future”, the Lt Governor observed.

Noting that the administration is working day and night for the progress of the people of J&K, the Lt Governor urged the younger generation to strive for peace, prosperity, development of the common man in order to transform the Union Territory.

The Lt Governor highlighted that Jammu and Kashmir is the land of sages, saints, and Sufi mystics and the fragrance of their words, ideals and teaching is in its every corner. Whether it is Nund Rishi, Simnani Sahib, all had spread the fragrance of peace and equality of all religions.

“All religions, whether Hinduism, Islam, Buddhism, Sikhism, Christianity, have flourished here and all have said one thing that progress is possible only through peace and love. If some people are being misled from the path of peace, then it becomes the responsibility of the elders to bring them back onto the right path”, added the Lt Governor.

The Lt Governor said that there is no place for people in the society who are radicalizing and brainwashing our youth. It is the collective responsibility of parents, teachers, and community elders to counter radical propaganda machinery.

Underscoring the importance of Education in the overall transformation of a society, the Lt Governor said that the government is continuously reforming the entire education ecosystem in the UT. We are plugging gaps, building infrastructure & human resource capacities, updating courses to match contemporary market requirements and skill sets.

“It is our endeavor to bring a combination of knowledge, wisdom, and necessary skill sets in the education system. Therefore, by making changes recommended by the new education policy, we are focusing more on vocational training, our ancient ethos, and values. This is providing dividends and they have more and more employment opportunities than before”, remarked the Lt Governor.

He said that even with 1.25 lakh teachers in our UT, relatively higher than other peer states/UTs, there are gaps in the system. To remove the gaps in education, we took a big decision and regularized 35,000 teachers who were working on contract basis, so that they can build the future of all the students with a vision. Further, sustained capacity building of educators is being undertaken by the government, said the Lt Governor.

The Lt Governor said that compulsory training of teachers was also started in J&K as per the ‘Nishtha’ program under the direction of Hon’ble Prime Minister, Shri Narendra Modi. He informed that J&K is number one in Nishtha program, today.

“Jammu and Kashmir is among the top in the whole country, in terms of education infrastructure and budget, despite having a less population. Our budget for school and higher education this year is Rs 1873 crore, which is Rs 523 crore more than last year”, he added.

The Lt Governor informed that during the Back to Village program, decision was taken for identifying the vacant government buildings and giving them to the Panchayats or other departments for use. It was found that a total of 663 school buildings in Kashmir division and 630 in the Jammu division were lying vacant. They are now being given to other departments for proper use.

“This is just a small example of how money sent by the centre for the welfare of people of J&K was siphoned off. We have made the governance transparent and each work is taken up only after due diligence. We are preparing our youth for Industry 4.0. We have set up two Modern Invention, Innovation and Incubation Centers at Baramulla and Jammu and 12 more such centers will be set up”, added the Lt Governor while addressing the public.

The Lt Governor said that work has been done at many levels and assured that the administration is working with utmost dedication for the prosperity of J&K and progress of its youth.

Noting that 14% of the population of Kund belongs to the Scheduled Tribes category, the Lt Governor said that instructions have been passed to provide the best education to the children.  Rs 30 crore has been disbursed as scholarships to the children from the Tribal community and this year 42,000 more students will be given scholarships than the last year.

“Overall scholarships have been given to more than 8 lakh children. In the last one year, 50 such new colleges have been set up, which will provide vocational and professional education with modern infrastructure to prepare the youth for employment. Mission Youth has been created and many programs have been started to empower boys and girls and provide them an opportunity to become entrepreneurs,” he added.

The Lt Governor said that the aim of the administration is to reach the doorsteps of people of J&K with good governance. The district capex budget of Kulgam this year is Rs 537 crore, which is three times more than last year. The infrastructure here, whether it is roads, electricity, or water, will witness change within a year, he said.

It has been 75 years since independence but the common man is still struggling for basic requirements like ‘Sadak, Bijli, Pani’. This is the unfortunate legacy that we have inherited but I assure you, the government will ensure that each and every penny is utilized for the people’s welfare and need for basic infrastructure is fulfilled within a year, the Lt Governor observed.

The Lt Governor further informed that Yaripora-Kulgam 33 KV Grid Station has been completed.

“It will prove to be a game-changer in the power infrastructure in this district. The project will soon be inaugurated and dedicated to the people. Similarly, for safe drinking water, the government is spending Rs 341 crore for Kulgam. I have full hope that District Administration and Jal Shakti Department will complete their target within the time limit, the Lt Governor said.