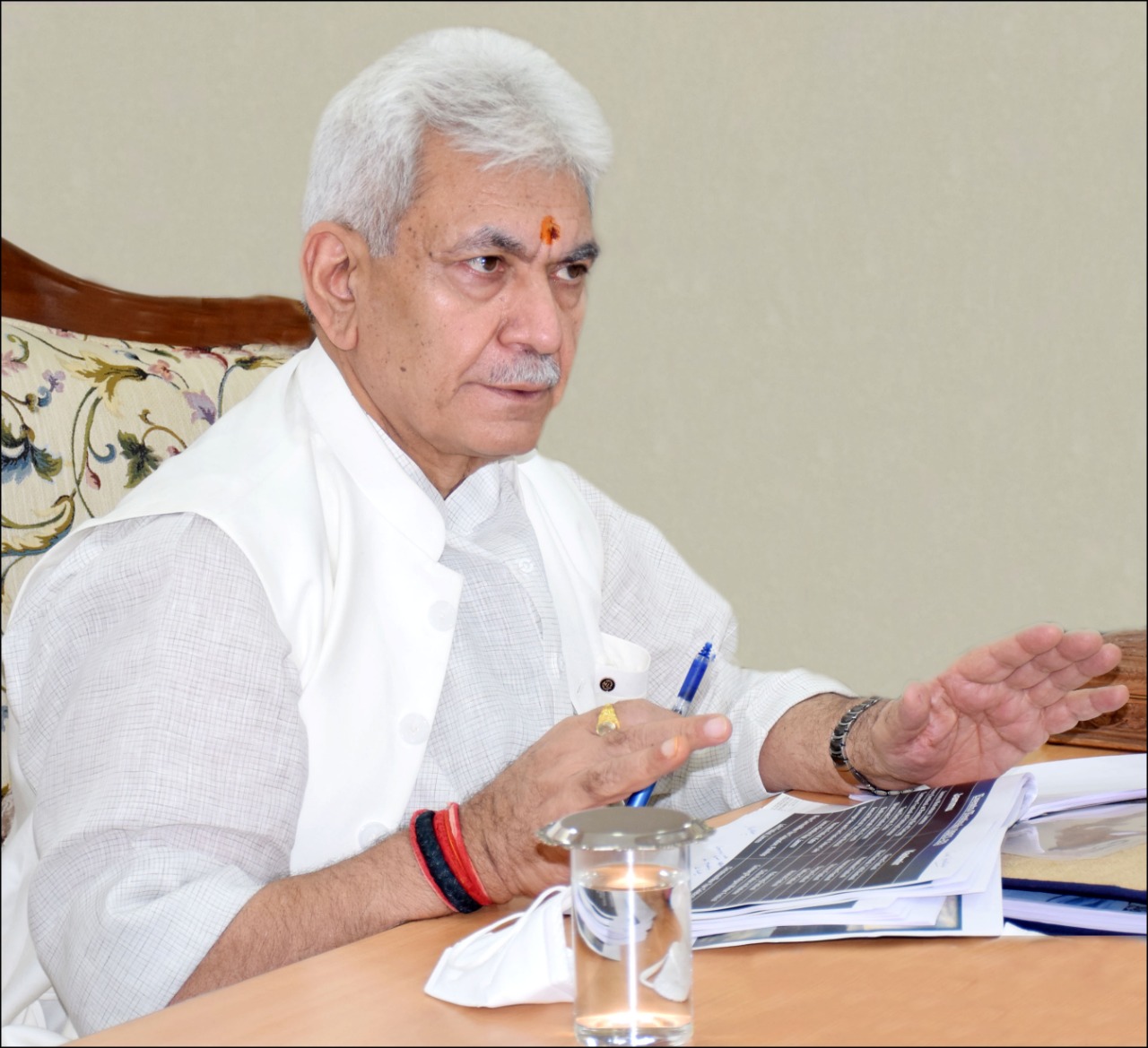 SRINAGAR, JULY 18: In the 4th episode of “Awaam ki Awaaz” radio programme, aired today on all local & primary channels of All India Radio (AIR) stations in the UT, Lieutenant Governor Manoj Sinha, while observing the upcoming Kargil Vijay Diwas, paid rich tributes to the brave soldiers and martyrs of the security forces.

“I bow to all the heroes, their valor and supreme sacrifice in the defense of the motherland and also salute the undaunted courage of their families. Today, the tricolor is waving with pride and J&K is entering a new era of progress all due to the gallantry of our soldiers”, he observed.

In today’s episode of Awaam ki Awaaz, the main focus was the enterprising Youth of J&K and the overall developmental agenda of the government, revolving around creating a host of opportunities for them, devising policies, and undertaking reforms that facilitate the fulfillment of their dreams & aspirations.

Noting that the youth of Jammu and Kashmir is inherently capable and talented; the Lt Governor said that the UT administration is committed to providing them the right platforms and have taken many historic decisions in this regard, including the establishment of Youth Clubs in all the Panchayats across the UT, in the coming weeks.

The Lt Governor informed that in the first phase, 25,000 young boys and girls will be connected with different cultural, sports, skill development, and community programs. J&K Sports Council is organizing at least 4-5 sporting events every day in different disciplines and the immense youth engagement clearly narrates their success stories. These steps have been highly appreciated on social media and will bring a new revolution in the field of youth engagement and employment.

He also spoke on the  ‘Parvaaz’ scheme started by the UT government for providing coaching of Civil Services and other examinations to the youth of J&K and reiterated that our endeavor is to provide the best coaching facilities to our children as the field of education is progressing continuously”, he added.

He mentioned that under “Mission Youth”, the administration has decided to provide financial assistance to 400 Dental Surgeons to start their own clinics and 800 paramedics are also being added to this programme. Further, a 360-degree training in financial services for youth in association with Bombay Stock Exchange aims to train 5000 youth with this collaboration.

On receiving over 6,000 suggestions in last one month, the Lt Governor said that people have expressed their views on various topics and strengthened the government’s commitment to work with public participation, thereby strengthening Jan Bhagidari which is the cornerstone of developmental agenda.

Welcoming the suggestions on reforms in education sector, the Lt Governor said that all the suggestions are very interesting and will have far-reaching impacts. He assured that the administration is fully committed to making progressive changes in the field of education with a comprehensive approach, to make it more skill-oriented, facilitating employability and entrepreneurship. The concerned departments will take necessary action on all these suggestions, he added.

He also mentioned some good inputs including one from Irfan Ahmad Bhat of Budgam suggesting the addition of Rural Development as a subject in Higher Secondary institutes and Degree Colleges. Mohammad Mohsin from Budgam, Sabiya Mehraj from Srinagar, Syed Ahmed, Javed Mir of Budgam, Narinder Swamy of Doda, Amit, and Abida Hassan of Kulgam, all suggested various innovative measures in the education sector and vocational training, besides making computer education compulsory in the schools. Shaista Amin of Srinagar also suggested for starting Ph.D. program in History at Cluster University Kashmir and Central University Kashmir.

The Lt Governor observed that along with the Government of India, the J&K administration is also working on the New Education Policy and all such employment-oriented and personality-building subjects will be included in the syllabi. We are also bringing reforms in higher education and skill development sectors, he added.

Lauding Sheikh Adnan Fayaz, a well-known athlete from Bandipora for winning gold medal for the country in Taekwondo, the Lt Governor said that the entire country is proud of his achievements. On his suggestions to encourage sports among the youth, the Lt Governor informed that the Government has already decided to take various sports to the Panchayat level and the Sports Council is doing this work with full dedication.  J&K is going to hold 17 national competitions in various sports in which about 12,000 players from all States and UTs will participate, he added.

On the issue of seasonal teachers highlighted by Javed Iqbal from Poonch, the Lt Governor said that the administration is concerned about their well-being and has also hiked their emoluments. “Our education department is preparing a comprehensive plan to increase the learning outcome of the children for the remaining six months and I assure you that a decision will be taken on it soon”, the Lt Governor added.

On receiving an overwhelming number of suggestions from the younger generation, the Lt Governor said that after reading them he is hopeful that the fresh whiff of energy and resolve of our youth will transform the socio-economic structure of the UT. “With the courage and foresight of younger generation, we will take J&K on a new trajectory of progress”, he added.

Expressing joy over the achievement of School Education Department, the Lt Governor informed that J&K ranks first with 80,600 primary teachers of J&K having been enriched under “Nishtha”, a training program for primary teachers through online mode. He further informed that it had been decided to constitute Educational Reform Committee of Teachers at various levels to inculcate a sense of empowerment among the teachers, besides improving the enrollment and performance of the students, making them more responsible towards their duty. “Social and economic development will reach the grassroots level at a faster pace only when all the experienced people and experts of their respective fields work together with the administration for the betterment of the citizens”, he added.

On the disruptions caused by recent rains in the UT, the Lt Governor said the concerned departments are keeping an eye on the situation in the cities and villages and every effort is afoot to redress the grievances of the common people immediately.

The Lt Governor said that many important decisions have been taken in the last 11 months to double the income of farmers in J&K and to make them socially and financially empowered as per the vision and guidance of Hon’ble Prime Minister, Narendra Modi. Keeping in mind the agricultural and horticultural products of respective divisions, various decisions have taken a tangible form and a new definition of farmer-centric development has been established.

The government is also providing state-of-the-art agricultural equipment worth Rs 65 crore to 30,000 farmers, besides an innovative irrigation facility to 25,000 farmers at a cost of Rs 91 crore, maintained the Lt Governor.

Mentioning Sh Rashpal Singh of Jammu, the Lt Governor said that he decided to grow strawberries this year instead of the traditional crops, which has increased his income 40 times. Similarly, for the first time, cherries from Srinagar have been exported to Dubai, which has now provided an international market for the crop to the farmers.

On the suggestions of farmers for establishing horticulture centre in every block, new Mandis and increasing the capacity of cold storage, the Lt Governor said that the administration is providing subsidy for establishing cold storage. He further informed that the present cold storage capacity of 1.6 lakh metric tonnes will be increased to 5 lakh metric tonnes in the next two years. The Lt Governor said that the UT administration is working on end-to-end solutions for the farmers, so that our agriculture sector can make a valuable contribution in the campaign of self-reliant India as envisioned by the Prime Minister.

Elucidating the measures taken in the partial unlock process, the Lt Governor said that keeping in mind the pandemic, the administration has decided that the tourists coming to each entry point will be strictly screened and will be allowed to go to the destination only after the report comes negative. Similarly, the annual Shri Amarnathji Yatra for this year is cancelled and arrangements have been made for the devotees to worship the Holy Ice Lingam and get prasad through virtual medium.

On suggestions received for the promotion and development of adventure and heritage tourism in hitherto unattended areas of Jammu Division, the Lt Governor said that efforts are being made vigorously to increase tourism in almost all the districts of Jammu division. The Lt Governor informed through ‘Awaam Ki Awaaz’ that instructions have been given to develop the tourism sector in a better way in all the 10 districts of Jammu Division. Tourist circuits have been made to promote Adventure, Cultural and Religious Tourism. Now the devotees coming to visit Shri Mata Vaishno Devi would reach other religious and tourist places as well.  A plan has also been prepared to develop Mantalai as a tourist destination and encourage tourism in remote areas of Kishtwar.

The Lt Governor said that officers of the department have also been asked to take necessary action to promote Jammu tourism circuit and organize a 3-month long Jammu Mahotsav at various tourist places in the division. Sinthan Pass and Mughal Road have been opened to the general public and the number of tourists is expected to rise in the coming days, he added.

Highlighting the role of ‘Nari Shakti’ in our culture and society, the Lt Governor said that women are considered as the embodiment of power. “Without the presence of women, without their social and economic independence, no progress is possible”, he added. The Lt Governor remarked that the administration is constantly taking initiatives to create an eco-system of women entrepreneurs in J&K. He mentioned the “Tejaswini” program and the “Hausla” scheme started by the J&K administration for the women, under which training and market linkages will be provided to them.

On receiving suggestions from women entrepreneurs, Mrs Gowhera of Srinagar, Ms Priya Varma of Jammu, and Ms Reva Raina of Mathola, Bhaderwah in handicrafts, IT, and horticulture sectors respectively, the Lt Governor expressed his gratitude and directed the concerned departments to take appropriate action on their suggestions. The Lt Governor further said that along with ensuring economic rights, UT administration is fully committed to protecting educational and social rights of women and provide them maximum opportunities.

Observing the negligence and callous behavior being shown by some people in following the corona protocol, the Lt Governor urged everyone to take precautions against Corona.

“I request you all to please be careful. Covid Appropriate Behavior is the most infallible weapon to fight this epidemic. By following the Corona protocol, you are not only saving your life but also protecting the lives of people around”, he added.

Concluding his address, the Lt Governor extended Eid-ul-Azha greetings to the people and appealed them to celebrate the festival by following the Covid protocol.