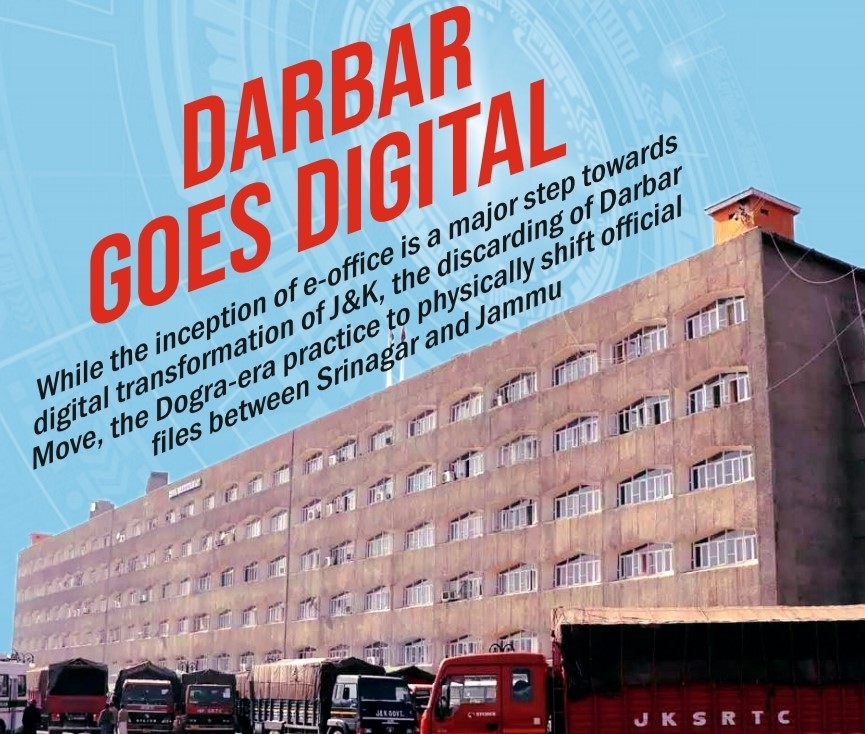 While the inception of e-office is a major step towards digital transformation of J&K, the discarding of Darbar Move, the Dogra-era practice to physically shift official files between Srinagar and Jammu, will save public exchequer hundreds of crores of rupees.

After many months of speculations, the Jammu and Kashmir administration has pulled down curtains on the archaic Dogra-era practice of shifting the capital between Jammu and Srinagar.

The process of physically moving hundreds of thousands of documents in hundreds of trucks along the treacherous Srinagar-Jammu highway twice a year was fraught with risks and cost the public exchequer hundreds of crores of rupees.

In his ‘Awaam Ki Awaaz’ program, which is broadcast on the All India Radio, J&K Lieutenant Governor Manoj Sinha said that while there will be no Darbar Move from this year, the civil secretariats in both Jammu and Srinagar would function normally throughout the year.

The move “will save the (J&K) government Rs 200 crore per year, which will be used for the welfare of the deprived sections,” the LG said while listing out the benefits of abandoning the practice.

The Darbar Move is believed to have been conceptualised by the Dogra monarchs who moved their durbar to Kashmir Valley when Jammu region is taken over by the blistering summer heat. The first Darbar Move dates back to 1872 when Kashmir was an independent kingdom ruled by Gulab Singh.

After independence in 1947, the tradition was continued by Jammu and Kashmir’s political class. They argued that it was necessary to shift the top officers of the administration between the twin capital cities for the equitable development of Kashmir and Jammu regions.

The move also allowed two diverse communities in Kashmir and Jammu regions who come from different linguistic and cultural backgrounds to intermingle and socialise with each other.

According to officials, around 9000 employees and their families would shift between the capital cities twice a year which also spiked the economic activity there. Some of the employees have also bought properties in Jammu region. The administration has now asked these employees to vacate the ‘Darbar Move’ related accommodations in three weeks.

“Cancellation of allotment of residential accommodation of officers/officials at Srinagar who are stationed at Jammu, and at Jammu, who are stationed at Srinagar. Employees shall vacate their government residential accommodation under occupation within 21 days from the date of issuance of this order,” reads the order of the J&K Estates Department issued in June.

However, the non-gazetted employees of the civil secretariat have asked the administration to extend the time period till November 2021.

In a letter to the Chief Secretary Dr AK Mehta, the employees have expressed “difficulties” in complying with the order “in view of the anticipated third wave of Covid-19” and the lack of “availability of transportation, grant of advance Travel Allowances and Dearness Allowances to carry the belongings and treatment of period required for purpose as a duty.”

“Adequate arrangement of boarding and lodging should be provided during the stay (of employees) in Jammu and Srinagar till employees vacate their quarters. The period involved in vacating the quarters may be treated as a duty in respect of all such employees,” the letter states.

Jammu Muslim Front (JMF) said the move to cancel the Darbar Move has led to uncertainty among the Jammu-based traders.

“It will affect the business of Jammu and widen the gap between the people of Union Territory. Small businesses whose main customers are Kashmiri will be badly affected,” Shuja Zaffar, JMF president, said.

However, there are strong arguments that favour abandoning the practice primarily because the administration doesn’t remain in either of the two cities at the time of their need.

During winter when Kashmir faces shortage of essentials and power supply as snow cripples normal life and connectivity is upended, top officers of the administration are basking in the winter sun of Jammu.

And when Jammu reels under heatwave during summers causing massive power outages, these officers are enjoying the pleasant climes of Kashmir.

“Now the officers will remain available in both the cities for timely interventions in the developmental matters as well as to address the grievances of people,” said a senior officer in J&K’s law department.

In 2020, Chief Justice Gita Mittal and Justice Rajnesh Oswal of the J&K High Court had suggested the discontinuation of Darbar Move because “it burdens the exchequer”.

“If this practice was rationalised, the amount of money, resources and time, which could be saved, could be utilised towards the welfare and development of the UT [Union Territory],” the court had observed.

The government, however, started the process to end the practice on March 31 this year when it announced that “concrete steps” were being taken “to switch to a paperless office by rolling out e-office in the moving departments”.

A senior officer in General Administration Department said a total of 2,07,81,097 pages comprising 350417 files belonging to 37 state departments of Jammu and Kashmir were digitised in “mission mode”.

“Since the program (to go paperless) was launched on April 15, 2021, over 1,79,408 e-receipts have been digitised, and more than 15,536 e-files have been created. All these digital files have been moved to e-office,” the officer said.

Amid the second wave of Covid-19, which took a massive human and financial toll on the country, the J&K admin halted this year’s darbar move, which was scheduled to begin in the last week of April.

Then, as the digitisation process was completed, for the first time in the history of J&K, the official files which moved with Darbar Move to Jammu in October didn’t return to Srinagar.

“For the first time, the files have been digitalised and have been put in the e-Office mode. The files are now available both at Jammu and Srinagar offices. This is important for the developmental project,” divisional commissioner Kashmir PK Pole said.  “When the capital shifted to Jammu, Kashmir’s developmental activities used to be hit by slumber and vice-versa. Now it won’t happen because top officers will be available whenever and wherever they are required,” he said.