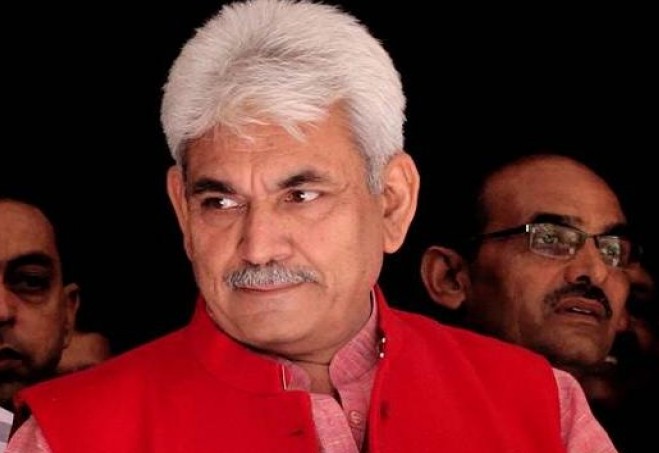 Wild rumours about New Delhi planning another “big move” kept Jammu and Kashmir on the edge in the past couple of weeks. Clearing the air, LG Manoj Sinha said these are attempts by vested interests to disturb peace in J&K

After weeks of intense rumors which kept the security agencies on tenterhooks, Lieutenant Governor Manoj Sinha finally cleared the air, terming them as attempts by anti-national elements to disturb the peace in Jammu and Kashmir.

“These are baseless and mischievous conspiracy theories circulated by a small section of anti-national elements. Such rumours are also being fanned by certain elements based outside India,” Sinha said in an interview with a Mumbai based TV network.

Since Sinha’s visit to the national capital earlier this month, Jammu and Kashmir has been in the grip of speculations that the central government was planning to further bifurcate the union territory.

Speculations were also rife that the Centre was planning to carve out another administrative division in Jammu and Kashmir by merging some districts of south Kashmir with some of Chenab region.

“THE NO NONSENSE ADMINISTRATOR”

Lt. Governor, Manoj Sinha in his tenure of less than eleven months in Jammu and Kashmir, has attained an impeccable reputation as the no-nonsense administrator. He has rejuvenated the bureaucratic-security ecosystem by focusing on the deliverance of governance and transparency in administration. Known for resolute follow up of impending administrative tasks and projects, Sinha’s non-controversial demeanour and clean image has gained him immense popularity across the Union Territory of J&K. Reaching out to the masses in unconventional style and bridging the bureaucratic gap in between has infused a new hope among people who more and more are getting oriented towards developmental politics. With his warm approach, the space for sentimental politics is shrinking especially in Kashmir valley.

“Those who don’t have anything meaningful to do are taking support of rumours and emotions to mislead public for their own vested interests. Some people are not happy with the peace and the development underway (in J&K) and they are fanning conspiracies to mislead people of J&K,” he said in the interview, without naming anyone.

“People of Jammu & Kashmir are really not concerned about it. They don’t have anything to do with all these rumours. These (rumours) are being fanned by forces on social media who are based outside (India),” he added.

LG Sinha, however, said these troops were deployed in poll bound states of West Bengal and others. “The deployment of paramilitary forces doesn’t mean anything. These personnel were deputed outside for elections. Some have returned and some are in quarantine. Now they are moving to their respective postings,” he said.

The LG said the movement of security forces is a normal practice during the Amarnath yatra. The annual pilgrimage to the cave shrine in the Himalayas is scheduled to start at the end of this month but registrations were stopped earlier this year as Covid-19 cases started to surge.

“We had started registration (of pilgrims for Amarnath Yatra) but we stopped it because of COVID surge,” he said.

Sinha said his administration has taken several measures which have proved effective for controlling the spread of the novel coronavirus infection. “The final decision (on Amarnath Yatra) will be taken after proper assessment of the situation.”

“Saving the lives of people is more important,” he added.

Reacting to the interviewer’s question on the alleged discrimination between Jammu and Kashmir regions of the union territory, LG Sinha said the J&K admin has not taken a single decision in the last 11 months to suggest that the two regions were being treated discriminately.

“That time of discrimination is long gone. Much water has flown down the Jhelum river. Both (Kashmir and Jammu) are our two eyes and they are equally vital for us.”

On the question of the demand for statehood in Jammu region, LG Sinha said people have the right to have an opinion in a democracy. “During my meetings with the Home Minister (Amit Shah) and others in New Delhi, there was no discussion on this issue,” he said.

Asked about the latest meeting of the Gupkar alliance at the residence of the PDP chief Mehbooba Mufti in Srinagar, Sinha said the Indian Constitution gives people the right to speak and have an opinion.

Headed by National Conference president Dr Farooq Abdullah, the Gupkar alliance met after a gap of more than six months amid reports that New Delhi has reached out to the Kashmir based parties to restore political activities in Jammu and Kashmir.

There are reports that the Centre might hold the much delayed assembly elections in Jammu and Kashmir which is presently under the direct control of the BJP’s central government.

LG Sinha said the Prime Minister Narendra Modi has already announced from the ramparts of the Red Fort during his Independence Day speech that once the Delimitation Commission finishes its work in J&K, the assembly elections will be conducted.

The commission has been tasked for redrawing the constituencies of J&K and increasing the elected members from 107 to 114.

“The promise has also been made in the parliament. The election commission will make the announcement (of election dates) once the commission finishes its work. All the Deputy Commissioner (of J&K) have been asked 18 questions by the delimitation commission which has been formed by an act of parliament,” he said.

“If the MPs of National Conference attend the proceedings of the commission, it means they are fulfilling their constitutional obligations,” he said.

LG Sinha said the winds of change have started blowing in Jammu and Kashmir which is visible from the tricolors flying on all the government buildings, “Record number of Indian and foreign tourists are visiting us. By March end, there was no space in any hotel till June. Even tourists know there is no security issue in Kashmir,” he said.

The Lieutenant Governor said the incidents of terrorism and militant recruitment have come down. “Security forces are in complete control. They have an upper hand over militants. There are a handful of people who want to disturb peace but we will not let them succeed at any cost,” he said.

“There are some standalone terror incidents, deliberately done to vitiate the atmosphere of peace and development.”