Home » ON THE BRINK 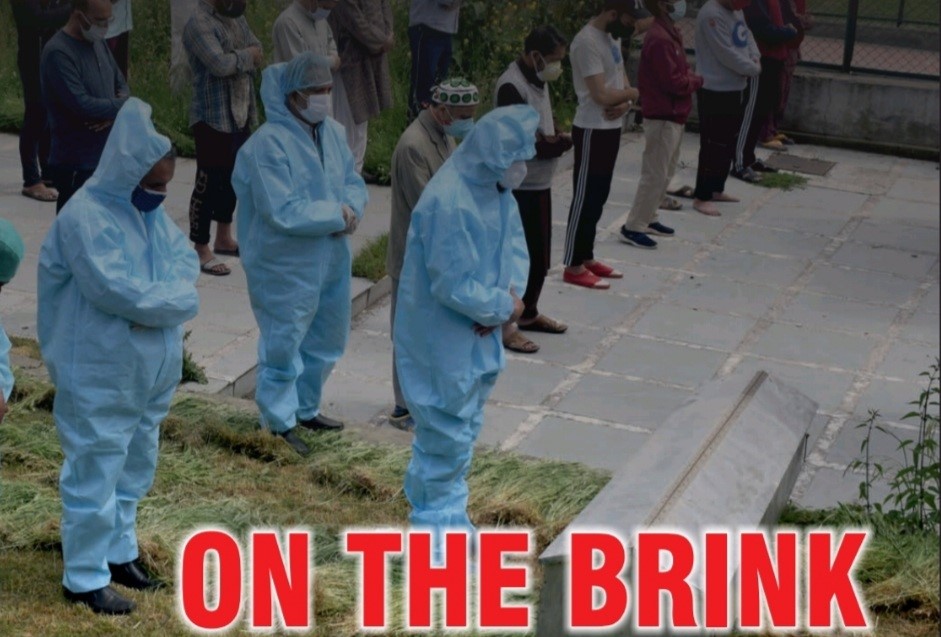 As the second wave of Covid-19 leaves a trail of agony and death in India, Jammu and Kashmir is running out of time to build strong fortifications and ramping up its network of defences against the virus.

Jammu and Kashmir is sitting on a powder keg.

With the second wave of novel coronavirus leaving a trail of suffering and death across the country, the union territory is setting new records in daily fatalities and new infections.

On April 29, 30 people were reported dead by Covid-19, the worst figure since the pandemic broke out last year. With daily cases shooting up in the past couple of weeks, coinciding with the second wave that is sweeping across the country, the UT’s health sector has started feeling the heat.

“We don’t know the scale of infection yet because testing had come down significantly since January this year. If the situation implodes, we should be at least prepared to handle it”

J&K recorded a spurt of over 350 per cent in daily infections in April. The positivity rate, which determines how widespread the infection is in a target group, has also shot up from 4.2 to 18.4 per cent across the country. In the face of the crisis faced by the state-of-the-art hospitals in top metropolis cities such as Delhi and Mumbai, the admin in J&K seems to have raised its hands already.

According to officials, there are 5000 beds in Jammu and Kashmir’s hospitals for handling seriously ill COVID-19 patients, of which around 2000 beds are occupied, about half of them since last week only.  Doctors say the oxygen demand has also shot up significantly, prompting the administration to trial-run the oxygen generation plant in Srinagar that will churn out 100 litres of medical oxygen per minute.  Also, many prominent hospitals in Srinagar city have started running out of beds and drugs such as Remdesivir for those critically ill, undermining the fight of Kashmir’s medicos against the Covid-19.

“We don’t know the scale of infection yet because testing had come down significantly since January this year. If the situation implodes, we should be at least prepared to handle it,” said a senior doctor at Srinagar’s premier SMHS hospital, who didn’t want to be named.

Atal Duloo, the deputy chief of J&K’s Covid-19 task force, said it is a “challenging” time for the administration.

“Whether it is the street, public transport, office spaces or markets, many people don’t follow Covid-appropriate behaviour, raising the stakes for the administration”

“When the pandemic peaked last year, we had 22000 positive cases. This year, we are on the verge of crossing that figure, but 8.12 per cent more new cases are added on a daily basis,” Dulloo said.

According to medicos, the peak is going to come in mid or ending May. With at least two weeks still to go, the situation seems to be on the verge of implosion.

As the infection spreads like wildfire, the admin has issued a slew of directions to counter it, involving traders, civil society activists and even religious leaders. Over the past couple of weeks, the J&K police have stepped up drives against people violating SOPs.

With the ongoing Ramzan festivities, markets have been bustling with shoppers. Many prominent mosques and shrines, including Srinagar’s Jama Masjid, have been shut down to curb the spread of the virus.  However, whether it is the street, public transport, office spaces or markets, many people don’t follow Covid-appropriate behaviour, raising the stakes for the administration, which is caught between the devil and the deep sea.

If the admin imposes a prolonged, crippling lockdown, it risks injuring the fragile economy of J&K, which was seemingly gaining some footing this year. On the other hand, if the economy is allowed to run with localized restrictions, it means putting public health at risk. The quandary that the UT administration finds itself in has provided ammunition for the mainstream parties in Kashmir to fire salvos at the admin for its alleged failures.

“Instead of imposing lockdown, the government should come up with a comprehensive roadmap by taking all the stakeholders on board. These spur of moment decisions aren’t going to be very helpful,” said M Akbar Lone, senior National Conference leader.

The J&K administration has been living in a denial mode until now. It failed to scale up the existing infrastructure in hospitals, Lone, who is also Lok Sabha member from north Kashmir’s Baramulla constituency, said.

Experts believe J&K still has the time to build smart fortifications against the disease by preventing gatherings and at the same time religiously following Covid-appropriate behaviour at home, offices and public places.

“The lockdown strategy causes collateral damage to education and economy. It can’t defeat the virus. We have to find a way to live with the virus, which can become possible through sustained mass vaccination drives,” Prof Noor A Baba, former Dean of Social Sciences at the University of Kashmir, said.

Shoring up its defences, the UT administration led by Lieutenant Governor Manoj Sinha has announced a vaccination drive for people above 18 years of age from May 1, although the drive may suffer a hit due to the shortage of vaccine in the country. Sinha has also asked the private hospitals to increase bed capacity for COVID patients. Plans are also afoot to reopen the Covid-wellness centres that were closed last year. Some of them have already started functioning. The DRDO has also pitched in. It has announced plans to construct two 500-bedded Covid hospitals in Srinagar and Jammu cities.

Experts are warning that given the state of the health sector in J&K, the second wave can be disastrous. Many public health analysts and doctors are battling to close the air and road borders with those states in India that have been worst hit by the pandemic this year.

There is also a need to curb religious gatherings. While some of the prominent mosques and shrines in Kashmir have been restricted for visitors, the government is yet to take a final call on allowing the annual Amarnath Yatra, which will attract thousands of devotees.

“If it can’t suspend the Yatra, the government needs to regulate it at least by allowing a limited number of devotees,” Prof Baba said. According to officials, more than 30,000 aspiring pilgrims have already applied since the online registration started on April 1.

The Shri Amarnathji Shrine Board had commenced registrations on April 1, and the arrangements are on track since February 2021 for successful conduct of the pilgrimage, “which is expected to start from June 28 2021. The decision (to suspend registration) has been taken to check any unnecessary gatherings,” a J&K government spokesman said.

As the last-ditch measure to arrest the spread of the virus, a complete lockdown has been imposed for 84 hours starting Monday at 7 pm in 11 out of 20 districts of Jammu and Kashmir.

Kashmir is the worst hit among the UT’s two regions.  Seven of the districts where lockdown has been imposed are in the Valley alone. The summer capital Srinagar, which hosted the tulip festival in March, remains the worst hit, reporting nearly half of total daily cases.  We can deal with the present situation, but it will become impossible beyond a point, the SMHS doctor quoted above said.