Home » Tourism: On the Revival Path 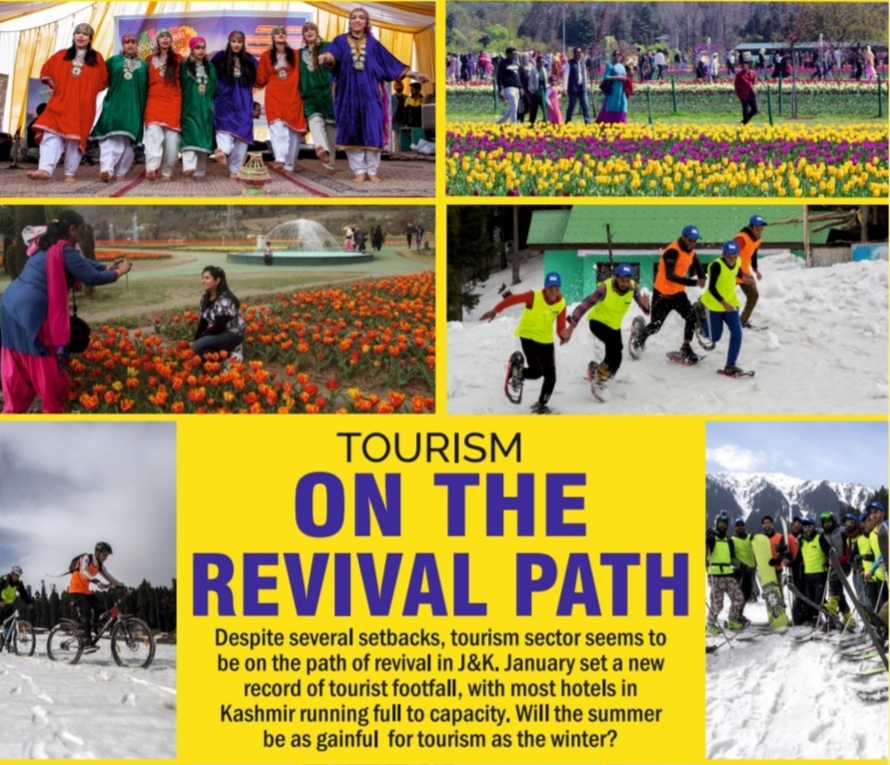 Despite several setbacks, the tourism sector seems to be on the path of revival in J&K. January set a new record of tourist footfall, with most hotels in Kashmir running full to capacity. Will the summer be as gainful for tourism as the winter?

The tourism sector in Kashmir seems to be on the path of revival. According to official figures, this winter Kashmir witnessed a record-breaking footfall of tourists in recent years. The government is hoping that the jump in numbers has set the right tone for a bumper tourist season in the Valley this summer despite the Covid-19 pandemic becoming a big roadblock for both domestic and international travelers.

“In December last year, around 13237 tourists visited Jammu and Kashmir, which got even better in January with over 19000 visitors arriving in the union territory. Despite a record-breaking snowfall and closure of air and road traffic for many days, 1.13 lakh tourists have arrived in Kashmir since December.” Director of Tourism, Kashmir, Dr GN Itoo, said.

Compared with this year, the official said only 3700 tourists had visited J&K in January last year. “This uptick in tourist footfall hasn’t happened in a vacuum. It is a result of the multi-pronged efforts of the central government as well as the UT administration. These efforts are now bearing fruits,” he said.

The government of India is banking big on the J&K’s tourism industry to revive the sagging economy of the union territory where commerce and trade has suffered a number of setbacks due to the crippling lockdowns, first in the aftermath of the abrogation of Article 370 in 2019 which was followed in the next year by the Covid-19 pandemic.

According to estimates, the tourism sector faces over ₹2,615 crore revenue loss and around 65,000 job losses after J&K’s special status was revoked in August 2019.

Like in the rest of the country and across the world, the pandemic had also led to an increase in unemployment in J&K as the service-industry driven tourism and other allied sector had to shut doors to thousands of their employees amid fears of the spread of the novel coronavirus.

However, this year is special for Jammu and Kashmir for more than one reasons because New Delhi has taken several steps in 2020 to improve connectivity and promote the union territory as not just a favoured tourism destination for domestic travellers but the globe trotters all over the world.

Officials said the focus of the tourism department last year was not just to promote Gulmarg, Yusmarg, Pahalgam and other known places as tourists destinations but also to use the blend of Kashmir’s rich arts and crafts for diversifying the sector.

“Besides rivers, meadows, and snowcapped mountains, Kashmir has much more to offer. There are sites of religious and historical significance, culinary tourism, heritage, and arts and crafts. We will be offering different packages according to the needs of travelers,” the official said.

“With more tourists coming, there will be a revival of the economy which will also provide employment opportunities for J&K’s youth,” the tourist department official said.

The first big move to improve the connectivity to J&K was the announcement about the start of the evening flights at the Srinagar International Airport, a long pending demand of the tourism industry stakeholders.

“Now there will be direct flights from Ahmedabad, Chennai, Kolkata and Hyderabad to Srinagar. We are also exploring options of regular flights from other cities of the country,” Sarmad Hafeez, J&K’s tourism secretary, said at a recent event in Srinagar.

Another officer in the tourism department, who is not authorised to speak with the media, said that in view of the Covid-19 pandemic, the government focuses on promoting Kashmir as a prime tourism destination for domestic tourists.

“This winter has shown that we have succeeded to some extent in this regard, and we will use these gains to lure foreign tourists to the UT with a focus on adventure, religious and culture tourism,” the official said.

In a recent event on reviving tourism in Jammu and Kashmir which was held at Sher-e-Kashmir International Convention Centre, Lieutenant Governor Manoj Sinha said that through aggressive promotions, efforts are being made to boost its popularity further this year.

“I am grateful to Prime Minister Narendra Modi for granting Rs 786 crore in Jammu and Kashmir’s budget for the development of tourism. This is Rs 509 crore more than last year’s budget. The potential and possibilities for developing tourism in the state are immense,” Sinha said at the event titled “Tapping the potential of Kashmir: Another day in paradise”

The three-day event was sponsored by the union tourism ministry, and it was attended, among other dignitaries, by the union minister of state for tourism and culture, Prahlad Singh Patel.

“We have invited all the stakeholders to meet, discuss and give suggestions to improve the flow of tourists into Jammu and Kashmir and to create better opportunities and infrastructure,” Patel said.

“In December last year, around 13237 tourists visited Jammu and Kashmir, which got even better in January with over 19000 visitors arriving in the union territory, despite a record-breaking snowfall and closure of air and road traffic for many days,”

Besides tourism, the government is also taking steps to revive the romance of Bollywood with Kashmir. To this end, LG Sinha recently announced that the union territory would come out with a ‘Film Policy’ this month. The policy is expected to set the tone for the return of not just the big production houses of Bollywood to the Valley but also other big national and international banners.

On January 28, the proposal to lure filmmakers got a boost when a 24-member delegation of Bollywood production houses representing Ajay Devgun Films, the Sanjay Dutt Productions, the Reliance Entertainment, the Rohit Shetty Films, the Zee Studios, the Adhikari Brothers & SAB (Marathi), the Endemol, director Rajkumar Hirani and the Excel Entertainment among others arrived in Kashmir.

“We are an ideal location for filmmakers and tourists because visiting Kashmir comes at one-fourth cost of what you would ideally spend to visit similar places like Switzerland. We have some of the world’s finest meadows, pristine water bodies, and majestic, snowcapped mountains that can give Swiss Alps a run for their money,” the second official quoted above said.