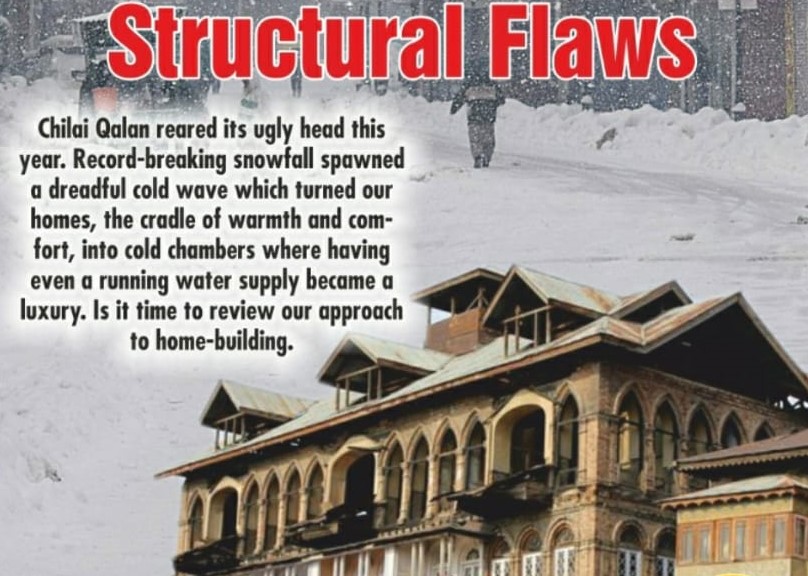 Chilai Qalan reared its ugly head this year. Record-breaking snowfall spawned a dreadful cold wave which turned our homes, the cradle of warmth and comfort, into cold chambers where having even a running water supply became a luxury. Is it time to review our approach to home-building? A Kashmir Scan report.

On a cold January morning, Mansoor Rasool, a teacher, woke up for offering predawn prayers. Inside the washroom to perform ablution, he found the taps in deep frost; even the one connected with the electric geyser was clogged by ice. The sight made him sad and angry at the same time.

Unable to find any tap of the house in working condition, Manzoor, father of a son and two small daughters who live in Srinagar’s Natipora locality, picked an empty bucket from the washroom, wrapped a blanket around himself and lumbered into the park outside.

Winter in Kashmir has been excessively harsh this year. And the situation was not entirely different in other places. Such was the intensity of the cold that people started playing cricket and other sports on the Dal Lake that was completely frozen, reminiscing of the feat achieved by J&K’s former chief minister Bakshi Ghulam Mohammad who is reported to have driven a jeep on the lake some decades ago.

“A gust of cold wind slapped my face as I stepped out of the house. I have seen frosty roads and icy conditions but to warm snow for water has been a completely new experience,” he said. On several days, Manzoor had to repeat the drill; wake up in the morning and get bucketfuls of snow from the park. It was only in the afternoons that the warmth of the sun thawed the water pipes in their home.

Winter in Kashmir has been excessively harsh this year. And the situation was not entirely different in other places. Such was the intensity of the cold that people started playing cricket and other sports on the Dal Lake that was completely frozen, reminiscing of the feat achieved by J&K’s former chief minister Bakshi Ghulam Mohammad who is reported to have driven a jeep on the lake some decades ago.

In some villages of Kashmir, along the majestic Pir Panjal mountains, six to seven feet or even more snow was recorded. Besides record levels of snowfall, minimum temperature crossed old milestones to set new records.  The summer capital Srinagar recorded minimum temperature of minus 8.4 degree Celsius, the lowest in three decades, according to the Srinagar station of the Indian Meteorological Department (IMD).

In the south Kashmir districts, which bore the brunt of snowfall and cold this year, temperatures slumped to minus 15 degree Celsius and even less in Shopian and other areas. The harsh winter didn’t spare even the Jammu region where the minimum temperatures went down to 1.8 degrees Celsius, the lowest in 38 years, according to IMD.

“Shopian was in competition with Drass for the lowest recorded temperature,” Tamseel Nabi, a student at Shopian degree college, said, sarcastically “Thankfully, a community tap was running normally and we were able to get water from there.”

Unlike Manzoor, Tamseel and his family were lucky to find water close to their home. Many others, especially in the far flung areas of Kashmir, had to either walk several miles to reach the nearest water stream or contend themselves with whatever little water they could extract from melted snow.

For those on the lower social and economic rungs of our society, the problems were manifold and sometimes even catastrophic. On January 18, two nomad children died due to excessive cold inside their ramshackle accommodation made of tarpaulin sheets in Kulgam district.

Earlier in January, a sick child from Gund Shams village on the outskirts of Chrar-i -Sharief succumbed in the arms of his father, Mukhtar Wani, while they were on their way to the hospital for treatment. Due to massive snowfall, the road to the village was inaccessible for vehicular traffic.

Amid severe cold conditions, people preferred to stay indoors, sometimes for days without end. In such situations, when the weather isn’t favourable and there isn’t much to do, relying on your home for warmth and comfort is a natural outcome of the human instinct for survival.

However, the showy architecture of houses in Kashmir, especially the ones that have come up in recent years which have more ornamental value than comfort, ended up adding to the miseries that the people faced during this winter.

Experts blame unplanned urbanisation, ill-conceived designs of houses and rampant use of cement, gravel and sand for construction without any focus on insulation for the aggravation of cold conditions in houses across Kashmir.

In olden times, says Zareef Ahmad Zareef, a Kashmiri poet, writer and social activist, Kashmiri homes were built with low ceilings, less number of windows and thick walls made of mud and bricks that retained heat during winter and stayed cool during winters.

“Often family members would sit in the kitchen where the heat from the hearth would keep everyone warm. Now we are seeing this trend of high ceilings and big windows which turns a home into an icebox during winter,” Zareef said.

“In European countries,” said Sheikh Miftah, who works as an engineer in J&K’s R&B department, “the focus of engineers is more on insulation of buildings than how the buildings appear. But it is completely opposite in our case.”

“Our engineers focus more on presentation than comfort. Besides, we don’t have skilled artisans like carpenters and masons who know the art of insulation. This complicates the problem even more,” Miftah said.

In recent years, the trend of having Hamam, a room whose floor is made of slabs of stone, has picked up in Kashmir. The Hamam is heated up by burning wood beneath the stone floor. But with poor insulation measures, the heat gets lost as soon as the wood has burnt out.

A properly insulated home retains the heat during winter while in summer, it helps to keep the heat out of homes, said Miftah. “If homes are insulated, we consume less energy by burning less fuel such as wood (for Hamam) during winter. In summer, there is reduced demand for energy to run appliances such as air conditioners.”

For insulation, says Miftah, house owners can use cheap items such as straw or modern material like glass fibre, cellulose, polyurethane foam, polystyrene, wool and other such materials.

A study in the International Journal of Ambient Energy by HA Bhat and S Rubab points out that modern buildings in Kashmir are not designed to meet heating requirements. It notes that new houses have “poor insulation levels and loose-fitting doors and windows, thereby contributing to huge heat losses.”

Then there are issues about the alignment. A house facing the north, from where the cold winds blow during winter, will remain perpetually cold. But many people and even engineers and architects have no understanding of this basic concept.

“Our preference is to make a house which is facing the road, regardless of the direction,” said Miftah.

Experts argue that the contemporary architecture in Kashmir is unsustainable due to the effects of global warming which is making summers hotter and winters harsher across the globe. They say that the government must take the lead and intervene by designing a policy framework for the designs of houses with focus on insulation and alignment.   “We must discontinue the use of cement plaster on the walls of our homes. Floors must be ideally made of mixture of clay and straw or timber which are not only environmental-friendly but also retain heat. These small interventions will go a long way to make our homes liveable and comfortable,” Miftah said.