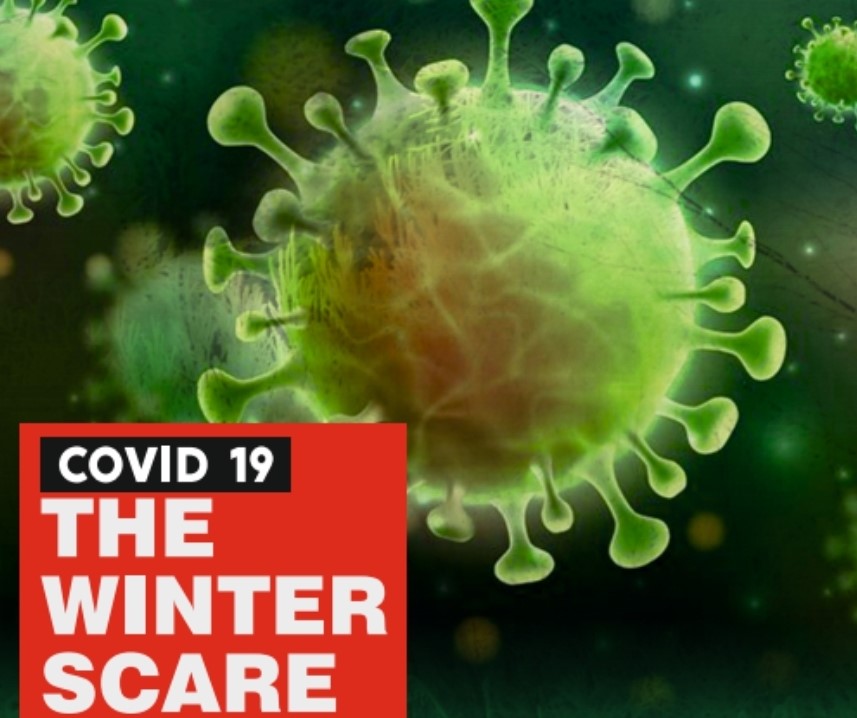 Earlier this month, Dr Muhammad Salim Khan, nodal officer COVID19, Government Medical College, Srinagar, warned that corona cases as well as deaths were on the rise in Kashmir, again. “Over a couple of weeks, the graph of COVID case detection, admission of COVID cases and COVID related deaths have again gone up. The complacency among the general population and resultant widespread COVID19 infection as is evident from serosurvey in Kashmir points towards that chances of transmission of infection to vulnerable populations especially elderly and persons with co-morbidities is still high,” cautioned Dr Khan, urging people to follow SOPs religiously and wear masks.

As the winter sets in Kashmir, the fear of another wave of the deadly pandemic sweeping across the region has both doctors and people on tenterhooks, amid reports that the colder regions worldwide include Kashmir, could see a resurgence of the COVID. Kashmir is bracing up for a long winter which starts by early December and lasts till March. And amid continuous dip in the mercury, experts fear COVID19 cases may rise again due to “favourable weather” for the deadly virus with social distancing and adequate ventilation going for a toss. Director AIIMS, Dr Randeep Guleria gave a detailed account of the impact the changing seasons could have on India’s COVID19 cycle. He warned that places with colder temperatures like Kashmir might see a spike in the corona cases.

“Data suggests that respiratory infections tend to become more prevalent during winters not just in India but in Europe and data for America as well especially in places which are colder than India,” Dr Guleria said. Therefore, it is likely that there could be a rise in the COVID cases in such colder places, citing two reasons why a fresh COVID19 may be seen in India including Kashmir, where winters are much colder. He said in cold temperatures, the virus survives for a longer period and therefore, there is a higher chance of people getting infected. Besides, he said during winters, people tend to crowd together indoors rather than going outdoors. “We don’t have good cross ventilation because we want to stay warm and that actually leads to higher chances of infections spreading from one individual to another,” he said.

As per the data accessed by Kashmir Scan, hospitals across Kashmir Valley have been witnessing an increase in the number of people being admitted with severe COVID19 symptoms. On December 22, six more patients succumbed to the deadly, taking the total number of fatalities to 1850, while 308 new cases were reported from across the Union territory. The total number of cases has gone up to 1,18,006 cases including 5585 active cases.

“All respiratory viral infections are more common in winters and hence there are more chances of people contracting these infections,” said a senior pulmonologist and a renowned researcher.

“The drop in temperature will play havoc with social distancing and proper ventilation of infected surroundings, perpetuating transmission. Smog is also there which could contribute,” he said.

As the winter sets in Kashmir, the fear of another wave of the deadly pandemic sweeping across the region has both doctors and people on tenterhooks, amid reports that the colder regions across the world including Kashmir could see the resurgence of the COVID

Another worry is that complications in patients with asthma, chronic obstructive pulmonary disorder and other respiratory ailments increase in winters, leading to more testing in symptomatic cases and hence more detection. Several studies and research have shown that the possibility of getting infected was more in a poorly-ventilated environment and due to spending a longer period with an infected person without face masks. In this scenario, ventilation is essential. So, one must avoid congregated settings, proximity to those with infections and observe adherence to medication as the ongoing COVID19 fatalities were a grim reminder of how fragile the situation still was. In Kashmir, people fix polythene sheets on windows during the winter months to avoid cold weather conditions. However, Doctors have cautioned it can trigger a high case load, especially in joint families.

A senior pulmonologist at GMC Srinagar cautioned how winters could aggravate the COVID19 situation in Kashmir. He said viral infections like flu could increase the chances of getting infected with coronavirus and make it deadlier. He advised that the people should get a flu vaccine at the earliest as there were chances of them being more vulnerable to the disease in the coming weeks and months. Many health experts are worried that considering that many COVID-positive people are home quarantining and regular deaths happening outside of hospital settings, the actual number of COVID deaths might be higher. These concerns have come to the fore when a significant global upsurge has been reported in several cold countries, including the colder northern half of the United States, Scandinavia, and other European countries like the UK, France, Germany and Italy.

Another worry is that complications in patients with asthma and other respiratory ailments increases in winters and that would lead to more testing in symptomatic cases and hence more detection. Several studies have shown that the possibility of getting infected was more in a poorly-ventilated environment

“We could have a surge in COVID cases this winter,” said Doctor Association of Kashmir. Quoting a study from the University of Sydney, the Association said cold and drier winter conditions could cause a higher risk of COVID infection and the increased risk is mainly because of low humidity during wintertime. The study also found that for every one per cent drop in humidity, the number of COVID cases could increase by six per cent.

The low humidity is believed to be the primary driver of virus transmission. When an infected person coughs or sneezes or even talks, he produces infectious droplets that can hang around for longer in drier air with low humidity which increases the exposure for other people. Studies have also found that respiratory viruses, including COVID19, tend to thrive in cooler weather conditions and survive outside better when it is cold.

“Low temperatures could slow down the normal mucus clearing of infective viruses in our nasal passages,” said the DAK President. “Winter is also the time when people tend to spend more time indoors when ventilation is less and social distancing not so easily achieved.” He warned that there was a possibility of a strong wave of COVID19 infection in Kashmir valley this winter and it could coincide with the annual flu season, and this doubling could cause the health system to come to a grinding halt. “We must prepare now for this new challenge,” he said.