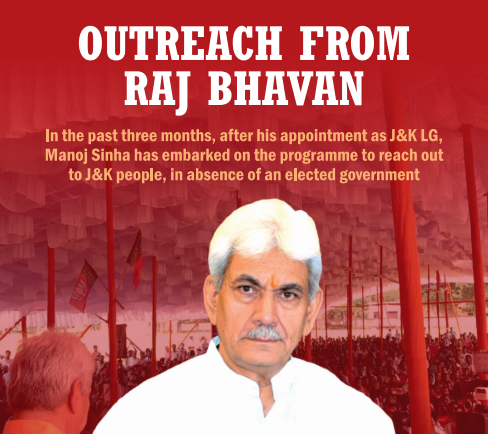 In the past three months, after his appointment as J&K LG, Manoj Sinha has embarked on the programme to reach out to J&K people, in absence of an elected government

On October 8, the J&K Lt governor Manoj Sinha walked on foot around three km to a remote village in Jammu’s Rajouri district to meet families of three youth who were killed in a fake encounter in Shopian district in July this year, and promised to deliver justice to the families.

The three youth had left their homes to work as labourers in Shopian and went out of their contact with the on the evening of July 17. They were killed by the army in a fake encounter, claiming the three youth were militants. The LG while assuring justice said the government stands with the aggrieved families and will extend full support to them. He expressed grief and sorrow over the incident and conveyed Prime Minister Narendra Modi’s message that justice will be done. The LG also assured them that the government will take care of all the three families and all assistance will be provided to them.

Amid this deepening uncertainty the LG Sinha, since the day he took over the charge in J&K, has been trying to reach out to different sections of the society through various initiatives. Sinha has been breaking all the bureaucratic taboos and security drills to engage in extensive public outreach campaign that remained absent for more than two years in absence of an elected local government

The LG’s visit to the bereaved families was seen as part of his program to reach out to people of Jammu and Kashmir ever since his appointment as the head of the troubled region. For the past, more than two years the J&K is without an elected government and people have been left high and dry to fend for themselves in absence of their elected representatives. There is no end to the political uncertainty that enveloped Jammu and Kashmir in July 2018 when the BJP pulled out the rug beneath the feet of then chief minister Mehbooba Mufti. More than a year later the government of India took an unprecedented and unilateral decision to abrogate Jammu and Kashmir’s special status under Article 370 and 35A. Though the central government had claimed that the August 5, 2019 decision will bring peace to the erstwhile state of Jammu and Kashmir and end militancy, the situation has gone from bad to worse. While there is no end to the militancy, on the political front there has been no assurance from the centre, either on the restoration of statehood to J&K or Assembly polls which are long overdue.

Amid this deepening uncertainty the LG Sinha, since the day he took over the charge in J&K, has been trying to reach out to different sections of the society through various initiatives. Sinha has been breaking all the bureaucratic taboos and security drills to engage in extensive public outreach campaign that remained absent for more than two years in absence of an elected local government. With the week of entering the Raj Bhavan, the LG literally hit the ground, driving through hilly terrains, inspecting the progress of the projects on the ground, pulling up officials for the lapses and meeting with people.  For the first time, the LG of the newly carved out Union territory of Jammu and Kashmir dumped his helicopter and decided to drive all the way to the rural areas to get the firsthand account of the development scenario and familiarise himself with the people and listen to their problems even in the tough and hostile conditions. His style of working has been unique, to say the least, which has kept the bureaucrats and officials on tenterhooks.

Within days of him arriving in Kashmir, he took a detailed visit of Srinagar’s SMHS hospital amid the raging pandemic to take stock of the facilities being provided to the patients. The visit came amid the allegations about lack of facilities and ill-treatment of the patients there. “His style of governance is totally unique. Though being the LG, he thinks as a politician and wants to engage people in all development activities being undertaken by the government. His prime focus is the welfare of the people,” said a senior official.  Sinha’s first visit to the rural Kashmir was in August as part of the programme. It came as a surprise to both officials as well as people. His long cavalcade of care drove from Raj Bhawan through Dal Lake road to Ganderbal and Kangan where he took detailed revive of he development projects including maternity hospital and several road projects.

The “Back to Village” outreach programme-III was the next target of the Raj Bhavan. “In absence of the elected representatives, he (the LG) was very particular about resuming the programme,” said another official. Though the programme was overshadowed by protests at someplace for the failure of the government to follow-up on the commitments and promises made during the previous two programmes, there were specific directions from the Raj Bhavan to the bureaucrats, officials and officers to reach out to people at their doorsteps. The official said there were strict instructions to record the grievances of people and listen to their new demand vis-à-vis development needs. The ambitious programme started on October 2 and was aimed to take the governance to the doorstep of people which is also seen as a unique effort of the Government to strengthen the newly constituted Panchayats.  During his visits to different areas, the LG gave direction to the officials to remain connected with people and inculcate team spirit and cohesiveness in the public delivery system and remain sensitive to the issues of the people. He also directed the concerned officers to stick to the timelines for completion of incomplete and languishing projects. Local issues like macadamization of roads, provision of drinking water, Back to Village works were the focus of his tours.

On October 2, the LG even went ahead and asked the militants to return to the mainstream. Calling militants “misguided youth,” he asked them to return to the mainstream and offered them financial support if they shun militancy. Sinha made these remarks at Sindoo-Shirmal area of south Kashmir’s Shopian district where he inaugurated a 100-bed Girl’s Hostel on the occasion of Gandhi Jayanti during Back to Village programme. As per an official statement, Sinha asked the misguided youth to shun violence and said the government was “ready to help with jobs and entrepreneurial opportunities”.