Home » Pushed to the edge 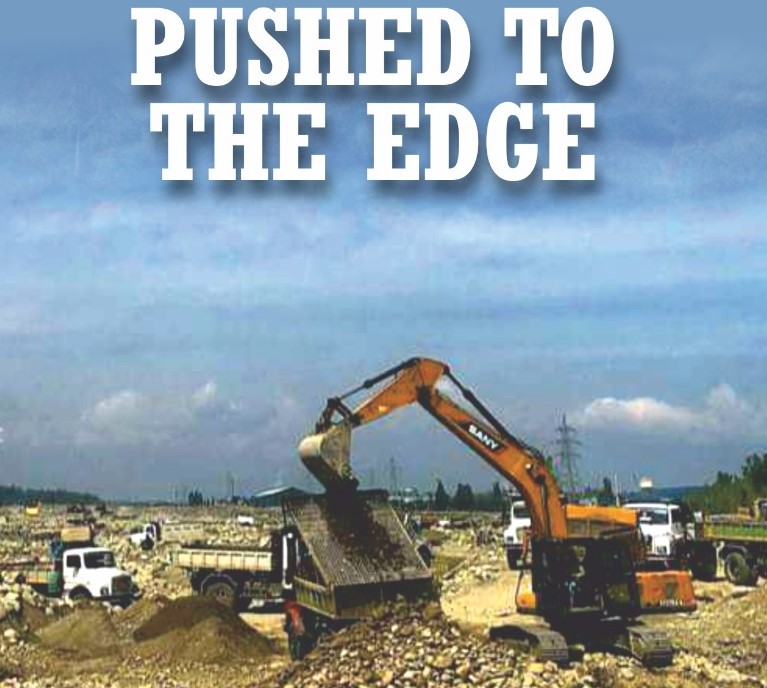 A second generation sand digger from the summer capital Srinagar, Muhammad Feroz fears tough days ahead for his family. He has been without any work for the past two months. “The days ahead are going to be tougher,” said the young man, father of two children. “I don’t know how I’m going to earn to keep the family going.”

Around this time of the year, Feroz would be busy with sand extraction and often he would return home late. Every year men like Feroz would get working contract for extraction of sand and other river bed material from river Jhelum and its tributaries for almost entire season, enough to run the family chores and make savings for future.

Feroz had even planned to build a new two-storey house. But all his dreams have come crashing now. “All sand diggers are without any work for the past two months. We have grown up doing this work. It is our bread and butter,” said Feroz.

But the only work 37-year old Feroz has mastered over the years has been snatched from him, leaving him literally jobless. The decision of J&K government’s Geology and Mining Department to tender out the extraction of minerals including sand, boulders and other material at the national level has pushed both the local contractors and sand diggers to the edge.

When the Kashmir Valley was reeling under the lockdown and internet blockade in December last year, the government invited online bids for extraction of the minerals from the water bodies in the region. This was for the first time that the government allowed contractors from all across Indian to participate in the bidding. The decision was taken after the Centre on August 5 last year abrogated Article 370 and bifurcated the state into two Union territories, J&K and Ladakh, bringing them under the direct control of Delhi.

The communication blockade meant most of the local contractors could not participate in the bidding. Those who did had to wait for hours in long queues outside the internet kiosks run by the government in Srinagar or travel outside J&K to participate in the exercise online. The internet was partially resumed in January this year when the government allowed the restoration of slow-speed 2G internet in the Valley.

Once the government started processing the bids it came to the fore that for the first time ever, non-local companies have bagged majority of these contracts for extraction of minerals Kashmir’s water bodies. There are more than 200 mineral blocks in Jhelum which originates in south Kashmir and after snaking through several districts in central and north of the Valley, it enters Pakistan administered Kashmir.

As per an official document all these blocks were thrown open for mining of sand, boulders, and material. “The government knew all along that we will not be able to participate in the bidding process owing to the internet blockade in Kashmir, but still it went ahead with the process. Now, as the things are becoming clearer, it seems the government wanted us to throw out of this business and keep the field open for the outsiders,” said a contractor, Muzaffar Ahmad.

When the Kashmir Valley was reeling under the lockdown and internet blockade in December last year, the government invited online bids for extraction of the minerals from the water bodies in the region.

According to him, more than three lakh people, from contractors to sand diggers to labourers and truck owners were associated with the mining business. “All of them will be hit hard. The new players will come in and they will bring their own men and machinery to carry out the mining,” said Ahmad. “Where will these people go who have for the years been deriving their livelihood from the extraction of sand and other materials from Jhelum?”

An analysis of the official documents accessed by Kashmir Scan shows that majority of the mining contracts have gone to the outside companies in the districts where the department has completed the bidding. All 10 mineral blocks in Srinagar have been bagged by the contractors from outside Jammu and Kashmir against Rs 5.08 crore bidding amount. Similarly, in Baramulla, 26 of the 38 blocks have gone to outside contractors while all these 38 blocks have fetched the department Rs 20.15 crores revenue. The figures are no different from other districts of Kashmir. The non-local contractors have bagged four of the seven mineral blocks in central Kashmir’s Budgam district which have fetched the department Rs more than 4.50 crore. The Geology and Mining department expects to complete the allotment of the blocks by end of this month, said a senior official who wished not to be named.

According to him more than 70 per cent of the mineral blocks which have been finalised till date have gone to the outside companies, most of them on river Jhelum. The official defended opening the mineral blocks to the outside companies saying it has led to the surge in the revenues for the department. “From lakhs of rupees, this revenue earned will jump to the crores of rupees. This, in turn, will be good for Jammu and Kashmir which has been struggling to increase its revenue base for a long time now,” said the official.

But it is the manner in which the auctioning took place that has left the local contractors and others associated with the business dejected since all the rights to extract minerals were exclusively reserved with them till last August. But following the revocation of Article 370, the mineral blocks were suddenly opened for the contractors from across the country.

“The government knew all along that we will not be able to participate in the bidding process owing to the internet blockade in Kashmir, but still it went ahead with the process. Now, as the things are becoming clearer, it seems the government wanted us to throw out of this business and keep the field open for the outsiders,”

“As in other parts of the world, the locals should have the first right over the natural resources. The unemployment graph in Kashmir is rising with each passing days and the arbitrary decisions like this one would only add to the joblessness in the region where there are no job avenues in the private sector,” said Abdur Rashid, another contractor from Athwajan.

Like his two colleagues from the locality who are into the mineral extraction business for the past more than 10 years, Rashid is also mulling option to look for some other business. “We are finished now. The outsiders came, offered high bids and walked away with the contracts. Who will look after our families now,” Rashid sighed.

The Valley’s mainstream parties too have joined the chorus to demand cancellation of the contracts to the outsiders.

“From contractors to sand diggers, labourers to transporters, who are directly or indirectly associated with the extraction of minerals, all will be in danger of losing their livelihood. Some of them, especially sand diggers have been involved in these activities for decades,” said CPI-M leader MY Tarigami, urging the J&K administration to bar non-locals from carrying on with the extraction of minerals from the water bodies. Jammu and Kashmir Apni Party (JKAP) leader Muhammad Ashraf Mir urged the government to allow the extraction of key construction material by the local mining contractors who have been otherwise barred due to e-tendering process. “The blanket ban on extraction of building material has halted all types of developmental activities both in government and private sector,” said Mr Mir.

Even the trade bodies have voiced their concern against the move. Kashmir Chamber of Commerce and Industry (KCCI) described the policy for allotment of mining and extraction contracts to outside companies as “alarming and against the public interest”. “The lack of protective mechanisms in the policy has deprived thousands of families of their livelihood and exposed consumers to exploitation by a mining syndicate,” said a KCCI spokesman. According to the figures shared by the body, the auction bid for 15 blocks in Pulwama has jumped from the previous Rs two crore to Rs 17.82 crore. “There is no way that the local contractors can compete and thus [are] disadvantaged,” the spokesman said, adding the first claim on local resources rightfully belongs to the natives of Kashmir.

But it is not only the job concerns for locals which have led to the criticism against the government, the policy involves allowing the contractors to use machinery for extraction of the minerals at a much faster pace. This is a recipe for the environmental disaster and could lead to drying up of tributaries described as “veins and arteries” of a river system.

An official confirmed that till last year the government would allow only manual extraction of minerals from the water bodies. “This would not only take care of the eco-system but also preserve the natural setting of the river system. But now it will be a race among the contractors to extract maximum minerals in the shortest possible time. This, in turn, will prove catastrophic,” the official said.